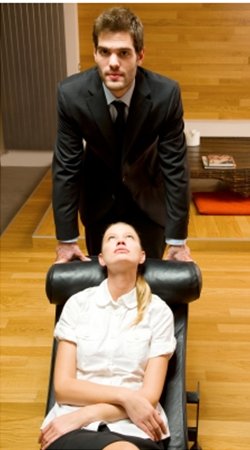 About a year ago my wife and I had some frank talks about our relationship and ways to make it better. We weren't having major problems in comparison to other couples, but we weren't as close as we had been in the past and it bothered both of us. During these conversations we both talked about our fantasies and things we wanted, and one of the things my wife mentioned was that she wanted me to take charge more. Now even though I'd left my kink lifestyle behind I still thought about it and imagined my wife as a submissive, so her mentioning this made my ears perk up. I asked her to go into more details and we had a very long discussion about her thoughts and feelings and desires. It seems that in my desire to be the best modern husband out there and making sure that everything was equal, I had been missing some subtle and not so subtle clues from my lovely bride. She wants things to be equal as well, but to a point. One of the things that she said was "I like you making some choices and just telling me about them. I have to make so many choices it's nice to just be taken care of sometimes." I kept questioning her and explained everything about my past. She knew I'd been involved in some pretty kinky things but I hadn't gone into the nitty gritty details before then. When I finished she was shocked and excited. She said she wanted more of that and we began to embark on a BDSM journey within our marriage.

Now if this were a kinky romantic comedy that would be where the end credits begin and everyone lives happily ever after, right? But this is real life and not everything goes so perfectly. I'll admit my skills as a Dominant were a bit rusty after years of being dormant and everyone is different and approaches this differently. Both my wife and I had to "find" ourselves within this dynamic. She and I matched up very well with our interests, but there were things that of course didn't match up 100% and it took some time to negotiate those boundaries. But over the course of a couple of months we found a good rhythm and were happy with where things were going in the bedroom and then we agreed to bring a little bit more of this dynamic into non-sexual aspects of our relationship.

Again cue the end credits, right? Wrong. Changing things within an established relationship can be difficult. Negotiating things within a BDSM context can bring a whole new level of delicacy to those aspects of the "daily relationship" that people must deal with all of the time. Some BDSM partners are not actually married to their partner and others have a very defined dynamic that extends from the bedroom throughout the whole relationship. That is not the case with us. It's a tricky and delicate path that we're walking on, but one I'm very happy to be a part of now. The reason I say this is because even though my wife is my submissive, we still see each other as equals when it comes to items within our relationship, but with some caveats. For instance on money issues, we make decisions 50/50 and things with raising our son we're 50/50 but other areas my wife has begun to defer to me. This is where it can get tricky for me. Picking up on the times when she is deferring to me can be difficult because she will still express an opinion and at times I will read that as something that we should be working out together. And there will also be times where she's thinking something needs to be decided 50/50 and I'll read the situation differently and make a decision. I think most of the difficulty in all of this arose from the fact that we already had an established dynamic within our marriage about making decisions and it has been difficult to look at each decision objectively now, especially with a decade of similar decisions before it. This is where the communication has to be excellent because changing that dynamic can be scary, but ultimately rewarding.

There are some who are submissive (my wife included) who think that people who are Dominants have the answer all of the time. I'll let you in on a secret, we don't. Or at least I don't have all of the answers all of the time. I think the key to being a good and caring Dominant is to have confidence in the decisions that you make and to make sure you are communicating with your partner when you aren't sure. Some may say that makes me weak as a Dominant but I think it makes me stronger. It takes a big person to admit when they aren't sure of something (think of a man driving around lost but refusing to ask for directions) and those are the times when you learn the most and that are most beneficial to you later on I think.