Loving the Broken: Three Women Coping with Marriage to a Military Man with PTSD 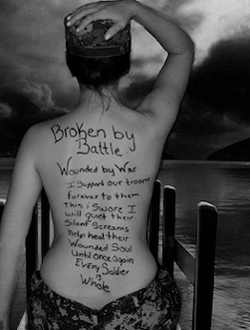 What would you do if the man you loved was taken away from you? For many military wives, post-traumatic stress disorder can effectively steal away a beloved husband.
Often brought on by traumatic events in the theatre of war, PTSD can cause crippling anxiety, intense flashbacks, night terrors, and behavioral changes. When a military man returns home to his wife and kids in this condition, the strain on the family can be crippling.

I spoke with three strong, amazing women over the past few weeks. Each one of them has a husband in the military suffering from PTSD or a traumatic brain injury (TBI).

While not all these stories have happy endings, there is hope for our brave servicemen suffering from PTSD...and hope that their wives can raise awareness about their plight. (Some names have been changed to protect the privacy of the families involved.) 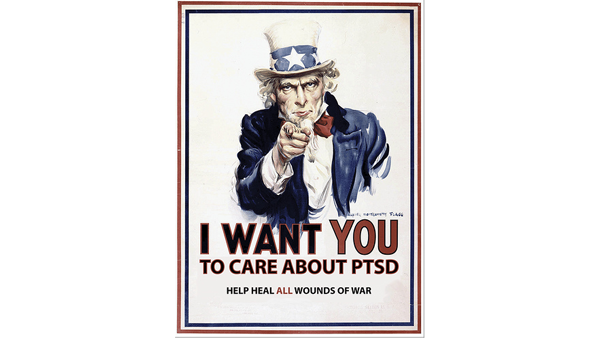 Elizabeth's husband Dale has been deployed twice to Iraq. The first deployment, in 2003, was when Dale first developed PTSD symptoms, but the second tour in 2004 worsened his condition even further.

"The military culture is to not admit to anyone you have PTSD," she reveals. "Don't let the TV commercials fool you: if you are actively serving, you admit to nothing! Though there are a lot of support groups available, it's something I know a lot of personnel will not join until they have left the military."

Despite secretly seeing a civilian therapist, Dale is still plagued by nightmares.

"I have unintentionally been struck while he had some violent dreams. I also cannot tap him awake at night [because he thinks he's] being attacked, so he swings."

But if the nights are hard, then the days can be even harder. Elizabeth says that one of the most difficult things about living with her husband is seeing him lose interest in the things he once loved.

"He can't enjoy things like fireworks, or be anywhere with spontaneous loud noises," she laments. "Watching war movies will trigger a weeks worth of nightmares. I want him to talk about and deal with the things that he holds on to, but its not always easy for me hear."

Despite the hardship, Elizabeth is committed to Dale. She doesn't see him as "broken," and she wishes the rest of the world wouldn't use that word to describe him, either.

"I wish people would understand what PTSD is, and that it comes in many forms. PTSD does not mean he beats his children or abuses alcohol. He works hard, loves his family, and tries so hard to cope." 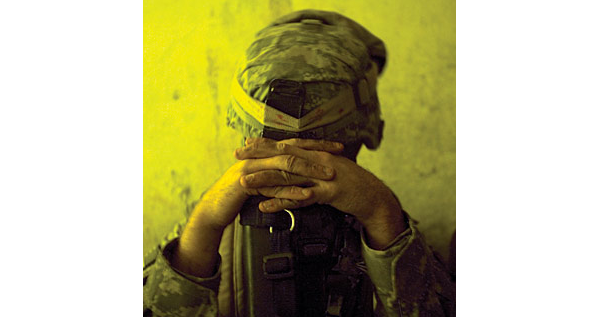 Sadly, Lana's PTSD story doesn't have a happy ending. She and her husband Alan were practically newlyweds when he shipped off for Afghanistan last summer. He came back in January for R&R, and Lana could tell instantly that he had changed.

"He was distant, and was smoking and drinking, two things I had never before seen him do, and never dreamed he would ever do," she says. "He explained his detachment as not wanting to get close to anyone because he knew he was going to have to leave again, and I could understand that."

Back in Afghanistan, things got tough for Alan. Storms cut off the supply of both food and fuel to his base, and uprisings among the locals got very intense. Alan started to withdraw from Lana again, going for long stretches without contacting her. Then came the bombshell: when he came home, he didn't want to see her, or see a therapist.

"This is not the boy we sent to Afghanistan," Lana laments. "It's as though my husband died in Afghanistan, and while his body came back, his spirit is completely altered."

"He is most assuredly suffering from PTSD. I don't know how else to explain the anger and detachment from all of us. He has been unable to handle the reality of his old life, for some reason, and I don't know what more I could have done."

Lana and Elizabeth both argue that there just aren't enough mental health resources to aid both PTSD sufferers and their family. Combine that lack of resources along with an atmosphere that doesn't encourage an open dialogue about PTSD, and many military wives are at a loss.

Ashley Wise is helping to change all that. Like many other military wives, she also faced hardship when she married her husband Rob, a loving man that was already struggling with PTSD.

In 2004, Rob had been right at the heart of a roadside bomb explosion. By all accounts, he should have died that day. The impact, Ashley eventually learned, helped to bring on PTSD, as well as a traumatic brain injury.

Not long after they were married, Ashley began to worry about Rob, recalling one incident in particular that unnerved her.

"He had gotten out of bed on a different night and stood in the dark yelling at the wall—all the while sound asleep. He kicked in the door to our son’s bedroom and lifted his hands like he was holding a gun."

The trigger for this incident? Finding a candy bar wrapper hidden under the couch, left by the couple's young son.

Then, last October, things got worse.

"He took two cases of beer and all of his guns, got a hotel room, and I saw all this come across our bank statement," she recalls. "I called him, and he was slurring his words, saying 'I don't think I can do this anymore. I might do something stupid.'"

Rob didn't do anything "stupid," but he did start drinking more. Fed up with the lack of support from the military, Ashley decided to take matters into her own hands and raise awareness about PTSD.

Her solution was both elegant and eye-catching: she uploaded a photo onto her Facebook page of her bare back, with the following poem scrawled across her skin:

"Broken by battle,
Wounded by war,
I love you forever,
To you this I swore:
I will quiet your silent screams,
Help heal your shattered soul
Until once again, my love, you are whole." 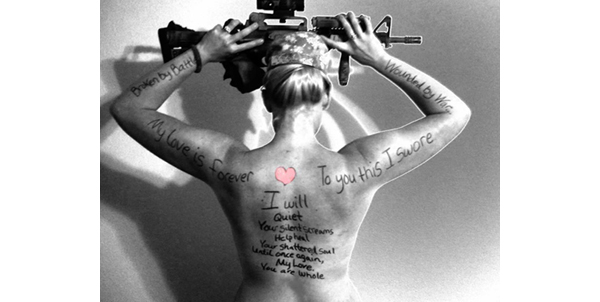 She encouraged other military wives to share similar images, and with that, the organization Battling Bare was born. After only a few short months in existence, Ashley has already gotten 25,000 Facebook Likes, set up local chapters in every state in the US, and is currently setting up her organization as a 501 (c)(3). 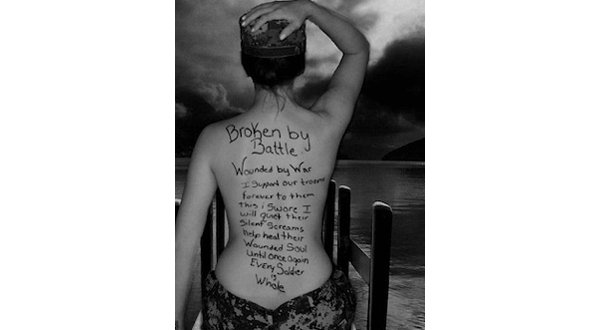 Her ultimate goal is to raise awareness about PTSD and the impact it has on spouses and children, and eventually hold workshops based on a model developed by Operation Restored Warrior.

"I want people to know that PTSD is not a life sentence," she says. "It's not a death sentence. You can get better. It's frickin' hard, but it's possible. We just need to make sure that there's a support system in place for that kind of healing."

With the work of organizations like Battling Bare, there may just be a light at the end of the tunnel for military wives and their PTSD-suffering partners.

Battling Bare is definitely worthy of your support!

Not everybody is created equal. That is, we each face unique challenges in life, some more difficult to overcome than others. From disability to dysfunction to emotional disconnection, the impediments to enjoying sex are many and varied. The Sexual Challenges Project aims to examine, discuss and educate our readers about these issues that some, if not all of us must overcome to achieve a fulfilling and satisfying sex life.