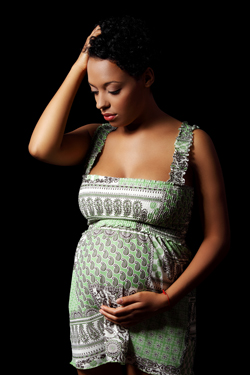 Tokophobia: (As defined by Wikipedia) described the fear of childbirth or pregnancy as a psychological disorder, when it had previously received little to no attention as such, in addition to introducing the term tokophobia (from the Greek tokos, meaning childbirth and phobos, meaning fear). Tokophobia is also widely ascribed to the fear of pregnancy, and may also be called "maieusiophobia."
The fear I have over pregnancy is crazy. I didn’t think it even had a name, but I recently found out from my doctor that it does. I’ve been even told that if I was to become pregnant, they fear I wouldn’t be able to deliver. Crazy, huh? The fear I have is that crippling. The thought of being pregnant or giving birth causes my body to tighten up, I can’t breathe, and my heart starts racing as though I’ve just seen a ghost manifest in front of my face.

A phobia of childbirth and pregnancy, as with any phobia, can manifest through a number of symptoms including nightmares, difficulty in concentrating on work or family activities, panic attacks and psychosomatic complaints. Often the fear of childbirth motivates a request for an elective caesarean section. Fear of labor pain is strongly associated with the fear of pain in general. A previous complicated childbirth, or inadequate pain relief, may cause the phobia to develop. I’ve never been pregnant. I’d rather not have sex then risk being pregnant. I couldn’t tell you where this fear of pregnancy and child birth comes from. There are two different forms of tokophobia.

Primary tokophobia is the fear and deep-seated dread of childbirth which pre-dates pregnancy and can start in adolescence. This often relates back to their own mother's experience or something they learned in school.

Secondary tokophobia is due to a previous horrendous experience regarding traumatic birth, poor obstetric practice or medical attention, postpartum depression or other such upsetting events, which renders them emotionally unable to have more children.

At one point in my life, I was freaking myself out and so worried after I had sex that I would become pregnant, even though I was on the pill and was still using condoms. For some reason, I didn’t think that was going to keep me from getting pregnant and the slightest change in my body had me panicking and rushing to the hospital.

A lot of people I know have children and some of them have extremely good births. Some of them didn’t and it seems like those are the ones that stuck with me. Even as I write this, I can feel the panic in my chest. Before knowing the name, I just thought I was weird. I thought it was something that I’d grow out of but it isn’t and that is what is so bad. Now at almost 23 years old. I don’t think it was just a teenage thing, because if it was I should have been over it.

I’ve been diagnosed with primary tokophobia, now that I know have a name to this fear that I didn’t even know was recognized by the medical world. The key is now learning how to fix the problem. This is much easier said than done. I was given home birthing dvds, which I happen to think are way more traumatizing than anything else. I mean really? Yea, I know the vagina is this awesome thing, but a part of me would rather not know how awesome the vagina is at its greatest moment, which would be child birth.

What are my pregnancy fears?

If you haven’t noticed I placed death and pain at the very top and together, because in my head I don’t know which would be worse. I know some of you may think this is a bit much, or feel like I need to grow up, but this is a legitimate fear that I have. It’s badly affected my life, and when it comes to the subject of giving birth. I don’t see it getting better. The sad part is that I WANT children, I’d love to be a mom but my fear triumphs over the want to be a mother any day. I worry what it will do to my relationship because my boyfriend wants to have children, but if I don’t overcome this, me being a mother will never happen.

There isn’t a real cure for this as of now because it’s still new, and not that many doctors know about it. My doctor is taking her own approach to helping the problem, although we’ve only just started. I don’t see this being easy to do. The trick is to reteach your brain how to view pregnancy, and that isn’t easy to do when you’ve thought one way for such a long time. My doctor thinks these following steps will help me overcome this fear. No one knows how long this will take.

Step one - Find the root cause of why you may be afraid of childbirth.
Step two - Learn the statistic on the rates of having a miscarriage, or anything else that could possibly go wrong.
Step three - Learn what actually happens during a pregnancy
Step four - Learn what actually happens during childbirth (no just perfect one, but ones that also have complications)
Step five - Once you’ve learned everything it’s time to try and change your train of thought about childbirth.
Step six - Realize that not everything happens perfectly but because it doesn’t that shouldn’t stop you from trying.

I know the steps I need to take to hopefully help overcome this fear. I can personally see myself getting stuck on step number five, because I’m stubborn. I have yet to come in contact with someone who is suffering from it and knows the name, or knows that this is even something real. I’m sharing this to let you know you AREN’T crazy and that this is something that can be treated, especially for those who want to be mothers.

I currently live with my boyfriend of 8 years, and I couldn’t be happier. I’m currently in school to become a nurse practitioner.

I’ve been part of EdenFantsys for a little over a year (My first review was published May 11, 2011) and I don’t ever plan on leaving. This has to be one, if not the best website I’ve ever been a part of. I’ve learned so much about myself ever since I joined. I currently suffer from on and off cases of vaginismus (Painful spasmodic contraction of the vagina in response to physical contact or pressure (esp. in sexual intercourse)). When that isn’t acting up I enjoy every bit of what EF has to offer.

I’m currently a mentor in the mentor program. I’ve participated in the editing program. I write reviews and I make video review. I’ve written a few articles for EdenCafe. If you have any questions or just want to make a new friend, please feel free to contact me!

Wanna buy me something awesome? My wishlist are posted below!

Not everybody is created equal. That is, we each face unique challenges in life, some more difficult to overcome than others. From disability to dysfunction to emotional disconnection, the impediments to enjoying sex are many and varied. The Sexual Challenges Project aims to examine, discuss and educate our readers about these issues that some, if not all of us must overcome to achieve a fulfilling and satisfying sex life.

Other articles by Miss Anonymous