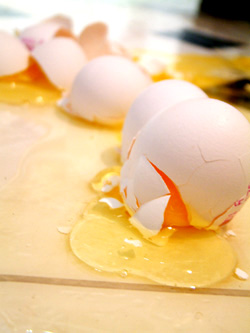 The latest assaults on the family jewels, and why you should give a damn.
If eco-sexuality seems either very far out or irrelevant, you aren’t alone; the concept baffles many who don’t quite get the importance of adopting more eco-friendly choices in the bedroom. When I was first asked to write about eco-sex, it took me several weeks to wrap my head around that first article. Heck—even ardent environmentalists have looked at me cross-eyed when I asked them to explain it to me! Since then, I’ve become a convert to safer sex in this “lovely shade of green” way.

By the time you finish reading I hope you are too. Because just scratching the surface of recent sexual health studies made me wonder if we are all part of a mad science experiment—a veritable assault on our reproductive health—whether or not parenting is in our future.

We’ve long known the importance of a mother’s diet on her reproductive health and the future wellbeing of her children. Haven’t given genetically modified foods much thought though? Since 1996, these foods have slowly been entering our everyday lives, and the potential consequences on a woman’s fertility are enough to scramble your eggs.

A leading environmental website concluded that, based on animal evidence, GM foods are particularly dangerous for pregnant moms and children. Animals fed these so-called “Frankenfoods” gave birth to offspring with more birth defects and lower birth weight. They were also more likely to be infertile, deliver prematurely, have false pregnancies, and give birth to bags of water. Granted, what happens in animals doesn’t necessarily mean it will happen in people, but in the US, incidences of low birth weight, infertility and infant mortality are reportedly rising. Could GM foods be the beginning of the end of procreative sex as we now know and enjoy it?

Helping infertile couples become pregnant via in vitro fertilization is a booming business. Now we know a common compound in plastics has been shown to reduce the viability of a woman’s eggs harvested during this procedure. The culprit is the infamous Bisphenol A, otherwise known as BPA. In a small-scale study, researchers at the University of California, San Francisco-led study found that as blood levels of BPA in the women studied doubled, the percentage of eggs that fertilized normally declined by 50 percent.

The chemical BPA, which makes plastic hard and clear, is still used in many consumer products such as reusable water bottles. It also is found in epoxy resins, which form a protective lining inside metal food and beverage cans.

Greenpeace, the green beings who coined the phrase ‘eco-sexuality,’ stated that, “scientific progress on molecular biology has a great potential to increase our understanding of nature and provide new medical tools. But until we know more about the risks, environmental and otherwise, it behooves scientists, citizens and governments to avoid “turning the environment into a giant, genetic experiment.”

Women are born with all the eggs we will ever have; better keep them nicely incubated till we need them. With men, on the other hand, it’s reasonable to conclude that because they are constantly making sperm, a few dysfunctional tadpoles here or there isn’t all that worrisome. He’ll have plenty more soon enough, right? Don’t be so sure. Funky spunk is a real and worrisome side effect from exposure to toxins.

Last year, ScienceDaily.com reported on several studies that demonstrated that a male’s experiences and exposure to toxic compounds alters his sperm, and the nasty effects are passed on in his DNA. Not only is this seen in animal studies, but human investigations are also showing comparable sperm wars too.

In one study, breathing in a pesticide tweaked male rats spunk, and their sons and daughters, grandkids and their offspring too, were born with permanent kidney and reproductive birth defects. And in another animal study, even though there was NO previous genetic predisposition, genetically slim males fed an unhealthy diet made sperm that led to their healthy-fed progeny to be diabetic rodents.

I’m seeing a puckish shade of green. What may be happening is that exposure to toxins causes some genes to be switched on, and others to be shut down. The males from that point onward continued to make DNA-altered sperm, and if my understanding is correct, this continued past the exposure to the toxin.

When DNA, the very blueprint of life, is changed, the results can be maladaptive. Proteins are made in ways that nature didn’t intend, and in this case, the result is the passing on of “altered inheritance” to the male’s progeny. Even though these results are demonstrated in animals, “trans-generational” effects have been shown in humans with regard to smoking, food shortages and overeating.

Studies like this demonstrate that long-term consequences are hitting us where it hurts most: the family jewels. In terms of environmental pollutants, we are arguably living, breathing and eating a toxic soup. What can eco-conscious lovers do? For starters, stay informed. Consume foods free from genetic voodoo. If a label is iffy, find a substitute that you know is GM free. Make sure anything plastic—from bottles to sex toys—is BPA-free, and support your local organic produce growers against the tides of mass production.

As evidence mounts, and people begin to adopt more eco-conscious choices in their personal lives, we may finally be able to score one for Mother Nature, and zero for those who want to experiment our sexual well-being. Of course, only time will tell how this translates to the ultimate survival and viability of today’s sperm and eggs, and tomorrow’s children.
Tags:
Views: 1810
Related articles