She Plays, He Plays: The Key To The G 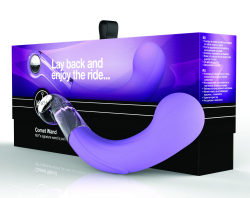 So why exactly did Jopen cover one awesome material with another? We weren’t sure, either. Then we read the Johnsons’ review. Read on to find out what Susan and Rydell think about Jopen’s Key Comet G!
“It’s so hard,” Susan says.

I wish I could claim credit for owning the object of her observation, but she’s actually describing the Jopen Key Comet G. And it didn’t take her long to provide that report. “That’s what I noticed as soon as I opened the package. I don’t know how you couldn’t.”

“I don’t know how else to say it … it’s just so hard! There are a lot of things that make the Comet unique, so I knew it would provide some new sensations, but I wasn’t expecting the hardness to be such a big deal. It seems like usually toys mold to you, at least to some extent, and that’s part of what makes them work. The Comet — aka Mr. Glasscock! — does not mold to you. Instead, you’re at its mercy. But I found that exciting, too, and part of what makes it work.”

I can’t argue with Susan about the significance of the Comet G’s rigidness, but I’m fairly certain that its shape is equally responsible (if not more so) for the toy’s ultimate success. In addition to the ergonomic curve, the insertion point boasts a good-sized bulbous head. The end result of those two design features is a wand that some users will swear has magical properties: the ability to seek out, stimulate, and satisfy one’s g-spot.

“Honestly, I don’t know if I’ve ever truly found mine, or if anybody’s ever actually hit it,” Susan admits. “I’ve never been obsessed with trying to find it.”

Speak for yourself, dear.

Susan doesn’t struggle in the orgasm department, so I suppose as a couple we’ve never made locating her g-spot much of a priority. (And, between you and me, she simply doesn’t have the patience to put off climax while I finger about for a little bean-size hot zone that supposedly has a slightly different texture than the surrounding hot zone. Hey, cut me some slack, the pussy is one big hot zone in my opinion.) All that said, who wouldn’t want a go-to “button” to push to drive his or her lady partner way over the edge? To that end, I’ve been on a semi-serious, 16-year quest to chart a consistent course straight to Susan’s Grafenberg region.

Obviously then, Mr. Glasscock has become the Clark to my Lewis, and while our expedition isn’t complete, the journey to this point has proved fruitful.

The results don’t lie, and Susan has climaxed with relative ease each time Mr. Glasscock has been deployed. “The shape felt odd at first,” she says. “But definitely good. It’s so funny how much past experiences can mentally influence the present. Even though I saw the Comet’s shape, held it in my hand and everything, when Rydell pushed it in the first time, my immediate reaction was ‘wow, this feels really weird.’ I actually had him take it out.” 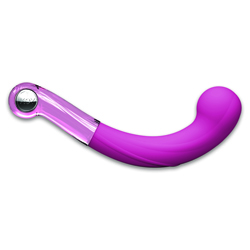 From the service provider’s point of view, that curve allows for easy and nearly flawless positioning. Because of my past experiences during many of those same play sessions, I started by trying to maneuver the Comet in and out. That’s not how this toy works. Anatomically, there’s really just one place for it to go: against the front, top of the vaginal wall. You know, where the g-spot is.

“I admit, I could feel the difference,” Susan says. “And it just gets straight to it!”

It really does, and with amazing efficiency. As our experimentation went on that night, occasionally I removed it completely — for a little tease — only to rest the head back against Susan’s opening a few seconds later. With little more than a subtle nudge, it would slide right back into place and the stimulation would pick right back up.

“And that’s when things got good,” Susan says.

“With the curve and big head, the Comet G puts a lot of pressure right against my front wall; at a different place than any other toy, and in a more fulfilling way than fingertips. And because it’s so hard — have I mentioned the hardness? — no matter how I squirm, that pressure remains constant, and intense. That’s a huge difference. You know, sometimes when you’re coming real hard you think ‘oh, I can’t take anymore’ so you wiggle around or flex your pussy in defense. Other toys yield to that movement and I can get a little breather. Mr. Glasscock does not yield.”

Indeed he does not, which is why he’s proved to be such an exceptional expedition partner and will remain at my side (and routinely inside Susan) for the foreseeable future.