She Plays, He Plays: What A Thrill 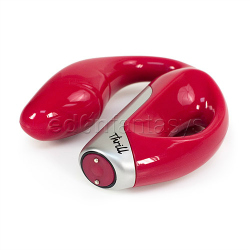 If you couldn’t tell by the picture alone, the packaging for We-Vibe’s Thrill makes the toy’s intended use perfectly clear. “Solo: for her” it says right across the top of the box sleeve.
Not wanting to challenge the directive of those three little words (at least not right away), I decided to provide Susan with some quality, unaccompanied — and spontaneous — research time.

“I’m gonna take a shower,” she said one morning after returning from the gym.

“I left something for you in the soap tray,” I replied, and then walked out of the house without saying another word.

My only concern was that she wouldn’t be able to figure out how to turn the thing on. When it comes to sex-enhancing devices, I’m all for ease-of-use, but the Thrill’s on/off/mode-selector button — a barely-noticeable nub between the charging nodes — takes simplicity to a new level.

“It’s perfect,” Susan says. “I actually love the one-button design: turn it on, cycle through the different vibrations, turn it off. Simple. And you can do it all in the heat of the moment without having to look to be sure you’re pushing the right button. Because there’s only one of ’em. Perfect.”

“I don’t know if the handle made all that stuff so much easier,” Susan says. “For me, it’s really the whole Thrill that makes achieving solo satisfaction so much easier. Cock-shaped vibrators are fun … until I want something inside me, then I lose the clit vibrations. ‘So get one with a built-in clit stimulator,’ you say. Sure, those are great, but sometimes it feels awkward to reach so far down between my legs to guide it to just the right place. I feel like I’m all catawampus to one side. And don’t even get me started about trying to use one of those in the shower, all hunched over like Quasimodo. So sexy.

“But the Thrill eliminates all of those issues,” Susan continues. “I get the insertion and the clit vibration, and because of the horseshoe shape I don’t have to reach any further than my mound to grab the handle to make all the subtle adjustments I need. So, yeah, the handle really does allow me to control the pace, pressure, and friction … And I’m not worried about throwing my back out of whack to make it all happen, whether I’m standing up or laying down on the bed.”

So, what all did happen that unaccompanied and spontaneous morning?

“Let’s just say it’s a good thing we have handles in our shower,” Susan says. Ah yes, the happy serendipity of buying a house from a lovely headed-to-the-nursing-home couple who needed a little extra stability while bathing. “Without those handles, I might’ve fucked up my back for different reasons.”

So, I can’t tell you exactly how Susan’s morning research session progressed, but I can let you in on how it (she) climaxed: steady vibrations, level three. “How’d you know?” Susan asks. If you press and hold the on/off button to power it down, the Thrill remembers which mode you were using and then resumes that same function when it’s switched back on. Elementary, my dear Susan.

“I definitely enjoyed the wave, too,” Susan adds. “It starts very light and gradually picks things up until it’s pretty intense and then slows down again. But I love that the vibrations never actually stop. They just keep pushing you closer and closer to the ultimate goal.”

My goal was to work the Thrill into our couples’ playtime, and I can already confirm that it’s fantastic during foreplay for all the reasons Susan detailed above. With most vibrators, one of us has to dedicate at least 75 percent or so of our attention to the toy and its operation and making sure it’s hitting all the right spots. But the Thrill, because it’s so easy to use and its horseshoe shape, acts as an intuitive extension of my own hand. 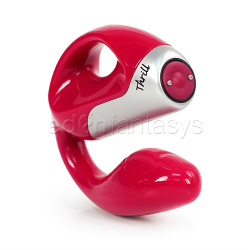 “Rydell almost always has at least one hand on my pussy when we’re warming up anyway,” Susan says. “Now he just uses that hand to guide the Thrill a bit, maybe push it a little harder against my clit or move it from side to side. And he’s still free to use his other hand and mouth elsewhere on my body. It’s really nice.”

Our next plan is to work the Thrill into actual intercourse. “I’m thinking it could be a perfect complement to Rydell during a double penetration adventure,” Susan says. “It’s not too big to make things uncomfortable, and with Rydell inside me and the Thrill hitting my g-spot and clit … well, I might need some handles somewhere besides just the shower.”
Tags:
Views: 2401