She Plays, He Plays: The Sure Things 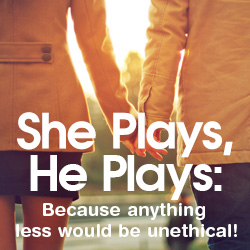 Our parent company, EdenFantasys, carries tons of products meant to aid you in sparking the sensual blazes in your bedroom. From oils to reduce friction and increase the heat, to powders to add a hint of flavor to your skin, to silky soft feather dusters meant to tantalize your lover, the possibilities are endless. But which ones are right for you? Rydell and Susan tried a few to give you an idea.
I don’t want to minimize anyone’s chosen career field or perceived personal specialty (as in, “oh, sure, that’s my specialty”), but it ain’t hard to give a good massage.

Don’t get me wrong, there is a range of good, from say perfectly enjoyable to positively mind-blowing. Enjoyable being the quick shoulder rub I get from my regular waitress at my favorite bar when she realizes it’s going to be another one of those nights; mind-blowing being the 60-minute affair I experienced some seven years ago aboard Royal Caribbean’s Sovereign of the Seas courtesy of a professional Australian masseuse named Penelope.

“Here we go,” Susan says. “The fact of the matter is that Rydell absolutely melts — I mean turns to fucking warmed-over putty — for a back rub.”

The Same, But Different 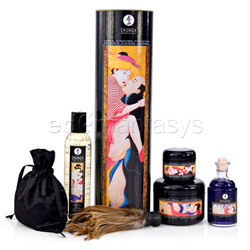 Both kits are highlighted by the inclusion of massage cream. “It’s a nice change-up,” Susan says. “Oil is great, and I was happy to get more of Shunga’s [with the Carnal Pleasures Collection] because I really like theirs in particular. Other than regular lotion, though, we’ve never used any kind of massage cream.

“I loved the strawberry smell of the Sweet Heart body soufflé,” Susan continues. “If I closed my eyes, it seemed like we could easily be out in the garden, under the sun. We weren’t, of course, we were in our bedroom, which is important to know because the main difference between the oil and cream is the ease of clean up. Whenever I’m giving Rydell a massage with oil, part of me is always worried that it’s going to get all over the sheets as soon as he rolls over — and who wants to be thinking about laundry during the build-up to sex. Both of these creams provided plenty of slipperiness, but they also rubbed in completely, and ultimately rinsed right off in the shower.”

Each kit has a bag of edible body powder, too. We’re fans. Of the intended use — which as I understand it is to create a silky sensation on one’s skin while providing one’s partner with a pleasant taste sensation as he or she plants gentle kisses all over the powdered body — as well as of Susan’s freelancing.

“I liked the taste of the Carnal Pleasures powder so much,” she says, “that I licked Rydell’s cock head and then dipped it in the powder like that old Fun Dip candy!” 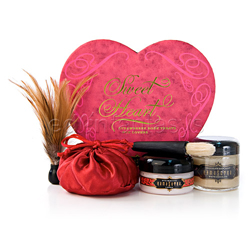 Speaking of candy, we were particularly impressed with the also-edible white chocolate body paint in the Kama Sutra kit. And given Susan’s Fun Dip comment, you can probably guess where this is going.

It’s also just fun, and easy to get carried away creating all sorts of shapes on nipples and around bellybuttons and above pussies, and the more the better because eventually it all needs to be gobbled up, and while I won’t claim it tastes as good as imported Swiss chocolate, or even a Hershey’s bar, I’d never complain about licking it off my wife.

I did think I might complain, however, about Shunga’s Sensations Balm, aka the desensitizing gel. I’m more of a heighten-the-senses-and-see-what-happens kind of guy, if you know what I mean, so desensitizing anything hasn’t really ever been my deal. Additionally, on some rather random occasion back in college, I experimented with a desensitizing product. I vaguely remember an initial tingling and then thinking that my cock felt like my mouth does after getting a cavity filled, which goes a long way toward explaining my recent hesitation.

It just so happened, though, that when it came time to sample the Carnal Pleasures version, Susan was finally getting over a stubborn illness that had put the kibosh on any relations for almost 10 days. Seemed like the perfect opportunity, and if desensitizing was ever going to prove beneficial, no doubt it was then.

I’m happy to report that my misgivings were misguided.

That’s really the best way to describe it. There was no tingling or numbness. I felt like I kept getting harder and then just teetered right on the verge of climax for the majority of our session.

“I love watching his face when he comes,” Susan says. “And he had that look nearly the entire time. It was great.”

Yes it was, and now I’ve officially added this sensations balm — along with the chocolate body paint (obviously) — to my go-to, can’t-go-wrong, let’s-have-sex supply cabinet, right next to all the other can’t-miss massage products.