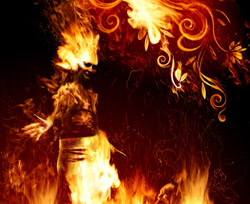 UTIs (Urinary Tract Infections) are not “teh sexay”—to some, they are the TMI of sex; but nonetheless they are a fact of life. But when they start showing up more frequently than syndicated episodes of Seinfeld, there has to be a solution.

After going to a strip club and getting a lap dance, I had big plans for my sex life…

But then I had sex.

The sex part of it was nothing to write home about. It’s what happened afterward that ruined everything.

The next day, things didn’t feel quite comfortable in the pissing department. I’ve had many urinary tract infections in the past year, but I didn’t have time to have one that morning. I was headed to the airport that day for a business trip. So I told myself that the burning sensation had all been in my head.

I went to the airport. I got on a plane. You know the 10 or so minutes during take off when you are not supposed to get out of your seat? I almost peed my pants. I blamed it on a Diet Coke.

Later in the day, my pee felt more like warm soup than liquid fire. It’s not a UTI, I told myself. “I just have a sore urethra. His penis must have bruised it.”
Yeah, I bet that happens to women all the time, the whole penis bruising the urethra problem.

Two days later I was peeing blood. I took a taxi to the ER. By the looks of things, my doctor thought I was passing a kidney stone the size of Mt. Rushmore. He ordered a CT scan. It was normal.

But my urine test was not.

He shook his head. And then he prescribed antibiotics.

Back in my hotel room, I Googled “urinary tract infections induced by sex.” I learned that some women are particularly prone to them. Some get one every single time.
Every. Single. Time.

Let me tell you something about me: If there’s a slight chance that something dire will happen to one woman, I will be that one woman. For instance, when I was pregnant, I’d read that fewer than 3 percent of mothers have breech babies. Do you want to know who had a breech baby? That’s right. Me.

When I arrived home, I told my husband, “My vagina has a ‘Do Not Enter!’ sign on it.”

And, just in case he didn’t think I was serious, I started wearing the same unflattering fleece outfit every day. And I stopped trimming my nethers.

A week later I was at the gynecologist. I told her that something was obviously wrong with my womanly bits. I told her that I didn’t want to give up sex for the rest of my life. “But what other option do I have?” I asked.

“Are you sure there’s nothing wrong with it?” I asked.

Then she told me about her Florida boyfriend. When visits him, she seduces him several times a day. After each hump, she pops a couple cranberry tablets.
“And I never get UTIs,” she said.

She wrote “cranberry tablets” on a prescription pad and handed it to me. Then she placed her palms on either side of my chin and said, “Don’t stop having sex. It prevents cancer.”

What could I do? I bought a bottle of cranberry tablets. Then I scheduled a nooner.
I showered, re-sculpted my unruly womanly bits back into a work of perfection, and I popped a cranberry tablet.

I was definitely feeling it, you know? But I was scared out of my mind, too. I crawled into bed with my husband. I looked at his member, and the first thought that crossed my mind had something to do with red blood in the toilet. It wasn’t exactly a turn on.
I took a deep breath. I told myself, You have to do this. You have to get past this.
So I got on top of him.

Eventually, my pleasure built, and, as it did, my fear ebbed.

But, as soon as I climaxed, it was as if a dam burst and a river of fear invaded my brain all over again. I popped another cranberry tablet.

And then, for the rest of the week, I obsessed over every sensation I might possibly be experiencing every single time I peed: That felt normal, right? Or was there the faintest hint of a burning sensation? Or maybe it was all in my head? Maybe I should pop another tablet, just to be safe.

By the end of the week, though, one thing was clear. I didn’t have a UTI. More important, I no longer associated the sight of my husband’s member with blood in the toilet. So I put him finding my G-spot, the strip club, and S&M back on my to-do list. Stay tuned.

Alisa Bowman
Alisa Bowman is a professional writer who blogs at ProjectHappilyEverAfter.com and here at SeXis. This middle aged mother is on a quest to recover her sex drive, her lust for her man, and some sizzle in her marriage bed. She calls it Project: Good in Bed, and she invites you to read along as she blogs about this journey here.

Other articles by Alisa Bowman