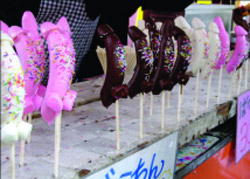 Every March 15th, the residents of Komaki, a small town near Nagoya, Japan, host the Hounen Matsuri. Known by foreigners as the Penis Festival, it is one of the many Japanese phenomena that defy Western comprehension. It’s easy to see how the message of the festival could be unintentionally distorted. On the surface, it seems like an excuse for old Japanese guys to fill themselves with cheap beer and chase girls around with bananas. Also, the predominance of the phallus throughout the shrine’s decor is startling to say the least. Honestly, if you simply stumbled into this scene without hearing the history of the event, it would all seem quite surreal. However, the fact of the matter is that this is a fertility festival and is taken quite seriously by most Japanese people. It’s about ensuring a bountiful harvest and healthy offspring.

It’s not about the penises. It’s more of a love story.

For the Japanese, the festival has genuine religious significance. The theme of fertility and regeneration is applied in more than one way. It gives residents an opportunity to pray for a good harvest; Komaki was once much more of an agricultural community than it is now, and its livelihood was dependent upon abundant crops. On the other hand, many who attend the festival are couples who are hoping to conceive a child within the following year. Some new parents bring their newborn babies and give thanks for its safe passage into the world. Basically, the idea of seeds being sown prevails throughout the day. 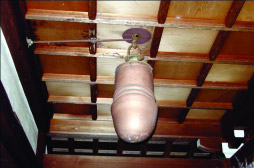 Those who wish to pray should give an offering and ring the bell.

The matsuri, or festival, has gained a great deal of notoriety over the years, which makes sense. Any place where visitors can purchase a sake set that looks like little herd of penises or an ashtray shaped like a vagina might lead someone to think that they’ve stumbled upon all-out penis worship. 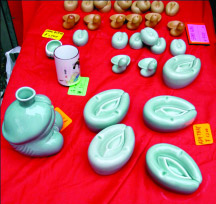 Also misleading are the penis lollipops, both circumcised and uncircumcised, in a variety of flavors and colors. 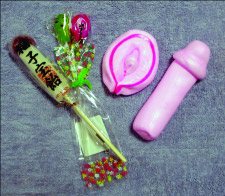 I love the way normally reserved Japanese girls will scrap for the last green dick lolly like they’re at a Filene’s Basement sale. 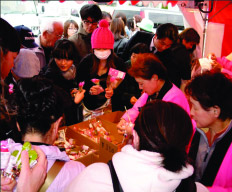 But, remember, the day isn’t really about the penises, despite how it looks when you’re full of free sake and rubbing the head of an oversized schlong for luck.

Please ignore the cock-ring garland. This is a religious festival.

The roots of this festival date back 1500 years, to the daughter of the local feudal lord. Her name was Tamahime, and she was married to a prince named Takeinadane. Upon the death of her husband, she chose to stay in Komaki and help her father develop the town. Tagata Shrine is built on the site where her home once stood. She is now considered to be a Shinto kami, or god. It’s sort of like being sainted, but I’m not sure the requirements are as stringent. You don’t have to be burned alive or stung to death by bees to become a Shinto kami. Patronage of a rural area is requirement enough.

The main event of the festival is the procession, in which Takeinadane, is returned to his bride in effigy. They also take her a two meter penis. She’s a lucky girl. The god of the harvest is also delivered to her, which sort of dampens the romance factor, but she’s the annual recipient of a six hundred pound dick, so who’s complaining? 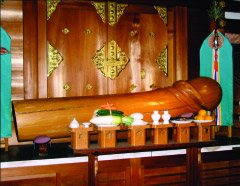 In the time before the procession, visitors have the opportunity to ask the kami for good fortune by writing specific wishes and desires on a plaque and hanging them from what looks like a little wish hut.

It seems appropriate that all of the wishes at this shrine have the same symbol on them. This is where it’s important, once again, to remember that people aren’t actually wishing for a giant dismembered penis. They’re just hoping to be impregnated by a penis, hopefully one that is still attached to a person. 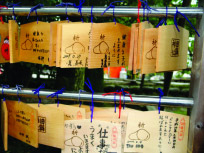 Wishes will later be burned. The smoke will carry them to the gods.

The procession begins at a neighboring shrine at two o’clock in the afternoon. Because of the weight of the mikoshi, or portable shrine, that carries the big penis, the men who carry it have to tag team in groups of twelve. By the time it reaches Tagata Jinja, it is nearly three thirty. The first sign that it has arrived is the official flag. 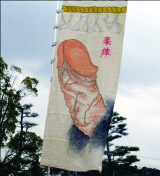 Try not to dwell on the lack of testicles.

A priest leads the procession, sprinkling salt along the path in order to purify it. Salt is commonly used as a purifier in Shinto ceremonies. (Sumo fans will recognize the practice from the purification of the ring before a match.) The priest is followed by other priests carrying offerings to the gods and by maidens carrying smaller penises. It is with the arrival of Sarutahiko-no-Okami that crowd starts to get excited. 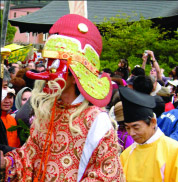 This long-nosed deity, Sarutahiko-no-Okami, is a mischievous, but powerful kami. He is also the leader of all the gods of the earth. It is only appropriate that he lead a ceremony in which people pray for renewal and new life.

The gentlemen of honor, the harvest god and the husband, arrive next, each in his own mikoshi.

Toshi-gami, the god of harvests arrives at the shrine.

For just a moment the mannequin inside the mikoshi. looks so real that the enthusiasm of its handlers is somewhat troubling. The carriers of Takeinadane’s mikoshi. rock it back and forth so violently on the way to the shrine that any human inside the float would need immediate medical attention upon arrival at the shrine. 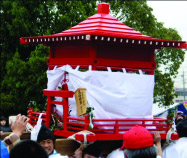 For that matter, even a spirit husband might wind up to dizzy to consummate his yearly act of physical devotion after such a jostling. Perhaps that’s why they bring the giant back-up penis.

By the time this guy arrives, the crowd is completely frenzied. Just to get the crowd more worked up, the bearers spin it in wild circles. Every one of the men who takes this last shift are forty-two years old. Forty-two is considered to be an unlucky age, so delivering the instrument of the town’s rejuvenation helps to combat their prophesied misfortune. Maybe the excessive jostling of the giant johnson is due to the sheer excitement of knowing that they have conquered bad luck. Maybe they’ve been drinking way too much sake. Either explanation is equally plausible. 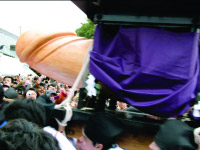 A final glimpse before the big date.

The end of the precession path is Tamahime’s shrine, where the penis of honor will remain until the following year.

In Japan, new items are considered to have more power and vitality. Therefore, a new penis is carved from a cypress tree every year by a craftsman who uses traditional tools. When last year’s penis is replaced by the new one after the festival, a private family or business can purchase it. The new owner will maintain an altar and continue to make offerings in its honor.

As is common amongst Japanese festivals, Hounen Matsuri is a mixture of religious tradition, history, and drunken fun. A complete outing would involve self-purification at the well, the giving of alms, prayer, getting completely loaded, and trying to touch a big penis for luck. It is a tourist destination, so it’s necessary to look past the English-speaking shutterbugs acting as if they’ve never seen a ten-foot penis before to see that this is an event of real significance for the local community. With that said, however, it’s also an opportunity for this guy to sit on a rock clutching his big golden dick. 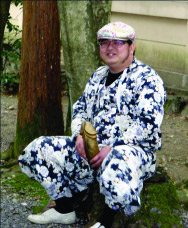 There’s something for everyone.
Tags:
Views: 1408
Related articles

Other articles by Bella Bell