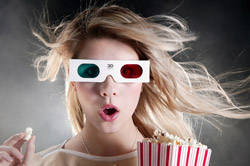 After mentally spending the Gross National Product of Ghana on sex toys, I moved to the video section. Since I would be going back to the hotel without a cute butch girl, I decided to get Crashpad. This movie should be mandatory sex education for straight teenage boys, because no one has mastered pussy like San Francisco lesbians.

I missed a few of the films while interviewing Tristan the next day [Editor’s Note: Minivan’s interview with Tristan Taormino is coming soon.], including Made in Secret, created by the world’s only underground DIY anarcho-feminist-porn collective. I made it back in time to catch clips from Bride of Sin, with Madison Young as a cheating bride severely punished by her wife-to-be. The scenes were fun, but I would rather be forced to eat a Wheat Thin off of the dildo of a woman wearing a priest collar, and then blindfolded and bound to a crucifix than kneel on a wooden pew. Amazingly, that’s exactly what happened to poor Ms. Young!

For people like me who can’t get enough of hot butches and bois, the scorching-hot scenes from Champion by Shine Louise Houston and Roulette by Courtney Trouble hit the G-spot! I was, however, confused by a scene in Roulette where a hot burglar sneaks into a house, has sex with the milk, and then leaves the mess on the floor. It just seemed rude.

The late-night show featured stag films from the turn of the century, a jilted wife cooking “special” birthday cake for her cheating husband, hot drag king cowboys singing love songs, and a person with an actual belly belly-dancing. Molly and Matie invited me and the rest of the clitterati to an after party, and we stayed out until 4:30 A.M. Although sleepy and hoarse from laughter the next day, I’d never felt so at home.

Bike Smut 3 is a collection of short films based on the idea that sex + bicycles = liberation. Bicyclists from all over North America submitted shorts that were kinky, silly, sweet and superfanfuckingtastic. Sure, I made that word up, but you watch a man literally have sex with a bicycle and tell me what to call it! My favorite was The Tour de Pants, from San Francisco. It was hot and funny, a rare event in porn. The creator of the project, a dead ringer for David Cross from Arrested Development, ended his presentation with a singing striptease. For me, Bike Smut 3 was by far the highlight of the festival, and probably should have been the finale.

The last film was Positions for Lovers: 3 Real Couples Share. I have never been a fan of “positions” films. They generally involve attractive, somewhat bland white people having vaginal intercourse in many different ways that don’t involve the clitoris. This film was different though: It featured attractive, somewhat bland white people having boring sex in Jamaica!

Host Jamye Waxman was the sexiest thing in the film. It began with audition tapes. The couples clearly cheated and choreographed their routines to match: kiss, kiss, kiss, munch, munch, munch, pump, pump, pump, jazz hands! Some rude attendees (of which I was surely NOT the ringleader) began shouting things at the screen in an effort to liven things up, and even started clapping to the soul-deadening rhythm of one man’s thrusts. If this is how normal people have sex, then someone needs to produce Positions for Lovers: When You Actually Want Her to Come, Too!