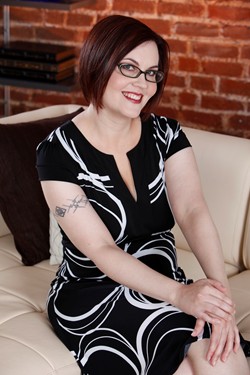 Adult entertainment succeeds when the audience truly connects to the material. Tristan dishes on what performers need to bring to the table to ensure her fans are truly satisfied.

I noticed in Rough Sex that other than Sasha Grey, the women were not 18. Was that a conscious choice?

First, I have to say that I do not shoot anyone under 21. It’s a personal thing for me. Sasha was an exception. She turned 21 last year, but when we shot that movie, she was 20 and 10 months.

I really like more seasoned performers. I want them to be able to express their sexuality. Whatever piece of their sexuality they want to show me, I want them to bring that to the table. If they are still just kind of working that out, it’s just not that interesting to me. I’d rather see people who have a really clear sense of who they are, what they want, and what they like—and it just so happens that does come with age and experience.


I also noticed that I don’t see as many implants in your movies.

But if you just happen to have implants, and I think you are an amazing sex performer, and you have something to bring to the table, like you’re a great squirter… In the G-Spot movie, an amazing female ejaculator, she gave me a great scene, happened to have fake boobs. I’d say that I tend that 75 percent of the people I work with don’t have plastic surgery, but I’m no longer going to exclude that whole segment of the industry.

People are pretty open about their plastic surgery in porn—their lips and their nose, and stuff like that, and lipo, but I don’t know anyone who’s had labia surgery. It has to have been done—this idea of perfection or symmetry or all these fucked up ways they sell it… But I’ve seen a lot of pussies in porn, and they all look really different—really different. You know big clits, big outer lips, big inner lips. It’s all over the board… I would have to ask around. It’s a pretty small community, and gossip is really easy to tap into. I’d have to ask around as to who has had their pussy done. I wonder.


Tell me about April Flores.

I first saw April Flores [perform] in Voluptuous Biker Babes, and I’d seen pictures of her. So I wrote to her and asked if she wanted to be in Rough Sex. The first thing she said was, “I’m not doing boys anymore. I’m only doing girls.” So I said, “Okay, tell me some girls you’d like to work with.” She said, “Well, I definitely feel like I am more submissive, so I want to pick a dominant woman.” Her first choice was Claire Adams. Claire works a lot at kink.com. Major Dom there. April had done one scene with Claire in another movie—I think it’s called Kiss Attack. They had super good chemistry. I said, “Great. So, are you into rough sex?” She said, “Well, kind of, maybe, yeah, but not really rough.” And I was like, “Okay, well let’s spin this out, it might be interesting.” (Because when I ask people about their rough sex fantasies, [sometimes] they go all the way to really, really intense land.) April said: “Well, I like to be spanked, and told what to do,” and I said, “Okay, let’s tease this out and talk to Claire,” and we went back and forth.

April also had this vision for the scene. It’s really all about them. They tell me what they want. People with their fantasies, as you know, can be very detailed and very specific. Like Satine wanted to be wearing a white cotton dress in that scene. She said, “It’s got to be a white cotton sundress, got to be, got to be.”

April had this idea that she wanted this very sort of girly, soft, over-the-top bedroom, where everything seemed like it was going to be really pink and really pretty, and then it had this rough edge to it. So we did this bedroom. I had never seen so much pink in my life. Just the craziest, craziest pink ever. Pink cuffs. Pink lights. I hadn’t done a lot of art direction, until Rough Sex. This was unlike anything I had ever done.

When she gets on the set, all I can say is that you fall madly in love with her—I fell madly in love with her. I can see how she is a muse for so many people, because she walks by you, and you are like: I will do anything you want. She so owns her sexuality. She is so gorgeous, drop-dead gorgeous. And the scene is one of these things where we never stopped them. We let the cameras roll and let it unfold.

Afterward, she wrote me this amazing letter. She said, “I really pushed some of my own personal boundaries in that scene, and I really felt safe doing it with you and with Claire. I really tested the waters. I went to a place that I did not know was in me, and that felt really good.” To get those kinds of letters, to say that it was not just a good day on the set, but that it actually kind of awakened something inside you that I did not know was there. Is there anything better? No, there’s nothing better! I adore her on every level.


You need to see her Bizarre photo shoot, because she is just as cute as a button.

In real life you just can’t even imagine it though. The camera can’t even capture it.
Tags:
Views: 2003
Related articles