50 Shades of Setting the Mood 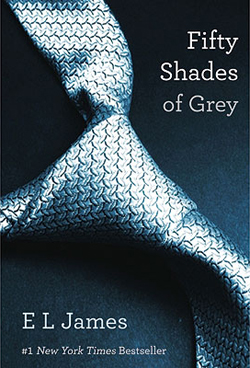 Unless you’ve been living under a rock, you’ve undoubtedly heard about the new book “50 Shades of Grey” by E.L. James. In case you haven’t, it’s a story about a woman becoming submissive to a man. And that in no way fully describes the book, I know.
What this book has done is bring erotica in some form or fashion into the spotlight of our national culture. I was flying back from a meeting last week, and stopped to buy a magazine for the plane, and three separate women in front of me were buying the book. What amazed me was not that three people in one line were buying a book, but that it was about sex and BDSM, and they were doing so without blushing or trying to hide their identity.

This book alone is not going to cause society to change its views about erotica in general, but it is a step in the right direction. Erotica is awesome and we, as a society, should be embracing our sexual side, instead of repressing it. We see sex being sold in advertising and all over the television, but in print, the written word, it is something that is ignored and hidden away like some sort of trashy thing. Erotica is a fantastic way to connect with your partner in a safe and non-threatening way, and have it be a lot of fun as well.

We began to discuss the book first in an intellectual way, and then in a sexual, sexy way. I asked her what she enjoyed within the book, and she told me exactly what points and actions turned her on the most. We wound up in bed nearly the entire weekend talking about what made us hot about the book, and then doing our best to act out what we had just discussed. We weren’t role playing and pretending we were the characters, we were incorporating it into our lives by acting out scenarios. It was some of the best sex we’ve had in years. It was incredibly hot and passionate, and showed us something that we hadn’t thought of sexually in a long time.

From there the words on the page seem to do the rest of the work. The connection that we get after this is always incredible. Sometimes she’ll describe the scenes that she was reading, sometimes she won’t. Occasionally we’ll recreate what she was reading and other times we won’t. Whatever happens is always something special between the two of us. It is always something that not only ignites the fire in one evening, but also reignites the flame in a relationship that can sometimes lose passionate focus when the rest of the world starts to close in.

This way of setting up an evening can be used in any relationship as long as there is trust between the two people in that relationship. It requires that the two be open and share what their dreams, feelings, and fantasies are. And sometimes that is the hardest part of the entire enterprise. Opening up to the person who knows you best, and telling them what they didn’t know you felt.

So, I’m glad that 50 Shades of Grey is such a hit. And while I’m skeptical, I hope that it opens up a dialogue throughout society.

Yes, that’s right. We want YOU to write something for SexIs! See this post for details!
Tags:
Views: 2140
Related articles

How do you set the mood for romance? Communication? Being someone other than "Mommy" for a little while? Our contributors have some ideas.