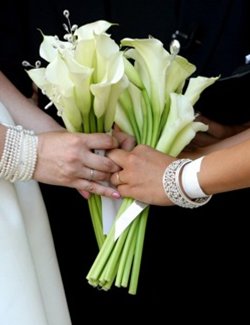 http://www.forbes.com/pictures/eilj45kegg/same-sex-couples-wed-16/
Gay marriage is a huge political issue now, with states overturning DOMA and the institution of gay marriage in several states in the last few years. Don't get me wrong--that's great. But we queers need to get our priorities straight.
I am a young, working-class, mid-western, feminist, liberal queer who is about a 4.5 on the Kinsey scale. When people ask me if I’m “for gay marriage,” I hesitate and groan a yes. Depending on who is asking, people are generally surprised.

“But what about visitation rights?”
“It’s a civil right!”
“Aren’t you gay?”

Then I get the leftist who responds, “Yeah I think marriage is a broken institution and should be abolished!”

None of these responses actually represent my view on queer marriages, although I find them each very valid in their own way. I think hospital visitation rights and parenthood rights are crucial. I think that it is a civil right. I am gay, and I don't want people to think that I'm abandoning my identity to side with conservatives--I am not against gay marriage in any way. I think queer marriages that exist now and that will in the future are beautiful relationships, and I wish all the married queers absolute happiness and equal rights. However, I also think that there are more important issues that we as a queer community need to work on. We need to insure queer people, who are disproportionately without health insurance. We need to get homeless queer youth off the street and into loving homes that support and love them. We need to educate young people about queerness. We need to focus on youth and the working and lower classes, not two people with their lives together who want to take the next step to marriage.

As a minority, queer people have to band together and organize. Without the working-class and low-income people, queer movements don’t have a chance. Every successful revolution has engaged the working-class. Why has the queer movement chosen not to? Why is there such a focus on issues for those who have no other equality problems to fight for that are relevant to their daily lives, because they live in San Francisco and work at the Human Rights Campaign? Why are fundraisers for queer organizations $150 for a plate of food when a large population of the queer movement can never afford that? We as queers need to ask ourselves why the most privileged queer people are the only ones at the table.

As a working-class queer, the gay marriage movement doesn’t represent me, and it doesn’t represent most other queers I know. Whether or not I choose to get married eventually when my class problems are eliminated is irrelevant when today, I'm not sure how to pay my bills or get proper health insurance. Beyond that, it doesn’t fulfill my duty in life to help those who have less than me. Activism isn’t about helping those who already have the most of anyone else in a given community. It’s about reaching down to mobilize those with less, ask them what they need the most, and fight with them until their life is as good as yours.
Tags:
Views: 1619
Related articles