SexIs Subjective: The Separation of Church and State...When it suits us. 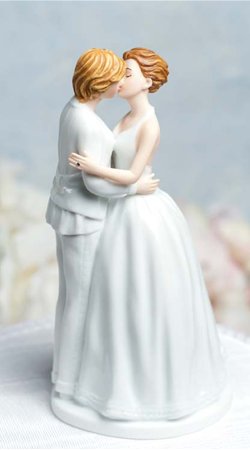 Image from My Wedding Favors ETC
At 14 years old, I thought the government was never going to let me marry another woman...At 21, I'm fighting a battle to allow myself, my friends, and my family to marry who they want--a battle of human rights that shouldn't even be an issue.
Growing up, I struggled a lot with my sexuality. I felt pressured to conform to either being "gay" or "straight" and for that reason, I "flip-flopped" between sexualities several times throughout my teenage years. For several of those years, I considered myself a lesbian and having always been moderately thoughtful about sexuality, when I "came out" I almost immediately began to consider the implications of my (new found) sexuality regarding marriage. Because gay marriage was only just becoming an issue at the time, I felt that if I didn't change my views on marriage that I had no hope of ever being able to get married. Mentally, I shifted from being the type of person that considered marriage to be an enormously important ceremony involving a number of legal documents to someone who felt that marriage itself transcended the legal process. In other words, I learned to believe that you could "be married" without ever signing a document or stepping inside a courthouse. At 14 years old, I felt that the government was never going to afford me the right to marry who I chose and that therefore the only logical thing to do was to redefine marriage for myself.

As I grew up, I learned that the "issue" with gay marriage isn't quite that simple of course. There are legal implications behind the government refusing to allow people to marry--and in situations where a family is less than accepting of their child's sexuality, these legal repercussions can cause a multitude of issues for same-sex couples.

Today my beliefs have evolved even further and I admit that I feel very strongly about the "issue" of gay marriage. While marriage itself can have a religious undertone, any marriage that involves legal documents immediately becomes a government institution as well. Throughout school it is emphasized to us that our government, for a variety of very valid reasons, functions on the principal of the separation of church and state. I believe that homosexuality is truly not a moral issue in that it does not directly physically or mentally harm another person (any more than cursing in public or wearing a rude shirt does) and that therefore the only reason "gay marriage" can be debated is entirely religious. Since our country was founded with an emphasis on the separation of church and state, this makes any argument against gay marriage completely irrelevant in my eyes. I truly believe that the incorporation of same-sex marriage into our country should not even be up for debate. The reality is that even though you may dislike something or feel that it's inappropriate or even against your beliefs...No religious belief should ever affect the legal rights of any other human being.
Tags:
Views: 1860