SexIs Subjective: Why can't I be a Wookie, too? 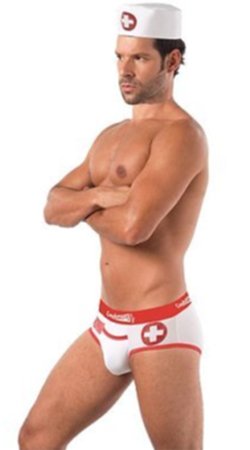 Image (c) Candyman Costumes
What if men went out dressed in themed boxer-briefs and capes for Halloween and it was women that wore scary and silly costumes? Why isn't it like that to begin with? After all, isn't the adult portion of Halloween about having fun more than anything else?
The other day, a friend and I were stumbling around the internet when my friend found a tumblr that seemed to make a rather damning case for women's Halloween costumes. The tumblr, entitled "F*** No Sexist Halloween Costumes," consisted of a series of images in which a "men's" version of a Halloween costume was presented alongside a "women's" version of the costume. "How interesting," my friend said. "Women's costumes are so sexual." This simple phrase launched us into a hefty discussion about the implications of sexy Halloween costumes. My friend was right, of course. Women's Halloween costumes are very sexual. However, I am always one to play the devil's advocate, so instead of agreeing with them, I instead replied: "Well, of course a blog like that isn't going to post any non-sexualized costumes because that would defeat the purpose of the bias. I think it's really interesting that men aren't allowed to wear sexy costumes, don't you? I mean, if a man went out wearing nothing but a thong and a cowboy hat, he'd probably be arrested for indecent exposure. Why are women allowed to wear sexy costumes but not men? And why do so many women buy sexy costumes, after all? I hear lots of women complain about it, but I see an awful lot of women that still buy them anyway. I think women like it."

Okay, okay, so that might have been a little aggressive. It really did get me thinking, though. Why do women like sexy Halloween costumes so much? And why is it that so many women are against them? Someone once told me that they felt like society seemed to pressure people into buying sexy costumes. I don't necessarily think this is true. Costume stores do present lots of sexy options, but I don't think that it's necessarily because we live in a sexist, male-dominated society where men demand that all women look slutty on All Hallow's Eve. I really think that women do like the idea of a sexy costume or two. Perhaps it's the anonymous aspect of Halloween or the opportunity to be a little "out of character" for a night, but regardless, that desire is there.

While there are undeniably more sexy Halloween costumes available for women than non-sexy costumes, I don't think the situation is as dire as some people do. There are hundreds of unisex costumes and a fair amount of non-sexualized women's costumes available to women who aren't interested in dressing up "sexy" for Halloween. The biggest issue that I see in the end is that women seem to have the sexy costume market completely cornered, whereas men have the silly/scary costumes to themselves. Ideally, I'd love to see a world where both genders could wear any costume they chose--if that means a man wearing a pair of boxers and a cape, so be it. And of course, if a woman wants to dress up as a Wookie, she should be able to without risk of mockery.
Tags:
Views: 1661
Related articles