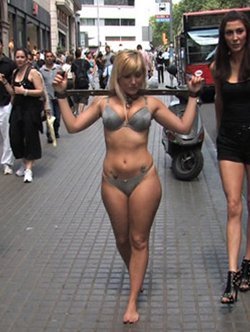 Image via PublicDisgrace.com (NSFW)
It's hard to nail down the point at which someone ceases being sexually free and instead becomes disruptive or offensive. However, it's even harder to tell how justified that offense is! I don't think that we as a society are completely where we need to be in terms of open-mindedness, but I do think that we are on the way there.
I live in Missouri. No one ever gallivants down the street naked or dares to utter the phrase “BDSM” in public. Wearing a collar or an excessive amount of PVC outside isn’t illegal, but it isn’t exactly welcome either. We have a few kinky nightclubs, but they are far from the crème de la crème of sexy establishments. In the past, driving down Interstate 70, the highway that cuts straight through the center of the state, would reveal a number of amusing and often tacky adult billboards and advertisements to the casual driver. But in recent years, various laws and restrictions have seen the deconstruction of most of these signs. I couldn’t believe my ears the first time someone told me there would be a BDSM convention near their house. They have public conventions for that? I thought, "I want to go!"

Sexual freedom is a tricky topic because everyone feels differently about it. Even then, there are two aspects to consider: sexual freedom in the confines of your home and sexual freedom when you’re out in public. How much “freedom” should we allow? So long as you’re not actually having sex and aren’t naked in public, I think most things should be allowed. Why not allow someone to wear a strappy outfit or a little extra rope. These things are legal now but aren’t necessarily welcome in many communities. Furthermore, there seems to be a constant struggle when up-and-coming adult stores wish to open a location in a new city. I can’t count the number of news stories I’ve heard of townsfolk chasing the business away. That alone is a sign that we’re obviously not quite there yet.

Sexual freedom in the bedroom, of course, is an entirely different topic. How do you balance your interests and needs with those of your partner? Is a person who refuses to do anything other than traditional sex close-minded, or do they simply have lots and lots of boundaries? After all, it’s acceptable, in a kinky relationship, to set a no-no zone. So shouldn’t traditional relationships have sexual boundaries as well? These are hard questions to answer. No one should be forced in to something they’re extremely uncomfortable with, but at the same time, perhaps there is a place where we can say “No, you are being close-minded and you really need to reconsider some things. This won’t hurt you, so you should approach it with an open mind and try it out.” I think that as a society, seeing more people approach sex and sexual fetishes with an open mind would solve a lot of the issues we have with sexual freedom. After all, it's hard to judge someone for having tried something if you tried it too at some point. I think we are getting there, though. Books and media portrayal, while not always accurate, are doing a good job getting people to at least consider breaking out of their boundary zone. We still have a long way to go, but there’s definitely hope!
Tags:
Views: 1369