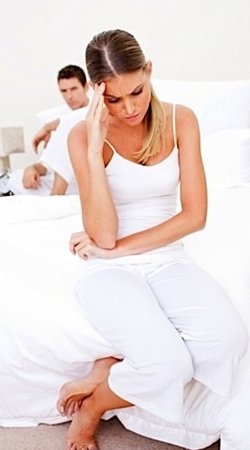 Image courtesy of http://slacktory.com/wp-content/uploads/2012/07/Unhappy-couple-in-bed-13.jpg
My fiancé and I have an agreement about sex. Our agreement is that we will not engage in sex of any kind unless I am the one who initiates it. I know, it sounds a little bit strange, doesn’t it? Maybe even a little bit draconian? I thought so too at first, but this agreement has changed not only our sex life, but our relationship as whole for the better. But maybe I should back up a bit and start from the beginning.
My fiancé and I started dating about five years ago. We met at the movies through a mutual friend and quickly became inseparable. A few months into the relationship we began "fooling around" (everything but intercourse). We were both young virgins and we just weren’t ready to take that last step. We talked about sex a great deal and communicated our desires well, so when we finally did have intercourse about a year later, it was wonderful for both of us.

Ever since then, we’ve enjoyed a fairly active sex life. About a year ago, I started birth control and we started having intercourse more often because we were more confident about not getting pregnant. That’s when things started to go a bit downhill.

My sex drive has always been lower than my fiancé’s, but it was never that big of a deal before. If I wasn’t in the mood to have intercourse, I could blame it on my paranoia about getting pregnant, and he understood that. We had a few small spats about the difference in our sex drives. It wasn’t fun, but we dealt with it and moved on. However, once I started taking birth control, that excuse was gone. If I wasn’t in the mood, I had no one to blame but myself.

And I did blame myself. I felt like a crappy girlfriend every time I turned him away. And worse than that, I started to resent him for wanting it! I felt like everything that he did (even if it was completely non-sexual) was just an excuse to get into my pants. Deep down I knew that the whole thing was ridiculous, but I couldn’t help it. I felt pressure from him to have sex, and I felt like I was putting pressure on myself to have sex. The birth control I’m on isn’t super-expensive, but it isn’t cheap either, and not having intercourse felt like a waste of money.

A turning point came shortly after we had started talking about getting married. I don’t recall exactly how it happened (this was about seven months ago), but the tensions that had been simmering between us over my lack of sex drive finally exploded. The fight that we had is pretty much a blur now, but I remember being hurt by my fiancé and ashamed of myself at the same time. I had been hoping that the issue of our desire discrepancy would simply blow over, and that we wouldn’t have to worry about it anymore. A text message I got from him during our fight changed all of that.

“No, sex is clearly being destructive to our relationship. I hate myself for it. You hate me for it. No more. No more sex. No more groping. No more naked. No more until the honeymoon.”

That woke me up in a hurry! No more sex? That simply wasn’t an option for me. My sex drive was pretty low, but it wasn’t non-existent. I was an adult in a serious long-term relationship with a man that I loved and wanted to be intimate with. How do we possibly take sex out of the equation? That was when I realized that something had to be done about our problem.

Since completely removing sex from the equation clearly wasn’t an option, our next best solution was to come up with some kind of agreement that would let us engage in sex without any pressure and without fear of rejection. Thus, the “agreement” was born. We sat down and came up with a wording for the agreement that would work best for us both. It was a bit like negotiating a contract, which made me feel more than a little bit awkward. This was our sex life we were talking about, not a real-estate deal.

It’s an awkward way to deal with an awkward situation, but we’re not the only couple struggling with this problem. In a very non-scientific poll that I conducted over at the forums at EdenFantasys, 39 people weighed in with their own opinions on the issue of desire discrepancy. I asked “In your relationship, who generally wants more sex, or sex more often?” 37% of the people who voted said that the male partner in the relationship wanted more sex and 37% of the people who voted said that it was the female partner who wanted more sex.

What it really means though, is that 74% of the 38 people who voted in the poll experience some sort of desire discrepancy in their relationships. It doesn’t really matter if it’s the man or the woman who wants more sex. What matters is that one partner wants sex more than the other partner does.

In the end, the awkwardness of drafting the agreement was worth it for the peace of mind that it provided. Our sex life has done a 180 since we implemented this agreement. Now if I’m not in the mood to have sex, I can relax and know that we really can just watch a movie without it being a pretext for something else. I don’t have to worry about getting mad at my fiancé for trying to initiate sex when I’m clearly not in the mood for it. And most of all, we can simply enjoy being with each other, whether or not that leads to sex.

Our agreement is a work in progress. We’re constantly changing and adapting it to better suit our needs at any given time. We’ve even gone off of the agreement entirely when we thought we didn’t need it anymore. It turns out that we did need it, and I was glad that it was still there for us.

Having this agreement about sex might seem pretty silly to some people, and I suppose that it is, but one important thing that the agreement has given us is a framework to discuss other issues in our relationship. Right now we’re planning a wedding and that’s causing a lot of stress and tension as we try to negotiate which family members are demanding what from us and when we need to assert ourselves. It seemed daunting at first, but we’re finding that the communication skills that we’ve been developing over the last year (in part due to our agreement) are invaluable to us.

So that’s it, our sex-agreement in a nutshell. Will it continue to help us as the years go by? I don’t know, possibly. What will help us is knowing that we can always talk to one another and always trust one another to be honest about our needs and feelings. Will there be other issues that we will have to deal with in terms of our relationship? Of course, that’s life, but I know that we’ll be prepared to face whatever challenges lie ahead of us. Whether they’re bedroom related or simply life related, we’ll be ready, and our agreement will always be there to help us when we need it.
Tags:
Views: 2361
Related articles

You can check out my stories here.

I've got a new review up for Evolved's Desire and a follow-up to my review of nJoy's Pure Wand.

My first article for SexIs was just published. It's about dealing with desire discrepancy, and you check it out here.

If you are so inclined, you can also check out a blog I've started for my reviews: Septimus Reviews