When the John’s a Jane 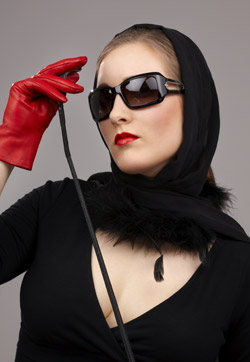 A look at women who pay for their pleasure, and the sex workers who satisfy their cravings.

From Call Girl to Calling the Shots

Just because it’s not talked about doesn’t mean it’s not happening: Women, like men, are paying for sex. Recent years ushered in the prominence of feminist sex shops and sex worker rights activism, causing women across the country to think about the sex industry in new ways.

Armed with expendable income and encouragement to claim their right to sexual pleasure, women could become consumers in a field previously reserved for men. However, the notion of a female client is not entirely new. Circa 1980s American Gigolo paved the way for the 2009 HBO series Hung, and Xaviera Hollander’s bestselling memoir of the ’70s, The Happy Hooker, describes several women who were regulars of her call girl agency.

To be sure, women still use men to gain entry into the world of sex for sale. Some strip clubs still don’t allow women inside without male companions. And the phenomenon of women and men exploring the sex industry together, as couples, has become widespread enough to warrant categories on popular female escort advertising forums like Eros.com and Datecheck, where providers can now specify whether or not they’re willing to see such a pair. Some escorts even list separate prices for couples on their personal websites or to add text assuring site visitors that they’re couple-friendly. Yet increasingly, escorts and courtesans throw in a line about their willingness to see single women as well.

Courtesans, for those unfamiliar with the term, are modern day escorts who offer multi-hour or multi-day sessions to clients who want to enjoy a connection beyond the carnal, and they’re not just catering to men anymore. A small subculture of male courtesans has sprouted up online, complete with its own message board where clients can share reviews of their experiences and ask questions about potential dates. Alex Logan is one such working gentleman, and on his website he presents a succinct view of the forces at work in supporting his profession:

“As our society has evolved into a more egalitarian and a less judgmental one women have been afforded opportunities to explore dimensions that heretofore had been generally open only to men. It has become far more acceptable for a woman to wish to spend time with a quality gentleman without the complications of a commitment or a relationship.”

In a conversation via email, Logan cited the increased income and mobility of working women as important components in his own viability and that of his colleagues, all of whom refuse to see male clients.

Since it’s common knowledge that women can have sex anytime they want, misconceptions around female clients are easily anticipated: These women must be ugly, socially inept, or otherwise undesirable. However, the male escorts I spoke with were unanimous in rebutting such stereotypes. “These are beautiful girls; they’re not who you would think,” one explained, after mentioning he’d been contracted to pose as a boyfriend during public functions as well as to deflower a virgin in her early twenties.

Professional women seem to be the target demographic for many of these men. “[Such women often] do not have the time or energy to seek out [long-term] companions,” explains another paid companion, Miguel Rivas. Male escorts may also present a more physically attractive and in-shape package than usually offered at the local bar.

Why buy the cow when you can get the beef for free?

Storm Astor, an international companion, confirms that he’s been hired by a variety of women for a variety of reasons, but what all have in common is the desire to be completely catered to and satisfied. This treatment is hard to come by in random hook ups and brief relationships: “Sure, a lady can get sex anywhere in a bar or a night out without paying for it, but tell me how many walk away completely satisfied and happy?”

Ryan St. Germain, a former webcam performer, found that his most regular female client even became possessive at times, and eventually spent so much time in private shows with him that she became nearly half his income. (While gender assertions over the Internet are notoriously suspect, this particular customer not only sent pictures, but spoke with St. Germain by phone.)

Mistress Alex, a New York Domme, affirms that women are often looking for an experience just as sexually intense as that sought after by male clients. One of her female clients complained about unsatisfying sessions with dominatrices she’d hired in the past; the providers seemed to be holding back because their subject was a woman and therefore presumed to be more delicate or less lusty.

Alex has ventured out into the sex industry as a client herself and found the exploration to be similarly disappointing. “I ended up getting a really expensive nude backrub,” she says. “They were kind of baffled. Maybe they weren’t into women.”

Yet many female providers relish the opportunity to work for a woman. Malice loves female customers and even markets herself specifically towards them: “I worship them … It’s amazing that I get to dance for women more than men. I do it for the love honestly, it’s hard to even take their money.”

Kat claims that a lesbian regular patron of hers was “one of my favorite customers of all time.” Even men who are marketed towards other men—as was St. Germain when working on the “guy side” of his webcam site—might appreciate the occasional female customer. “Women [were] more inclined to explore than male clients,” says St. Germain. “I found it more satisfying working with a female client because I felt like I had more ability to contribute to the fantasy. I often felt I was just a physical manifestation of an existing idea with a man.”

Although single female clients are still regarded as the unicorn of the sex industry, change is in the air. The straight male escorts I spoke with all seemed convinced that demand for their services would grow in the coming years, and female audience members are already a fixture at strip clubs, where not long ago they were a novelty. Female porn consumption is now taken for granted and sex toy parties are de rigueur in many circles. At the moment, the vast majority of American women are ignorant of the sex-for-pay opportunities that exist for them, and those beginning to explore their options may be unhappy with the sampling (which, compared to the glut of service providers for male clients, is paltry), but both of those circumstances may soon be a thing of the past. As social sanctions lessen and financial freedom increases, women may well demand for themselves the sexual outlets men have been enjoying for centuries.

(Thanks to all interviewees, and to Armand for additional insight.)
Tags:
Views: 1134
Related articles