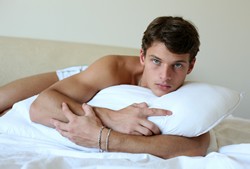 “Being straight I was like, Well, how far do I want to go with this?” Chris says. “It’s really not easy for me to fuck (a guy) because I’m straight. So how far could I take it?”

It turns out, Chris could take it as far as he wanted to. His sessions with men are now his foremost form of occupation, and though it’s “definitely difficult to get a hard-on,” he manages when the situation requires it because he “doesn’t like to turn down anybody.”

“I don’t believe straight male escorts [who only see women] can work full time,” says Ben, a New York hustler. “I’ve had a small handful of female clients over five years, but it’s not worth cultivating.” Ben identifies as straight, yet sex work is his primary source of income, too, and the sex he has for work is almost exclusively with men.

Given the scarcity of female clients, there are clear financial incentives for men to go against the grain of their sexual orientation. If someone of any gender wants to make their living in the sex industry, they’re almost assuredly going to have to cater to men.

Conrad, a straight 36-year-old working in New York, explains that male clients are not only the bulk of the demand side, they’re also preferable to female clients. “Women are emotionally different than men. They don’t make great clients like men do,” he explains. “Women require more time to get satisfaction, and they’re not used to paying. I prefer to work [with] men. It’s easier for me to have a separation between my work life and sex life.”

Chris agrees that “work is all about hustling guys” and that he’s not sure he would choose to see women because of how it could affect his personal life. “[Work as it is now] has nothing to do with my personal sex life,” he says. “Just like women I know who are straight and escorts: They’re repulsed, totally detached. It’s a different experience [with clients] than with someone they’re dating.”

Part of the incredulity gay for pay workers face is tied to the trouble most people have in recognizing that any type of sex can be work, meaning that sex can be something one trains his or herself to do well in spite of a lack of arousal. Chris makes a good point: If women can sexually service men they’re not turned on by, why can’t men do the same? There’s no guarantee that just because someone falls into the half of the sexes to which you’re usually attracted, you’ll be attracted to that specific person.

“I’ve learned to be turned on by the domination aspect,” Conrad says. “It was hard at first, but I’ve been getting used to the idea since I was 16, thinking about stripping for men [at the suggestion of a friend] and then, at 20, actually doing it. It’s been a healthy learning process.”

After admitting that most of his performers were straight, Duroy added that he himself “wouldn’t be able to be ‘straight for pay,’ and I can’t imagine that a really straight man would be able to perform the way our models perform, no matter what they think they are.” (Emphasis added.) Regardless of how adamant any given male performer is about his own sexuality, those around him are confident that they’ve got it right and he’s got it wrong.

Not only is the fundamental conclusion that penis is king, but also that if a man is capable of participating in a certain type of sex, regardless of his level of enjoyment, that sex must be what defines him. This stems from the unavoidably homophobic idea that a straight man should be violently repulsed by the idea of sex with another man, and if he can quell or repress that reaction—or if in its place is merely a lack of attraction rather than vehement rejection—the guy in question is gay. According to this mentality, a man is straight not because he prefers sex with women, but because he’s incapable of having sex with men. If you fail the test of incapability, it’s proof that you’re gay.

Which brings us to the million-dollar question of how a straight man can get hard or ejaculate when he’s with another man. The most obvious answer is Viagra, but self-control, imagination, and practice also play a part. In other words, you become a professional, and develop skills that allow you to work successfully in your chosen capacity.

Ben partially circumvents the arousal issue by working as a bottom, ensuring that the session doesn’t entirely depend on how his genitals perform. “A lot of my clients want to see me come and get hard,” he says, “but some don’t care. I prefer those who don’t care.”

As a dominant, Conrad finds that a lot of his clients don’t express their expectations. “But usually, it is important for me to get hard,” he admits, “so they feel like they’re satisfying me. But I don’t come unless I really have to, to keep somebody interested. I use Tantric sex now, so I have more control.”

When asked about difficulty getting turned on, Chris is pragmatic. “Yes, [the work] can be [repulsive.] But money is a huge motivator,” he says. “I’m more repulsed by the idea of having a day job in an office than having some guy put his mouth on my dick for 20 minutes.”


(Thanks to Brian O’Brien of Fleshbot for additional sources.)
Tags:
Views: 1506
Related articles