Valley of the Real Dolls 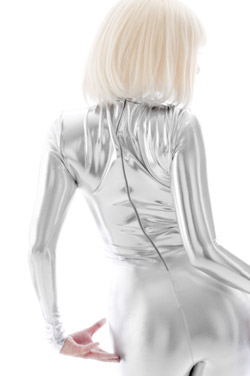 Things that look human but aren’t, are creepy. Or loveable, depending on your capacity for anthromorphism. Or beautiful, depending on your aesthetic. Or perhaps a bit of all three at once, which explains the American public’s conflicted fascination with life-sized sex dolls and even the first impressions of doll users themselves.

“[I found] them super attractive,” doll owner Paul Cupidon reports, “and at the same time I was finding it creepy. It was uncomfortable to want to have sex with inanimate objects that looked so realistic.”

Howard Stern himself, a notoriously unapologetic assholes and an early champion of doll sex, admitted that while it “can feel good, you feel like a real douchebag doing it.”

Doll owner Szalinski said that he preferred having a full size body because “hand-held toys always gave me an eerie ‘Charles Manson’ like feeling.” Yet in opting to avoid “disturbing” disembodied items by selecting a toy in complete human form, Szalinksi, in the eyes of some, went from being vaguely icky to full-on potential rapist, regardless of his sensitivity to female desire. “[Some of what I do with my doll] I likely wouldn’t even ask of a real woman because she probably would not enjoy [it],” he says.

Cupidon echoed the sentiment: “I had this conflict between my respect for real women and these objects you can use to suit your needs in ways that would be morally unacceptable with a human.” Online and in print, doll owners are under constant suspicion of being serial killers, necrophiliacs, and women-haters. The far less sensational reality is that they’re largely a group of seemingly stable, self-aware individuals who have had or do have human romantic partners.

A Different Kind of Monogamy

“Phil,” a retired Navy man in his 40s, bought his first doll only a year and a half ago, while in a relationship with his current girlfriend. “My dolls help me resist the urge to stray,” he says, “because my RG (real girl) and I have drastically different libidos.” He describes their relationship as “monogamous, loving, stable, and healthy.”

“Midiman,” married and “out” in his community as a doll owner, maintains several sites related to dolls and owns a total of 13 with one more on the way. (There exist many brands besides the famous Real Doll, including the lighter weight BoyToys and the softer, less realistic TeddyBabes.) “I am happily married. And I very much appreciate the beauty and sexuality of women,” he said. “[The dolls] help to balance libido without introducing a third party.”

Dolls not bought primarily for sex or companionship are often intended for use in pictures. This is how Szalinksi first came to own one, and while he has used her sexually on occasion, his primary concern is keeping her in pristine condition for pictures and “that means setting limits.”

Even professional photographers, like Anoush Abrar, are channeling Hans Bellmer with their work with contemporary sex dolls, though none does a better job than fashion photographer Stacey Leigh. In Leigh’s images, dolls are dewy and flawless, fully or nearly nude, and sometimes, as was the case in her recent recreation of a Helmut Newton shot, one can pass entirely as human.

That photogenic allure inspired Caroll, a 40-year-old Australian woman, to buy a doll of her own about a year and a half ago. Though she didn’t explore her doll sexually until several months after it was delivered, she found the experience “very satisfying.” She’s currently single, but Carroll says her dolls have never provoked a negative reaction from her girlfriends.

Yet negative reactions still abound online, where commenters don’t hesitate to suggest that doll designers and owners be “publicly impaled” because they are “nasty” and “”perverted.” Such extreme reactions, sadly, have been exacerbated by irresponsible social commentary. In 2005’s Still Lovers, Elisabeth Alexandre writes that she and photographer Elena Dorfman specifically sought out men who preferred their dolls to actual women rather than establishing first if this was representative of the doll-owning majority.

She closes with the point that while Real Doll owners are “harmless,” they share the “cheap misogyny” of “women killers and flesh eaters.” With fellows like doll “husband” Davecat, who once said that just as those allergic to flowers can enjoy artificial blooms, “artificial women serve the same purpose for men who are, in whatever way, allergic to real women,” it’s no wonder misogyny earned a mention. (The line about cannibals, however, still seems just a smidge over-the-top.)

Several of Still Lovers less-than-charming subjects were subsequently contracted to appear in the 2007 British documentary Guys and Dolls, thereby assuring that that specific sampling would be reinforced as the norm. Yet if what I found was any indication, the doll-as-complete-human-stand-in phenomenon has been wildly overhyped and wildly over-criticized. We’ve all felt some affectionate toward, affinity for, and even, impossibly, empathy for inanimate objects, be it a stuffed animal, a Precious Moments figurine, or a car. While most of us might not go as far as to make such a connection the centerpiece of our lives, it doesn’t seem in any way indicative of a tendency to kill living beings. Wouldn’t we have an awful lot of murderous children, plastic toys in tow, if it were?

When Meghan Laslocky covered dolls for Salon in 2005, she furthered this silly association by writing about the “horror film” circumstance of one man finding a dismembered Real Doll in a dumpster—apparently not taking into account how difficult it would be to dispose of a Real Doll should an owner no longer want it. This raises the question: Are doll owners dysfunctional weirdoes for caring about their toys in the first place, or are they sociopaths for not affording the doll a human’s burial once it’s no longer of use?

With less than 4,000 Real Dolls in circulation worldwide, there’s little evidence that dolls are positioned to become commonplace as masturbation aides, let alone common as life partners. When people, usually women, panic about the idea of dolls replacing living females, they display an alarming lack of faith in the joy of human interaction. A speechless, thoughtless silicone lump isn’t satisfying anyone’s desire for true companionship; either the desire for real human company wasn’t there in the first place, or a doll is an unsatisfying substitute. All of the people I spoke with thought the dolls were amusing diversions or simply well made tools, not improved versions of human beings.

“[With a human partner], I don’t care much about age, skin color, or breast size. It’s the whole woman who creates the attraction.… A doll doesn’t have a personality, she can’t talk, can’t think, can’t be nice or funny, she can only be pretty. So she’d better be damn hot, since it’s the only thing she has. I know that dolls are just objects, and that human women deserve a lot of respect, so just the idea of comparing makes me uncomfortable. We compare them [only because] the goal of a sex doll is to make you think you’re having real sex.”

For Midiman, the soon-to-be owner of 14 dolls, it’s all pretty clear-cut: “No doll can hope to emulate a real female.”


(Editor's Note: A real female can emulate a doll, however. The above pictured woman is flesh and blood, not a replicant.)
Tags:
Views: 5246
Related articles