Game of Thrones: Marriage Holds the Realm Together 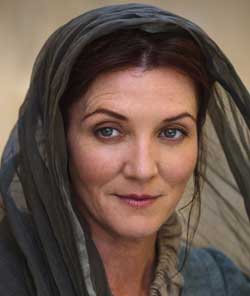 Catelyn Tully from Game of Thrones
In today's world, marriage for political reasons is pretty uncommon. But just a few centuries into the past, arranged marriages were a vital part of government and politics. In the medieval fantasy-world of Game of Thones, marriage within the ruling families is almost entirely political and critical to the stability of the Seven Kingdoms of Westeros.
Welcome back to our series on sex and gender issues in HBO’s Game of Thrones. If you aren’t caught up on the show, then you might want to clear out your DVR before reading any further, as there are spoilers a plenty coming up. Also, if you haven’t already, make sure to check out last week’s article on the Master of Whisperers, the eunuch Varys.

Way back in episode five of Game of Thrones, titled “The Wolf and the Lion,” King Robert Baratheon and Queen Cersei Lannister shared a rare private moment together. The scene was made all the more unusual because not only were the two civil to one another, but they were practically pleasant. The key moment in the scene, however, came when Robert remarked that he didn’t know what holds the Seven Kingdoms of Westeros together. Cersei answered that it was their marriage, prompting sad, fatalistic laughter from the both of them. Skip to about the 2:50 mark below to catch the exchange.

While certainly some people within the world of Game of Thrones marry for love, marriage is more an act of diplomacy than affection for the nobles around which the series is centered. Robert and Cersei laugh at the thought of their contentious marriage holding the realm together, but they both know it to be absolutely true, because while a Baratheon might sit upon the Iron Throne, it’s Lannister gold that keeps him there.

Something that, perhaps, has not been made clear enough in the television version of Game of Thrones is that Westeros, as a single kingdom with one absolute ruler, is a relatively new invention. Prior to the arrival of the Targaryens from Valyria, the continent was divided into sections, with seven independent kings, many of whose lines later became the great houses of Westeros, including the Starks, Arryns, Lannisters, Baratheons and others. The Targaryens conquered the original Seven Kingdoms, uniting them largely through their common fear of the Targaryens’ dragons. But, when Robert’s Rebellion effectively wipes out the Dragonlords, there’s little left to hold the new ruler’s kingdom together.

So, what’s with the history lesson then? The upshot is that the primary thing used to unite the disparate territories of Westeros since Robert’s Rebellion (and stretching even further back if you want to get crazy and talk about Dorne) has been arranged marriages. This should come as no real surprise as A Song of Ice and Fire takes place in a medieval fantasy setting, but being cognizant of the kingdom’s overlapping allegiances can actually ratchet up the already-high drama levels of Game of Thrones, even further.

First let’s take a look at House Stark, formerly the Kings of the North. Since Ned Stark and Robert Baratheon grew up together as wards of Jon Arryn (the deceased former hand of Robert), House Stark’s support of the Baratheon reign was a foregone conclusion. But in order to further cement the unity of the Seven Kingdoms, Ned was married to Catelyn, the daughter of Hoster Tully. While the Tullys weren’t kings under the old scheme, with the arrival of the Targaryens, they rose to become one of the major houses of Westeros. So Ned’s marriage to Catelyn was an excellent match for both houses. Similarly, Hoster Tully married his other daughter, Lysa, to Jon Arryn, who is of the same line as the old Kings of the Vale.

Like the Tullys, the Baratheons were never actual kings, but instead rose to power with the arrival of the Targaryens, taking control of the Stormlands. Because of his relatively lower stature, it was all the more important that Robert link his newly royal house with a particularly old and powerful family, which led to his union with Cersei of House Lannister, formerly the Kings of the Rock. In a very real way, the multitude of inter-house weddings throughout Westeros ensure that things keep running smoothly, with the marriage of King Robert and Queen Cersei the most important among them — up until Robert’s death of course.

This is why the proposed marriage between Sansa and Joffrey was so important. While it was certainly a condition upon which Ned became the Hand of the King, it also served a far more crucial role, uniting the Starks, Tullys, Baratheons and Lannisters — four of the realms most powerful families — in one single act. Thus, Sansa Stark isn’t merely a hostage, she’s the only remaining hope of maintaining unity across Westeros.

On the most recent installment of Game of Thrones, titled “Baelor,” we actually got to see the planning of one of these strategic marriages. Though Lord Walder Frey is a sworn bannerman to Catelyn’s father, he is notoriously inconsistent and tends to be prickly about his massive family’s status as a somewhat lesser house. So, when Catelyn goes to Walder, hat in hand, he takes the opportunity to link his family with the Starks, promising one of his daughters to Ned’s oldest son Rob. Since his daughter will eventually become Lady of Winterfell, just as Catelyn Tully did, this improves Frey’s status, raising him almost to the level of his liege lord Hoster Tully.

Even across the Narrow Sea, the strategic importance of a well-planned marriage is not taken for granted. In fact, Daenarys Targaryen’s power comes not from her royal lineage, but rather from her marriage to a massive brute of a man, Khal Drogo, who reached out and took everything he wanted, much like Robert Baratheon did.

Though Daenarys and Cersei both married inspiring, violent warriors, that’s about all the two queens have in common. Next week, following the final episode of Game of Thrones, we’ll be taking a look at how both Cersei and Daenarys wield their womanhood, but to very different effects, taking into account scenes from throughout this first season.

Do you have something from the show that you’d like to see discussed? Let us know in the comments below! Then, make sure to check back next week after the season finale of Game of Thrones, airing this Sunday night at 9pm on HBO.
Tags:
Views: 1120
Related articles