I'll have the cheeseburger, please. 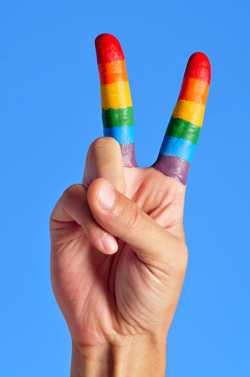 shutterstock, nito
Imagine a world where true, pure love was between two men, and two men only? Or if a man had genuine love for a woman, beyond reproduction, he was in some way seen as inferior? A world where the most sacred relationships were bonds between a teacher and his disciple, where these two men would be together in all ways: intellectually, spiritually, and sexually?
We wouldn’t have to go back far to find it. It’s only Rome and Greece after all.

It’s amazing what culture and time can do to the human race. Sure, we’ve done away with the whole “women inferior” bit (mostly), but since then we’ve done an about-face on homosexuality. What was once considered sacred is now an “abomination.” How does this happen?

In the United States, we have eight states that allow marriage between same sex couples; we have twelve that explicitly ban it. Then you have the states that grant limited rights and the ones that still have no idea on how to treat same-sex marriages.

Now, I’m going to propose a theory. I’m probably going to be dodging rotten tomatoes after this, but here goes. I’ll put out a disclaimer and say that I am in no way condemning any one group or affiliation. It’s not my intention. This is more of a working theory. A brainchild of mine.

The North Carolina vote was the catalyst for these thoughts. Maybe we shouldn’t have been surprised, but I bet a lot of us were. Perhaps too many of us felt confident the vote would be more “live and let live.” Outrage was, and still is, a common feeling from these results. How could these voters condemn a whole group of people? Was this hate or something else? Maybe the issue isn’t just same-sex marriage, but something deeper, something more. To these voters, maybe something at their core responded to this vote. By voting against the issue, what ways did this benefit them?

While we may not always agree with people, it’s beneficial to try and think of their views and see where they’re coming from. It can be enlightening. It can sometimes turn that anger and frustration to a sober (but still disagreeing) understanding.

Sure, there are some people out there who have hate in their hearts. but I think those people are the minority in this situation. However, I think there was a feeling more primal that directed many of those North Carolinians to come out and vote that day.

“What would this majority have to fear? They’re not being discriminated against! Heck! This doesn’t even concern them!”

But it does in some ways. The fear of change. It’s a common fear and all of us have probably had it in one way or another. Fear was probably a significant factor in this vote, along with one other thing.

Control. This could be what the heart of it has been about the entire time.

Think about it: religion has edicts, rules, or ideas imposed on its followers. For example, those of Jewish faiths choose not to consume pork. Catholics and other Christians follow Lent. Muslims have sacred fasts. The list goes on and on.

While some of these practices hold a deeper spiritual meaning, it does control a group of people. And if an entity can control what you can eat or do on certain days, it could control more.

Like how you can have sex. When you should have sex.

And even whom you can have sex with.

Human sexuality is beautiful and so very personal. Yet, restrictions on sexual activity are in many of these teachings. Maybe it’s because you grew up with this community your entire life. Or your family is deeply involved with the affiliation. Whatever it may be, this can leave a group of people torn between their personal desires and a doctrine. Friends of those that are LGBT are torn between something they’ve known all their lives and their friends and family members. It’s making us think, it’s making us talk. It looks like some people don’t like how the conversation is going. Given an overall drop in church attendance and members across many religions, it’s not surprising that they’re trying to keep this control.

Maybe I’m a whack job with a conspiracy theory, but it begs the question: if someone can control with whom and how you have sex don’t they have everything? If you deny yourself one of the purest, deepest feelings of love and emotion, you have lost a part of yourself. And if we give that up, why not change other things while we’re at it?

Perhaps the LGBT rights movement is a stand to shake off the last of the shackles that these teachings have had on us for millennia. Maybe if we take back our complete sexual freedom, we’ll start thinking about how good that pork chop is looking. Or that our Sunday best is a wee bit uncomfortable in the mornings. Is it a potential snowball effect? Is this why we’re experiencing the rife we have today? I’m not sure.

But that pork chop is looking pretty good right now.

Yes, that’s right. We want YOU to write something for SexIs! See this forum thread for details and this one for this month's topics!
Tags:
Views: 1556
Related articles