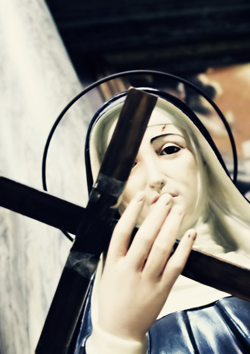 Any experience of submission or domination – if I were to play that way – are for pleasure’s sake, not to get the Church off, writes the author in an essay that challenges the power structure of sin, sex and spirituality.
Whether we are willing or comfortable admitting it, each of us as an automatic response system — the Machine if you will — that reacts sometimes knee jerkily to the topic of sex. Even those of us accustomed to exploring its mysteries — self-proclaimed sex-positives or simply the less inhibited — are products of our environment, pasts and unique sexual experiences that have left their indelible mark on our attitudes towards sexuality.

I look no further than my own life to illuminate this point. My European-born mother was comfortable with nudity and the biology of our bodies, so I learned by age seven how babies were made. Running naked through the house post-bath or sunbathing topless were opportunities to enjoy fresh air on clean skin sans shame. Mom explained more than just the mechanics of procreation to us – I remember asking her about oral sex and kissing for example — though she had serious attitudes about when making love was acceptable, and when it was not. Within the context of marriage and for the purpose of having children — acceptable. Anything else — not acceptable.

Dad was more modest, a product of his Catholic upbringing, so around him I learned to cover up, to stifle my curiosity and keep my thoughts to myself. The one time I dared talk to him about my changing body, he quickly told me that was a chat to have with mom. It wasn’t until he was in his eighties that my father even mentioned ‘privates’ in the presence of two of his adult children, and when it happened, both my sister and me dropped our jaws and giggled conspiratorially when he was out of earshot.

Your experiences might mirror mine to some degree, or be vastly different. The point is that our reactions to sex, the having of and the discussions thereof, are rooted in our culture at large, which still responds as if the distant Puritanical umbrella (if you are an American) needs to protect us from any stormy weather we might encounter in the messiness of libidinous urges. Our sensibilities are easily ruffled. Scarlet letters continue to imprint our collective psyche in the form of slut-shaming; substituting information about reproductive biology for real sex education; and the pervasive tendency to discuss sex in hushed whispers whenever we are in polite company.

One could even argue that the original sin was the invention of sexless spirituality.

In an essay on the topic, David Crawford writes, “in the early Christian era a ladder image of spirituality emerged. True virtue was associated with movement upward, away from the earth.” Crawford further states that, “bodily mortification and celibacy were elevated as particularly honorable. Even among married Christians, those who abstained completely from sex were deemed more virtuous than those who had intercourse with the intent to procreate.”

This resonated true for me based on the mixed messages I got growing up. A part of me has often felt less ‘meritorious’ for enjoying sex and believing it the ultimate form of shared affection. Over time, this dissonance has diminished, though it rears up when I’m willing to admit to myself that there are things I’d still like to do, and people I’d like to do them with, given half an ounce of a certain type of courage.

I also believe this split between the sacred and profane is one reason for the re-emergence of Goddess culture, the popularity of Tantra and schools of Sacred Sexuality, and other sensuous and body embracing worship modalities. Deep in our guts is an awareness that sex is the rare and ultimate human experience, and not just for pleasure, but for knowing the unknowable.

Orgasm and spirituality are twin pillars of transcendence. I am convinced that regardless of what dogma imposes upon our minds, the body knows differently. The body remembers at the cellular level what a millennium of perverting our natural urges has failed to eradicate: we are sensual, sexual, co-creative divine beings.

If modern religions aren’t going to validate that for us, and I’d argue that is largely happening from the perspective of many believers and non-believers who toss all religiosity aside, then lovers will turn to sources that encourage a healthy relationship between the mind’s consciousness and the body’s carnality. There’s only so much shaming a person can tolerate, only so many restrictions against what we know to be true to ourselves, before rebellion sets in. This happens at individual levels and in communities and is well documented so I won’t dig deeper on that point.

I’m more intrigued by something else. Maybe not all is hopeless for organized religions, and as Crawford writes, there’s another illuminating option: reinterpreting religious texts and what they say about human sexuality. He points out that sex for spirituality’s sake is, “more authentic to both Jewish and Christian heritages,” and looks to the Song of Songs to make this point.

The non-theologian in me prefers this joyful view to the austerity of conventional ones. My body responds viscerally to a higher truth that there is no split between the body and the spirit, and that if there was ever a sin perpetuated upon the whole of humankind, it was the one that said: what you yearn for is wrong, dirty or perverse.

We are now beginning to realize that “repressed sexuality and repressed human development does not bode well for the human divine relationship,” writes Crawford. “We are beginning to see that the bodily dimensions of feeling and emotion, longing and desire, are not foreign to but rather essential to a healthy spirituality.” Granted, it’s easier to own this when thinking about small sexual shifts and more unnerving when it comes to digging deeper into our private fantasies. That’s where the real exploring begins, and the stuff that must have inspired stories of vengeance, wrath and brimstone ala’ Hawthorne’s Hester Prynne.

“Flesh and desire are not inherently evil,” says Crawford, but the idea that what we do with our bodies lacks spirit, or that spirit requires us to forgo pleasure, might very well be. When God created sex, I believe she smiled. The divine within us lusts to experience life, and sometimes in that process, we behave shamelessly. How unsettling that must have been to those who continue to set dogma in motion. How unsettling it is that so many perpetuate the view that spirituality must remain chaste in order to be pure.

My journeys have helped me try on other points of view from those I learned in childhood. They have also helped me find purpose in desire to unsettle me in my wildest dreams. God/dess didn’t make us in a divine image only to have the devil slap on the genitals. Sexist dualism serves no purpose. We are created equally and with separate, whole and complete identities, and that means that what we do (between consenting adults) is in God’s image too. Fearing how this might destroy our souls allows ignorance to consume us, and perpetuates private hells. Giving up sex for the sake of spirit is the disembodiment of our power.

Alternatively, we have the option to maintain reverence for how sexuality in all its beautiful messiness brings us closer to knowing freedom and love. I finally get that. Any experience I have or will ever have is as it should be. Submission or domination – if I were to play that way – are for pleasure’s sake, not to get the Church off.
Tags:
Views: 1487
Related articles