Colonization of the Sacred Breast 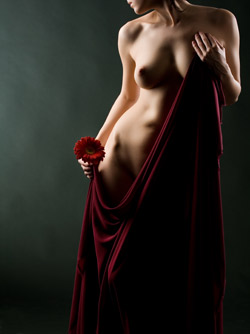 The powerful meanings breasts convey as life-givers and life-destroyers are varied and complex. There are the ‘good breasts’ that we associate with lactating mothers and the ‘bad breasts’ that kill us with cancer; in between we squeeze in the ‘naughty breasts’ of sexuality that, depending on perspective, can be bad, good or both.

"When poets speak of death, they call it the place ‘without breasts.’"

My breasts became powerful before I knew what to do with their influence, the fullness and fecundity of their development occurring at a time before artificial enhancement was the norm. I angst long before their arrival, much like many young girls of my generation, though the worry I had was less to do with breasts in general — would they be big? Little? Squished together or droopy like the women in national geographic? — and everything to do with the result of contracting chicken pox just before puberty.

My barely there bosom was doomed to be permanently marked before my future life had begun, or so I thought. I discovered with great relief that no one ever took notice of that tiny imperfection. They just noticed the size of my chest. The scars that would haunt me regarding my ladies were all on the inside.

We laugh at the adolescent nicknames given to them, and lovingly ask for forgiveness when we are neglectful in the proper care and kneading of mother nature’s orbs, but those giggles and jiggles underlie just how conflicted our relationship to breasts really are. Eroticized, pulverized, minimized, and maximized, what we do with our breasts and how we cherish them depend on who you think they belong to and what should we do with boobies once they are unleashed. Lost in the sometimes-perverse and perverted adoration of breast is the sense of their sacredness.

Women’s busts are colonized in every possible way, Max Dashu explained to me, when I entreated her to share her insights. “Use them to sell stuff, parade stereotypical images of them that encourage men to grab and jeer, and that's all legal. But try taking off your top, or uncovering a breast to feed a baby, and all hell breaks loose.”

That’s just one side of the disconnected narrative that depends on who’s looking, and where. When I gave birth to my first child, breastfeeding was torturous and impossible; though the nursing consultant didn’t seem to care, tweaking and pulling my nipple like it was made of latex, not flesh. Three weeks of pumping for hours a day, crying and completely comatose, I let go of that expectation and returned my breasts to their former condition; milk-less.

As they dried up, I tried to convince myself that a bosom to lay your head upon is a wonderful thing all on its own, a source of pleasure even if my breasts couldn’t nourish my baby. Deeper than that truth lay another; my wounds about breastfeeding added to the list of disappointments that I carried buried beneath my breastbone. I felt like a lactation failure. All this cleavage and nary a drop of milk. It would be years before I learned that the choice to NOT breastfeed, or the inability to properly suckle a newborn has a long historical precedence.

“The mandate to nurse and the mandate to titillate are competing claims that continue to shape women’s fate. Since the beginning of the Judeo-Christian era, churchmen and secular males, not to mention babies, have considered the breast their property, to be disposed of with or without women’s consent,” wrote Marilyn Yalom, in the seminal book, History of the Breast (1998).

According to her, maternal breastfeeding as a civic duty found modern support in seventeenth century Europe, though it waned significantly in the United States mid-nineteenth century, only to find popular support once again in the past decade or so. Back and forth we’ve traversed this paradigm, with women’s breast being bound up in the controversy, as if they are no longer attached to a viable being, a person with her own needs, wishes, wants and aspirations about the most luscious curves of her physique.

Moralized as teats, demands on women’s’ breasts to conform as objects of beauty have barraged us as well for a very long time. Flattened in the 1920s, propped up like torpedoes in the 1950s and plumped with implants today, breast control trumps modern attitudes towards the female form. What a relief and an awakening to learn that though the topic is still barely uncovered, much like the breasts from the 18th century masters who seemed to be more at peace with cleavage than today’s societal norms, others were on the task for revealing the hallowedness of the breast.

We can look deep into our ancestral past to find early evidence that the breast was often revered. From Neolithic cave drawings to sculpted forms discovered in the Americas, France, Africa and Asia, a common image emerges from myth-immersed communities. Oral traditions may be broken and we can no longer hear their stories directly, but the artifacts left behind are rich and round. Homage to the breast was widespread and practically universal.

“Several key themes of the iconic woman repeat on a global scale,” asserts Max Dashu of suppressedhistories.net in her blog, Icons of the Matrix. “These recurring [breasts] reflect the spiritual concerns and ritual life of the people who created them. They belong to animist consciousness and philosophies, rich in complex meanings underlain with myth and mystery, pulse and flow.”

Dashu and the few others bringing fuller clarity to our understanding of the historical and sometimes hysterical domination of women’s forms by society also point to the dichotomy with which each individual woman subconsciously views her breast.

“Women have been obliged to confront the powerful meanings breast convey as life-givers and life-destroyers,” Yalom explains. There are the ‘good breasts’ that we associate with lactating mothers — imagine Madonna with the infant Jesus at her bosom — and the ‘bad breasts’ that kill us with cancer; in between we squeeze in the ‘naughty breasts’ of sexuality that, depending on perspective, can be bad, good or both. Our experience, she correctly insists, vary significantly from how society relates to women’s breast.

“For women, the opposition between the ‘good’ breast and the ‘bad’ breast does not pit the mother or saint against the tramp and the whore, as in many male-authored texts. Nor does it evoke the opposition between the child’s perceptions of the ‘good’ nurturing breast and the ‘bad’ withholding breast that underlies certain psychoanalytic theories. For women, their breasts literally incarnate the existential tension between Eros and Thanatos — life and death — in a visible and palpable form.”

I’ve had many friends survive breast cancer already, two of them when they were still in their thirties. Without presupposing anything about their emotional suffering, it occurs to me that perhaps one reason why breast cancer frightens us so much is that it cuts to the core of our perceived power. For different reasons today than the past, for better or for worse, we identity with our breasts. They are us. Every women reading this carries private wounds and pleasures about them. Riddled with breast angst, it is no wonder we need collective healing.

That process began with me when my daughter was born. I was able to breastfeed my baby girl — only for a week or so — but still, we basked in milk coma together and as I gazed into the depth of her newborn eyes, gratitude replaced my sense of breast inadequacy. Talking to other women who had had a hard time as well, and even those who’d done it for months but admitted that they had hated it, taught me that every woman has issues with the form, function and shape of her breasts. We all struggle with owning their power, loving them fully, accepting ourselves as perfectly formed regardless of cultural demands heaved upon our chests.

Recently, I read a passage by Susun Weed that I wish had been shared with me long ago, before I grew into womanhood when my breasts were just buds of anticipation.

My children are fascinated with their mother’s bosom. They snuggle against me all the time, and when our hearts beat in unison together, I release tiny bits of what remains from that old wound. If I allow them, tiny hands will reach out to hold my breasts and little eyes will giggle and little lips will form an “O” in joy at being held close to the source of comfort and love. My daughter is constantly feeding her own babies in mock mother’s play, running around topless when we allow, and asks many questions. Her innocent curiosity tells me she is yet undaunted by any misguided expectations about the female breast. I intend to do my best to guide her into adulthood knowing her power more fully than I did at a tender age. The questions above will serve as my starting point.

I got these big beauties the old-fashioned way: I grew them. Today, my breasts sag like they never did, and I treat them to the most comfortable and pretty bras that I can afford. I give them oil massages now and again, and my husband showers them with affection and manly caresses. The outer scar is practically invisible to the naked eye, and my inner ones have faded too. Beyond all that, this much I know: My breasts are powerful, they bring pleasure and soulful sustenance to my family, and they are mine.
Tags:
Views: 2001
Related articles