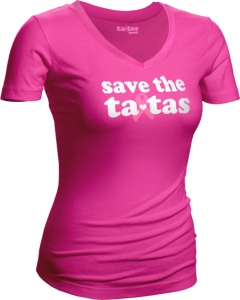 Fighting cancer – and saving beautiful ta-tas – one t-shirt at a time.
Susan and I have an admitted affinity for cleverly provocative and clearly funny t-shirts. Ask our friends and they’ll tell you about Susan’s cotton top with the image of two birds perched side by side on a branch and the word swallows printed in script underneath (get it?). Or the one I have that declares, “My life is a very complicated drinking game.” As our t-shirt collection has expanded, so has the number of fabulous reactions and wonderful conversations they’ve sparked.

One of the most meaningful of those happened some five years ago while Susan and I were tailgating before a Sheryl Crow concert. The twist, though, is that we weren’t the ones sporting the dialogue-inducing threads. Instead, a woman (who actually looked like a well-endowed Ms. Crow come to think of it) wearing cowgirl boots, a denim skirt, and a muted pink t-shirt with the slogan “save the ta-tas” sauntered past our little piece of the parking lot.

It caught our attention instantly. We called the woman over, offered her a drink, and asked about the catchy garment.

“When she walked up, I noticed the pink ribbon behind the word ta-tas,” says Susan. “I realized right then that it was a breast cancer shirt and got a little nervous. We had every intention to make a joke or say something borderline inappropriate about ta-tas, and then all of a sudden it’s actually a serious shirt promoting breast cancer awareness.”

Turns out we didn’t have anything to be worried about because the folks behind that brilliant slogan, the ta-tas® Brand – and by extension the majority of people who sport their attire – are all about dealing with the very serious issue of breast cancer with a smile.

“Laughter has many healing qualities,” says Julia Fikse, founder and president of the ta-tas Brand. It relaxes us, and studies show it can boost our immune system and protect our heart as well. Laughter can bring people together and give life to hope. Hope gives us the inner strength we need to act. Taking positive action is what changes the world for the better. So, while cancer itself is a serious problem, finding joy amidst the sadness is a great way to begin the healing process in our hearts and in the world.”

Still, if you’ve ever been mad, frustrated, furious, or just plain down in the dumps about the disease, don’t worry, Fikse’s been there, too. In fact, that’s where her journey to save the ta-tas began back in 2004. “My husband’s aunt found out she had breast cancer and was going to need a double mastectomy,” she says. “We were really sad one night, and in that dark place you go when you face cancer and possibly the death of someone you love.”

And that’s when Fikse had a Robert Frost moment and decided to take the road less traveled. Instead of giving that night’s grief an opportunity to turn into sorrow and maybe morph into depression, “we started to laugh about boobs!” she says. “That laughter helped me out of the sadness and into a mind frame to do something.”

That something was to launch the ta-tas Brand, a t-shirt line that generates funds to fight cancer, and, just as it did in the poem for Frost’s intrepid wanderer, Fikse’s decision to take an alternate path has made all the difference.

While roads less traveled can be a bit lonely at first, it didn’t take long before Fikse had plenty of company. “If you find a vintage ta-tas shirt, you’ll see it doesn’t even have a breast cancer ribbon on it,” she says, but “very early on something amazing happened. The breast cancer community got so excited about a fun line of shirts – it was a totally new concept back then – that they kept asking for a pink ribbon, then a bigger pink ribbon and a more flamboyant and fun focus on cancer.

“Putting ‘save the ta-tas’ in the line at that point just made a lot of sense. Once I did, it became the flagship slogan of the brand. Our fans and customers made ‘save the ta-tas’ what it is today, having gone from silent support to loud and proud.”

You can still get t-shirts and tank tops with the original, simple “save the ta-tas” mantra (it remains my favorite), but Fikse isn’t kidding around about there being some louder and prouder options, too. Other designs include eye-catching graphic tees and phrases such as “green saves trees, pink saves these,” “badass ta-tas,” “I’m a survivor,” and, of course, “laughter heals.” Men’s wear and various accessories also are available.

The wide range of possibilities is all part of the vision. “Ta-tas is unique because it validates everyone's experience with cancer,” Fikse explains. “No matter where we are on the cancer spectrum, from not having any experience to having experienced the worst, the message of appreciating women, saving ta-tas, saving lives, donating, and laughing is common ground. We can stand together to fight this and we can have joy within that journey.”

The fight, however, requires cash, which is why a portion of every sale at savethetatas.com – all year ’round and with no cap – is donated to the battle. The ta-tas Brand goal is simple, Fikse says, “To raise as much money as possible to fund independent cancer research so that we can end the death reign of cancer forever. Since our very first sale, every purchase has generated a donation to fight cancer.”

The money is crucial, and what Fikse and the ta-tas Brand have already generated is impressive, but just as important is the awareness component and how the company has affected the mind-set of the general public. Fikse says she’s been asked “countless times in a hushed voice, ‘can I laugh and talk about cancer in the same sentence?’ Of course! Today, it’s common to see humor in the fight against cancer, and I like to think we have been a big part of that attitude shift.”

I can say from experience that they have. After the shapely Sheryl Crow doppelganger arrived at our tailgate, she accepted a Jack and Coke and proceeded to tell us about her “save the ta-tas” shirt. I listened, and then raised my cup and said, “Well, I certainly hope we can save yours!”

“I was horrified,” Susan admits, “but she just started laughing. That’s what I love about the ta-tas stuff. Rydell and I wear the shirts and hats and it never fails that somebody says something to us. It might be, ‘I love your shirt,’ or they might actually ask more about it. Either way, it’s a fun conversation, not a downer. And if a few of those people buy their own, not only are they creating a donation, but they’re starting the whole process over in their circle of the world.”

Eventually, if we get enough of those circles going around, “we can beat cancer,” Fikse says, “with a smile, of course!”
Tags:
Views: 1689
Related articles