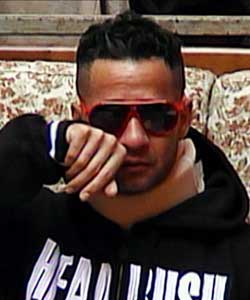 It’s been a week, which should have been more than enough time to sleep off the last episode of Jersey Shore, so we’re back for another run-down! While most of this week’s episode was dedicated to the Situation knocking himself silly on a concrete wall, there were still some non-head-trauma related sex and gender issues well worthy of discussion. If you haven’t already, make sure to check out last week’s list of the Top Five Most Fascinating things about Jersey Shore.

Ready? Then let’s do it, tough guy!

No. 5 – Just Because I Hate You After their 163rd fight this episode, Ron decided to be the bigger person by leaving the club without a girl and bringing Sammi home some flowers. His reasons for doing this? To show her A) that she’s the asshole and B) that he’s an adult. In our world, one would seem to cancel out the other, but apparently, within the proud tribes of the Northeastern Gorilla Juicehead, this is the accepted course of action, as it can be interpreted as a romantic gesture, a passive aggressive jab or a smokescreen to conceal a future attack.

No. 4 – Forgiveness…Sort of? As per usual, the Situation has heat with pretty much everyone in the house. Snooki, for instance, is for some reason ticked off that Mike told absolutely everyone that she cheated on her boyfriend with him. Putting aside the question of whether she actually did or not (she totally did, right?), the important thing is that it’s all over now…we guess. After a night out on the town with her girls, a totally sober Snooki let Mike know that she’s still mad at him for trying to ruin her relationship for the sake of a trashy reality television storyline, but really, she loves him as a friend. Adorable?

No. 3 – The Fabrication This week’s episode started with Mike frantically claiming “I don’t get involved in your relationship, Ron!” This, of course, is absolutely hilarious, as the Situation gets involved in not only Ron’s relationships, but the relationships of everyone in the cast, and we’re assuming the crew as well. In fact, we’re kind of shocked that he hasn’t called our loved ones with something he heard about us…that we know about.

No. 2 – Ready to (Kind of) Rumble All of this leads up to this episode’s main event: A mind-blowingly disappointing brawl between Mike and Ronnie. As pointed out by Pauly D. later in the episode, for two guys who perform masculinity at every available opportunity, Mike and Ronnie have no idea how to fight, flailing at one another and rolling around before some gigantic man showed up and separated them. Not that Pauly and Vinnie seemed any more macho, however, as they both made themselves scarce once fists started flying. Also, we couldn’t tell because of the bleep, but did Ronnie call Mike a “fucking faggot?" If so, is this really the first time we’ve heard someone use “faggot?" Kind of shocking, right?

No. 1 – No Phone Bone While talking to her boyfriend, the somewhat Italiany sounding Jionni, Snooki did her level best to initiate a round of phone sex. Unfortunately for Snooki as well as the television viewing public, Jionni was absolutely uninterested in the proposition. We find this extremely odd, however, because Jionni is the opposite of every other man on Earth (aside from The Situation), as he’s willing to have real sex with Snooki, but not phone sex.

Did you see anything we missed? Also, who wears sunglasses with a neck brace? Tell us all about it in the comments, and then make sure to watch Jersey Shore on MTV this Thursday at 10pm and check back with us next week for more nonsense!
Tags:
Views: 926
Related articles