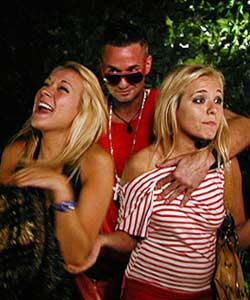 And we’re back! Another episode of Jersey Shore down and another slew of disgusting, creepy, psychotic and just plain fascinating things to talk about from a sex and gender perspective.
If you missed our first look at one of our favorite reality shows, make sure to check out last week’s article here.

Being that foreplay is an unheard of concept on the Jersey Shore, let’s slip on a pair of the Situation’s sweatpants and get right down to business, shall we?

No. 5 – Shameless Sitch’s Small Voice OK, so the big story this week was obviously the Situation spreading (maybe true) rumors about him hooking up with Snooki during the off-season. That’s definitely sleazy, but it’s nowhere near as fascinating as Sitch interrupting Snooki’s phone call to her father to try and call one of his fine, upstanding young lady friends while simultaneously putting the moves on Snooki. Our favorite part of the scene, however, was when Mike got through to his plan B and switched over to the most absurdly transparent gentle voice we’ve ever heard.

No. 4 – Deena’s Italian Conquest Deena wants to get laid by an Italian guy. A totally reasonable goal for someone getting paid to drink and party in Italy we think, and likely pretty easily achieved by someone with camera crews following them around constantly. So why does Deena need to be so aggressive with the poor Italian waiter she picks up at a restaurant? What’s worse, is that when she finally gets her “Lean Cuisine” home after a night full of in-club making out and Jersey Turnpiking, she screams at her roommates in a fight that’s probably largely unintelligible to Mr. Cuisine, before bullying him into staying the night and cuddling with her.

No. 3 – The Lesbionic Woman Apparently, Deena just wasn’t in the mood for Lean Cuisine though, as she later pulled a robbery on the Situation, stealing one of his two twins out from under him and making out hard with her at the club. Thankfully, Deena cleared up any misconceptions by mentioning (numerous times) that she totally loves the penis. Luckily for America, Deena wasn’t going to let that get in the way of her hooking up with Erica. What did the courting process sound like? Mostly Snooki telling both girls that she’d totally hook up with Erica if she was feeling “lesbionic.”

No. 2 – They All Look The Same It wasn’t just Deena who harbors a predisposition to dick though, as she couldn’t leave her partner in lesbionication alone for a moment without Erica sneaking over to Vinny’s bed, and proceeding to do something that required her pants coming off. Deena once again pulled a robbery to regain possession of her most recent conquest, but ultimately, in a magnanimous show of generosity, she sent the still pantsless Erica back to Vinny. Meanwhile, Erica’s sister Brittany was off somewhere waiting to hook up with the Situation. Which one of these girls was the virgin again?

No. 1 – All In The Family The strangest and ickiest thing to happen on Jersey Shore this week, however, was the Situation’s earnest attempt to have an incestual threesome with Erica and Brittany. We know that we shouldn’t judge others’ sexual proclivities, but we still draw the line at incest, right? Even when it’s consensual? Maybe that’s just us being provincial, however, because no one in the cast seemed to have a real problem with it, and Snooki even tried to help Mike out with an assist, eliciting tales of the self-proclaimed virgin twin watching the other one, in the words of the illustrious Deena, “make sex.” This was like that time Mike made out with a tranny in a club and it got maybe two minutes on the show. You’re burying the lead, MTV!

Finally, we’d be remiss if we didn’t mention that it’s official: Ron and Sammi are back together. We were hoping that we could just treat the whole thing like an infection from the Smoosh Room (i.e., ignore it and hope it goes away), but unfortunately, it looks like our generation’s greatest love story is back on. Who said romance was dead?

Did we miss anything? What were your favorite moments of this week’s Jersey Shore? Catch the show every Thursday at 10pm on MTV, or on one of its unavoidable reruns, then check back with us next Friday for another Top Five!
Tags:
Views: 1016
Related articles