Reviving the Runaways: Who Should Rule When Law, Psychology and Teenage Hormones Collide? 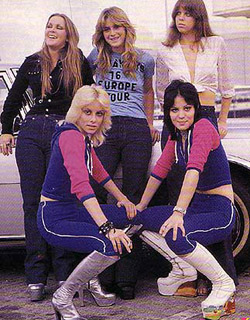 Mercury Records
As a child of the ’80s, I couldn’t escape “I Love Rock ’n’ Roll” on the radio, and I grew up loving Joan Jett’s leather rocker-chick look. I became a bigger fan when I read about her in Gillian G. Gaar’s fem-rock tome She’s A Rebel. From that book I learned that a teenage Joan Jett had been a member of an all-girl band, The Runaways.

In 2010, Kristen Stewart portrayed the young Joan Jett in the movie called The Runaways. When I saw it, I was pleasantly surprised by the opening scene: 15-year-old Cherie Currie (played by Dakota Fanning) started her first period. Luckily, her older sister Marie (Riley Keough) is nearby to tell her what to do. I like a movie that’s not afraid of a little blood. It’s an experience that unites nearly all women, yet we rarely see it on TV or in films.

Moments later, both sisters hop into a car with Marie’s much-older boyfriend. Soon Cherie is the lead singer of the Runaways, leaving her sister behind to tour with the band. None of the young women in the band are over 16, yet throughout the film, sex with older guys is on the menu. I had to wonder: Does this mean these young women knew what they wanted and weren’t afraid to explore their own sexuality, or that they were taken advantage of It’s a question that goes largely unexplored by the film.

During the movie, I began having flashbacks to my days as an intern at an outpatient mental health clinic. Part of that internship entailed sitting in on Female Adolescent Group, a peer-support and therapy session for girls ages 13 to 17. Several who were assigned to the group (some voluntarily, some by court order) were there for very specific behaviors. They smoked pot or used other drugs. They drank alcohol. They had sex. They got into fights—the same things the young female protagonists the Currie sisters and Joan Jett play out in The Runaways.

In the mental health world, all of these behaviors are considered symptoms. The human brain doesn’t grow into its adult form until the early twenties, and decision-making is one of the last areas to mature. Scientifically speaking, psychologists know teens can’t be trusted to make their own best decisions. Biology says so.

Normal sexual behavior for a teenager, according to the therapists I worked with, could include choosing to have safer sex—as long as there was no coercion. A young man or woman’s choice of sex partner makes a lot of difference, though. To be considered “normal,” by mental health professionals, sex has to be between two people with two years or less of age difference between them. It makes psychological sense: Sexual partners should be equal in terms of physical and emotional maturity so the older one isn’t taking advantage of the younger one.

Any sexual activity outside those guidelines, then, was child abuse. If a 14-year-old told the group she’d had sex with an 18-year-old guy, the group’s two therapists were legally bound to report it to Child Protective Services. Sometimes it seemed like the right move.

In Reviving Ophelia, psychologist Mary Pipher’s influential 1994 book on female adolescence, Pipher states that sexually active teenage girls get pregnant, get STDs, suffer rejection and/or bad reputations, and become cynical. She concludes, “Most early sexual activity in our culture tends to be harmful to girls.”

Yet some girls disagree. Some teens make other choices.

“Consent of a Woman”

In an interview that originally aired on National Public Radio’s Fresh Air on May 5, 2009, novelist Ayelet Waldman discussed talking with her children about sex, sharing her own story of losing her virginity. Her partner was an Israeli soldier in his twenties; Waldman was in her teens. She spoke of her experience with some regret, but not too much. She would tell her children, Waldman said, that you should love everyone you have sex with, though you’ll love some of them much more than others. It was a wise, practical, human statement.

Wise, practical, human statements all too often are at variance with penal codes. Several years ago, Kristin Rowe-Finkbeiner addressed the issue in an article titled “Consent of a Woman.” She traced statutory rape laws back to their origins in thirteenth-century England, at which time it was considered “a property crime.” An unmarried, virgin daughter was a financial asset, and to take a girl’s virginity without her father’s consent (and the exchange of a dowry) was considered a theft.

Couple the antiquated notion of sex as a property crime with a layer of American squeamishness around anything to do with sex, and you’ve got a recipe for legal nightmares. Oklahoma, for example, charged a 16-year-old young man as an adult on two counts of sexual abuse of a child in 2008. The state also made him register as a sex offender, a lifetime designation. His crime? Having sex with his 13-year-old girlfriend. The girl told him she was almost 16. There have also been so-called “sexting” cases, where teens have been charged with possessing child pornography after receiving nude cell phone pictures from other teens their own age. In these cases, the laws are harming the ones they’re designed to protect.

The Age of Innocence

Laws say one thing, and the mental health community says another. Even acts that might not get you arrested—consensual sex between two 16-year-olds, for example—could get you a standing weekly appointment with a therapist, or sent to the inpatient unit. It’s not a bad place, if you don’t mind being locked up in a place where staff dictate every aspect of your daily routine, from when to brush your teeth to the length of your (monitored) phone calls.

In The Runaways, Cherie Currie had a fabulously good time partying like an underage rock star. She also suffered consequences. Drug abuse nearly killed her. The movie didn’t portray the effects, good or bad, of having an older lover, though. It’s left up to the viewer to decide whether she was being exploited or expressing herself.

Sexual experiences can mean such a wide range of things to the people who have them. A single experience can seem pathological at one moment but seem transcendent with more hindsight, or vice versa. It’s hard to determine good or bad, harmful or healthy, sane or insane, when teenage sexuality shifts like the colors of a mood ring.
Tags:
Views: 1329
Related articles