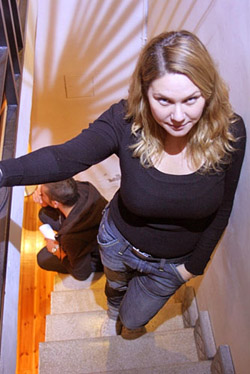 I recently became a mother, and when my daughter sees her first adult film, I want her to take away positive messages about sexuality. So, I don’t want Rocco Siffredi, Nacho Vidal, or Marc Dorcel to be the ones explaining the world of sex to her through their explicit films.

I like the approach of Violet Blue, Tristan Taormino, Candida Royalle, Jennifer Lyon-Bell, and Zoe Cassavetes. They are producing, directing, distributing, and promoting a new kind of adult cinema that is not offensive for women. There’s a revolution going on right now, and we need more female voices to make our new approach more visible.

Women are different from men. We have a different body and a different mind, so it’s pretty logical that our desires would be different. We are all individuals first, of course. But a big majority of women like similar stuff and share certain interests. Women should be able to enjoy adult films where we can listen to the female voice and focus on her pleasure. I don’t think that desire should be confined to a male vs. female dichotomy. Many men enjoy my films, and many men read feminine magazines—and they are more than welcome to.

There are several explicit photos, film stills, and illustrations in the book. Were you afraid some readers might find them offensive?