Merging the Madonna and the Whore 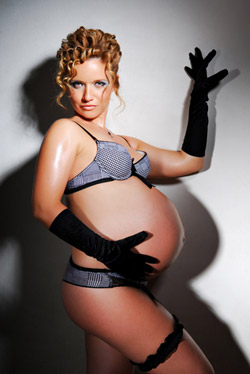 The day has come to start bridging the gap between being a mom and being a slut.
Amid all the exaggerated caricatures of female personas in pop culture, society still manages to put a substantial amount of pressure on women to fit into a prepackaged mold of what a lady is supposed to be (please pronounce that “lady” with your choice of antiquated accent).

If you’re not sure what the proper-lady mold looks like, take a few minutes to ask your friends or acquaintances. They’ll more than likely be more than happy to tell you that they’d never do that with their significant other or that your heels are too high and your blouse is too low or maybe just roll their eyes as a way of saying, “I can’t believe she [insert your own form of sexual self expression here].”

And when you add children to the equation and become a Mom, not only do you have to deal with all that initial good-girl pressure, but a brand new set of obstacles — physical, mental, and cultural — pop up to keep you from being the lady I’d Like to Fuck. (A swanky James Bond-ish accent will work for that one.)

Anyway, the point is, it’s tough to simply let your slut flag soar — especially if you’ve become a mother — without the pressure and judgment of friends, family, of society itself.

If you don’t believe me, just ask Madonna — or at least take a look at her career arc. “She got famous with the bustier and bright red lipstick, right?” says Veronica Monet, ACS, CAM, fellow SexIs contributor, and certified sexologist. “But do you remember when Madonna got pregnant with her first child? She converted to pastel colors, necklines that went all the way up to her throat, and curly little blond locks that gave her this appearance of being sweet and innocent.

“So if even a rebellious woman like that can succumb to the whole ‘if I’m going to be a good mother, I can’t be a sexual person’ pressure, how can we expect regular moms to stand up to it.”

The first step is time, both in terms of figuring out how to fit sex into the new chaotic schedule and waiting for the new mom to feel like fitting it in again. Thirty-five-year-old Sandy, who is married and has three children, remembers that “immediately after each kid, not only was there not much time, but there was not a whole lot of desire either. Part of it was hormonal, a shift in body image and acceptance. But it was always really strange, too, for me when lactation interrupted sex. It wasn’t much of a turn on when I would squirt my husband with milk.

“Once I stopped nursing, though, and my body started to resemble what it used to look like, our sex life picked up again.”

Finally, some alone time in paradise never hurts the freaky factor. “We took a week-long trip to Hawaii by ourselves,” Sandy adds. “Getting away from the kids was magical in so many ways, and our sexual experiences there were better than so many others we have had through the years.”

More Than A Mom

Some physical separation from the little ones is absolutely crucial, but lowering a mental drawbridge in order to easily flit about from mom duties to fulfilling your own desires is just as important. Daphne, a 37-year-old married mother of one, spent some time figuring out what kind of person she wanted to be and what sort of relationship she wanted to have with her husband after she added the title “mom” to her repertoire.

In the end, she decided that her “worst fear was to be only a mom. There is so much more to be, and being a sexy wife is one of them!”

That may sound like an easy conclusion to come to, but Monet emphasizes the need for couples to communicate about this point. “This is something we need to give women — moms — freedom around,” she says. “Husbands, or the men in their life, need to be very sensitive to this and tell her that she is a great mother and a really hot, sexy, raunchy lover.”

There is a fissure — perhaps a full-blown crevasse — between these two identities in our society, but Monet believes that “if men can put those two ideas together, can praise them both, he can help his partner bridge that gap.”

So far, Daphne isn’t just building a bridge, she’s filling in the entire ravine. She remembers a specific moment during sex when she realized how proud she was of herself for transforming into the entire package: “I thought, ‘good on me! I’m a mom and risqué.’

“I actually think that I’ve become more adventurous since having a kid. I was inspired by Susan’s lingerie session Victoria Has Given Up Her Secret and ended up doing a photo shoot myself. And, I’ve invested in matching cheerleader and football outfits to fulfill my husband’s favorite high school fantasy!”

Daphne is on the right track, but the bottom line remains, “Women don’t have a role model who is a sexually empowered woman and a mother,” says Monet.

I offer Angelina Jolie. She’s a well-documented mom and has continued to take on a number of sexy, ass-kicking roles. In fact, she played one of her sexiest characters in Mr. & Mrs. Smith after adopting her first child, and has continued with other tantalizing femme fatales in Wanted and Salt since giving birth.

“Yeah, she has that ‘I am what I am and I’ll be what I’ll be, think what you want’ attitude,” says 41-year-old Aimee, a married mother of two.

And if you don’t want to look up to Angelina Jolie — and can’t decide on your own sex positive mommy role model — you could do a lot worse than taking some hints from Aimee. “Look,” she says, “kids are great, but they do usurp many of the freedoms we take for granted during our time as non-breeders. There was no way they were taking my sex life, too! I like sex. Becoming a mom didn’t change that. The only thing different about how I approach sex now is that I can’t simply do it on the couch in the middle of the afternoon because there are small people around.

“Sexually speaking, I am very much the same person I was before. Maybe ‘worse.’ I actually ended up breaking protocol against doctor’s orders near the end of the post-partum designated waiting period. Slut!”

And there we have it, whether breaking medical protocol or standing up against societal pressure, embracing one’s inner slut is a crucial step to becoming both “free and whole,” as Monet says.

And taking this important step is possible even after those small people enter your life. I tell anybody who will listen that Susan and I got way cooler after we had kids, when we realized how important it was to constantly work on our marriage to make it as rewarding as possible, because ultimately, that’s how we’re better parents.
Tags:
Views: 1438
Related articles