Mr. Sexsmith Goes To SXSW and Takes a Lover 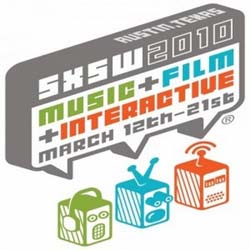 My other girlfriend greeted me with a chill when I arrived home from my weekend tryst with a new lover. I crashed at her house for the last three days, ate out in restaurants with her shamelessly, strolled with her in parks, stepped off the trails to make love (the dirty way) in the trees.

In Austin, spring has already arrived. The grackles were constantly chattering and present, and the Redbuds and Mountain Laurels were already blooming. It was sixty-five degrees and sunny with a slight cool breeze; back in New York, it is drizzly and damp and forty degrees. Walking the seven blocks from the subway to my apartment in the light rain was like cool water splashed in my face.

I traveled to Austin with Kristen for that big conference everyone is talking about right now: SXSW. The one that has exploded in recent years and that, if you aren't a new media, film, or music person, you probably don't care about at all. The conference was an excuse, and, I hoped, good networking and self-promotion, but the real reason was to go visit her. My friends have been trying to hook us up for years, trying to get me to go visit her because they knew we'd hit it off. I'd always wanted a chance to be in her bed.

Though this conference is well-known to be young and hip, apparently including queer content is relatively new. Trish Bendix, editor of AfterEllen.com and the producer of the panel for which I took part, called Engaging the Queer Community, said that though this panel was picked in the first round of announcements, she didn't expect that. Along with myself, Bil Browning from The Bilerico Project, and Fausto Fernos from Feast of Fun, we started planning a queer meet-up at Oil Can Harry's, the oldest gay bar in Austin, discussing our projects, and talking about the upcoming panel. I didn't realize until Bil posted on Bilerco that, though “[t]ens of thousands of people attend each year ... they’ve never had a session that was explicitly queer.” I had no idea! Perhaps they think they are post-gay? So young and hip that categories don't matter? Or perhaps more accurately, is the tech industry still hegemonic in its normalizing of white-straight-men?

Fausto and his partner Mark interviewed us Bil, Trish, and I for their podcast, Feast of Fun, before the conference, and sitting down at the table in the Green Room beforehand felt like seeing old friends. We had a great time chit-chatting about queer media online and taking questions from the audience. I believe it was videotaped, and hopefully will be available online soon.

The “Interactive” part of the conference, the panels and workshops part, which includes mostly new media folks talking about themselves (hey, myself included), I heard was larger this year than it's ever been before. There were dozens of names I was familiar with in the program. I caught a glance of Violet Blue and her sock garters and swooned a little bit, I'll be honest. She asked about visibility as a bi femme in the tech industry, a question for which our panel did not really have a good answer, and one of those ongoing complex questions that perhaps will never have an answer. I mean as long as there have been femmes, they have been mistaken for straight girls. This isn't new. How to fix it? I don't know. Until cultural norm shifts and we as a culture stop assuming that femininity equals straight, we will have problems with visibility.

I talked a lot about gender with the friends I visited, who opened their lovely little home and made me so envious of having a porch and a walkway and a yard with actual grass growing in it, and with the folks who came out to the meet-up at Oil Can Harry's. Seems like Texans have a lot of tradition they must struggle against, with both family, gender, and sexuality expectations, and many of the queers I talked to while there had struggled deeply with these concepts. I would love to see this conference taking on more queer issues, attempting to deepen discourse around the conversations that have been going on for years.

But I didn't spend much time at the conference. There was so much to explore.

You know how when you're with a new lover: it's so easy to stay up late, exploring and playing, and then to sleep lightly, so thrilling as it is to be next to their skin, feeling the electricity between your bodies, even if you're slumbering, and wake at first light, wide awake, without even looking at the clock but knowing it must be time, you just cannot resist putting your hands on their body again. And so your casual haphazard explorations of more of their curves and fingertips and that little dip in their hipbone becomes sweet whispers of "oh darling wake up, wake up so we can do this some more" and "please?" and "I can't wait any longer for your tongue back in my mouth" and soon enough, you're fucking again.

That's how it was in the mornings, waking in our host's lovely little house, hearing birds outside, knowing it was already warm and breezy enough to take the coffee cup out onto the porch. The city called for exploration. Kristen and I visited Zilker Park and the Zilker Botanical Gardens, we climbed to the top of Mount Bonnell, which had a lovely view of the city and of Lake Travis, then drove further out to walk along a path on Lake Travis in Hippie Hollow, a clothing-optional park. We visited Book People and Book Woman, two lovely indie bookstores, the former being the recipient of many "Best Bookstore In The Country" type of awards and in which a bookworm like myself could easily lose a few hours, the latter being a cute and smallish feminist womyn-with-a-y bookstore which would fill your witty bumper sticker or rainbow decal needs. And we ate—oh did we eat. Eastside Cafe, El Sol y La Luna, Gueros, Manuel's. I suspected I would get tired of the Mexican food, of vegetarian enchiladas, but I did not. I could eat it much more often than I do. I discovered Mexican martinis and micheladas and I already miss sitting in a garden, listening to live music, sipping away as the sun goes down and the garden lights come on. I sat in the sun next to Lady Bird Lake and read a book. We rented a car and zoom zoomed around, navigating by the light of the iPhones and the sounds of KUT.

That's not to say that I didn't think of New York City, my other lover. Oh, I thought of her. You can remake yourself endlessly in New York City, writing and walking and working your way to a new identity every month, if you wanted to. There are endless communities to explore and endless tiny subcultural circles inside of which you can immerse yourself. It is a city diamond-hard, something solid and strong enough to forge yourself against, out of which to carve yourself anew and beautiful. I wonder if Austin is like that. I wonder if being with her would feel as invigorating, as deeply challenging, as complex and rewarding as the bridges and tunnels which criss-cross the East River and connect these islands—Manhattan, Long, Hart—to the mainland. I doubt I could handle her heat waves in the summer. I know her dozens of flowering trees, her Redbuds and Laurels, would ignite my allergies constantly.

But as I stepped onto the open air platform of the second of three trains that I needed to take home from the airport at one in the morning, drizzle slapping me like a cold shock of water, I felt the sting of guilt for loving another, if only for a weekend.
Tags:
Views: 1209
Related articles