Mr. Sexsmith's Other Girlfriend: New York City Loves Me Back 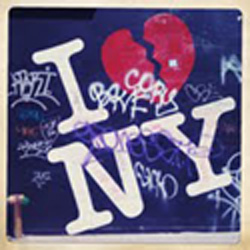 Sinclair Sexsmith
I’m not leaving New York City. At least, not yet. When I started this column a year ago, I’m not sure I would have expected to be renewed in my ability to withstand the extremity of this urban jungle, but I feel better equipped to deal with the daily trials and tribulations than I have in the past.
Despite my increased travel and more and more frequent visits to the West (best) coast, despite making less money this past year than I have in the five years prior, despite my apartment rent increasing again this year, despite the current (beautiful) spring meaning that the (unbearable) summer is just around the corner, despite the ever-present dangers of the economy ... I almost like it here. I am learning to like it here. I just might like it here.

I can’t imagine a better place to come in my late twenties, to throw myself into my self-made graduate studies, to casually toss myself into the fires of my Saturn Return, to break my own heart, to get reconnected to my callings, to begin to forge my own path through the ever-evolving box of tools I am gathering as I learn not just to #stayalive, but to thrive.

There are always moments when I don’t know if I can stand it anymore, when I worry that the vice grip of this demanding tense cement roller-coaster of a place will crush me. Those moments happen weekly, if not sometimes daily. Lately, I’ve spent a good amount of time in one of New York City’s finest hospitals, and wonder if better care would happen in cities that aren’t so rushed, stressed, focused on outcomes, and short on space. What if she had her own room? What if her doctors weren’t seeing twenty, fifty, a hundred other patients today, in addition to her? Perhaps it wouldn’t make a difference.

But perhaps it would.

And that’s what still gets me, daily, when navigating this city: that I have compromised my quality of life.

I remember a friend of mine in Seattle who is from New York City who attempted to move back here for a year or so, but returned to Seattle, saying that he jut wasn’t willing to live that way, with that much hustle, with that much compromise, in that crappy of an apartment. Sure, he said. I’ve got contacts. I could get a job. I could do something out there. But it doesn’t compare with what I could have here.

I think of that often, and I also think often that perhaps I have made something of myself here that I could not have there. Perhaps I didn’t have a great view of a body of water or my own parking garage or enough disposable income to invest in the hobbies that I love, but I found myself — no, I created myself. I carved myself out of and against the granite foundation of Manhattan, the dozens of neighborhoods of Brooklyn, the beaches of Queens, the expressways in the Bronx, the water surrounding Staten Island.

I got knocked around as New York City asked, “Who do you want to be?” I had to know for myself, had to be strong enough to withstand the taunting and the trials as I forged ahead. New York City asked who I was, and blew me over easily when I didn’t answer.

And so, I investigated.

I investigated myself. I looked into my own shell and asked what it was I would like to fill it with. I foraged; I fought for the bounty I sought. I created and re-created myself until I found someone I could begin to start living with for the rest of my life.

And I have New York City to thank for that.

It is basically impossible to say what I would have found if I hadn’t come here. Would I have found myself? Would I have stepped into my kink identity; to stand this firmly inside a dapper, chivalrous butch identity; to discover my inner top, my inner Daddy, to play with my desire for control and domination; to celebrate femmes as the loves of my life, as the way my particular orientation runs; to examine gender with such a critical eye, to begin to unravel the sexism that permeates so many layers of genderqueer struggles? I’d like to think I would have found these things on my own, regardless of my geographic location. My roots in all of those go way back, and I believe I would have come to them all eventually.

But New York City doesn’t do anything half-assed, and does everything in the biggest, boldest, extreme neon colors it can find, so I learned quickly here—I had to. New York comes at the weak link and picks at it, pokes at the open wounds, forces you to suture them shut. To survive in a place this raw and intense, one must adapt.

This relationship is far from over. I won’t stop writing about my struggles in this city, probably for as long as I live here, possibly even with some post-relationship processing after we break up and while I settle down somewhere new. I have plenty more to say about what it’s like to live here, what it’s like to be butch here, what it’s like to watch men’s fashion in this city where it is acceptable to wear a tuxedo walking down the street if you wish. I don’t know how this will end, though inevitably I feel it will. I’m a west coast kind of guy, a western American—I miss the wide open spaces and the trees and the way the sun sets over the water instead of the New Jersey skyline. I feel the call of the Pacific; those are my people, my tribe. But I have learned in my (almost) six years here in the east that my people are not confined to location: the transplants from the west and south are some of my favorite folks, and the Northeasterners are wild and spunky in their own lovely, fascinating ways.

There is always some way to find common ground and elevate the discussion. There is always a place to go swing dancing, or go camping, or visit a winery or a distillery. There are always people around doing radical, queer, beautiful things, performances and activism and art, in loving relationships with friends and partners and communities, doing as much of their part as they can to change the world for all of us, for the better. And those are my people, wherever I go.

I love the world in which I am immersed here, and I’m not ready to leave. Not yet, anyway. The west beckons, but New York City and I are still wrapped in a lover’s embrace, gazing into each other, supporting each other. I guess now I can really say that I think she loves me back.
Tags:
Views: 1308
Related articles