Mr. Sexsmith’s Other Girlfriend: Making Up With New York 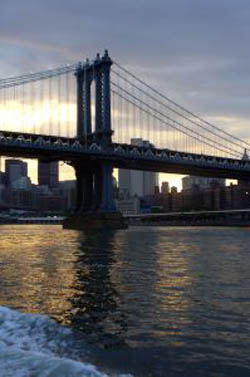 I sat on my roof tonight, looking over the downtown skyline of Manhattan, Lady Liberty, downtown Brooklyn, the dark patches that are Prospect Park and Greenwood Cemetery, even the far-off in-progress skyline of Queens. I watched the planes come in on the flight path to La Guardia, an organization I hadn’t noticed until my friend pointed it out to me on one of her visits, crashing on my used-to-be-comfortable-but-not-so-much-anymore futon, where I frequently sleep guests.

New York City and I have been fighting since I returned from Seattle. It seems I always have a hard time re-integrating to this city. I always bristle against it, like I am fighting against the thorns of a bramble bush, when if instead, I just turned the same direction as they aim, I would be free. But I can’t seem to remember to let go, to let New York catch me up in its clutches. Too often it seems New York embodies exactly that which I despise about American culture: greed, acting without thinking, excess, waste, gluttony, hierarchy.

How—and for whom—does this city become a garbage can?

I would blame the concrete jungle, the lack of dirt or things that grow, but really people litter in a forest and park, too. Still, I think the lack of connection to the pristine nature of the wilderness leads to not considering what happens when one dumps a wrapper out of their car window.

In Seattle, the garbage cans included signs: “This can is deposited in a landfill. Please reduce, reuse, recycle.”

Of course not everyone feels this way about my first love. My friend Ingrid of the lovely band Coyote Grace wrote this last week: “Oh Seattle... You are such the ‘ex’ that I can’t believe ever had me starry-eyed and spread-eagled. Not a fucking chance now... That was SOOO 4 years ago.” Wait, she found somewhere better than Seattle? I’m pretty sure she had the opposite trajectory from me, however—while I upgraded to a larger city, more people, more expensive, she downgraded to somewhere smaller, more remote, more solitary.

Maybe that would work better for me. Maybe it’s time to move to that cabin on a mountaintop, only accessible by hot air balloon that I’ve been threatening for years. Maybe it’s time to get out of this city, this place that inherently cannot support the demand, the influx of commuters and a population that doubles daily such that though there is a spot on the shelf for my favorite shampoo at the three drugstores around Union Square, daily those spaces are depleted, even if they were replenished last night. The shelves are never neatly straightened, never fully stocked, always being restocked, even if it’s in the middle of the day those big bins will be in the aisles, unlike other cities which get done overnight, silently, quietly, unseen, and shelves actually stay stocked.

I’ll be honest, I probably don’t need my favorite kind of shampoo. Another kind would do. But when there are so many options, how can I not make a choice? How can I not have a preference? It is so easy to choose poorly, so easy to make a bad choice. Maybe this is the plague of cities: to remind us of that constant comparison, that someone else has a better job, apartment, girlfriend, boyfriend, lover, shirt, gadget, and that you need to get yourself one if you ever want to keep up. That, if you make the wrong choice, that was a choice you made, so you’re going to have to live with yourself. That you make your own bed, you build your own neighborhood, you make your own dinner. Big cities make it possible to have excessive preference, to be picky not only about cupcakes over muffins and red velvet cupcakes over chocolate cupcakes, but about which bakery serves the best cupcakes, which bakery serves the most perfect red velvet icing.

I think those excessive preferences are necessary. Otherwise, there are just too damn many cupcakes.

No matter how much New York and I fight, don’t get me wrong—I do like big, swirling cities; I do like lovers who push me with more than I can handle, all the while saying, “I know you can handle this. Be bigger than yourself, be more, explode, be bold.” I do like to be shaken out of my comfort zone and pushed into being somewhere, someone new. I do like to be held by the constant creation of chaos and art and activism around me, ever-present and always growing, moving, changing. It feels like a living, breathing entity. But as such, sometimes we disagree. Sometimes we fight. Sometimes I sleep on the couch for a week.

Tonight, I’m back in the bed. I made a nice dinner, said some nice things, noted the appropriate details with love and care. I attended some amazing events this past week that could have only been in New York, they buzzed with that New Yorker I’m-gonna-get-shit-done energy, swirled with open ears and open hearts.

And tonight, you can see stars from my rooftop in Brooklyn. Tonight, I looked out over the Brooklyn-Queens Expressway, the shipyards, the Gawanus Canal, and seeing everything from a little higher up took me out of the chaos, just for a minute. I heard the silence behind the car horns and constant hum of the freeway, I saw the neatly organized grid of the streets, I watched the traffic lights change and direct the cars in lazy, rhythmic patterns, and for just a minute, for just long enough, the city made sense, and I remembered why I came here.
Tags:
Views: 982
Related articles