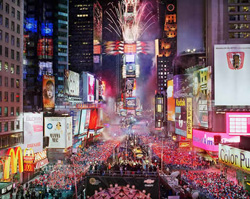 Countdown Entertainment LLC
The best ways to ring in the new year in the Big Apple.
For a politically and socially sex-fueled year like this one was, it’s time to honor 2010, and decide on some New Year’s Eve plans. While some claim that the evening has become more of an amateur night and prefer to stay home with a lover, there are still thousands and thousands of people who flock to New York City each year to either join the masses and watch the ball drop, or discover some of the city’s more scandalous, lesser known parties.

The year of 2010 brought us the decision that Proposition 8 is unconstitutional, and the first steps were made in repealing Don’t Ask Don’t Tell. Though there are a lot of logistics that need to be handled before these become the norm, the proper strides were made, so we can all be happy for that.

Mistresses were the center of attention this year with the unraveling of Tiger Woods’ ladies, John Edwards mistress and baby’s mama Rielle Hunter speaking out about their affair on Oprah, and Michelle “Bombshell” McGee breaking up the marriage of Sandra Bullock shortly after the actress thanked husband Jesse James in her Oscar-winning speech.

But in the world of celebrity breakups and makeups, Prince William and his wife and princess-to-be Kate Middleton trumped them all by getting engaged and giving romantics a promising look ahead to a wedding that is hopefully one made out of love and a true partnership.

So whether snuggled up with a lover, out in Times Square huddled with a stranger, or at an underground kink party—just promise us that you will ring in 2011 with a bang.

Get the feeling of Amsterdam in New York at The Masked Ball: Amsterdam Red Light District party where clothing is always optional. To prevent the creepers from spying without complying, the location is kept secret, so email danielnardicio@gmail.com who can let you know where the go-go boys, Champagne fountains, and queer fun will be happening.

If you are new to the world of swinging, your best bet is the Behind Closed Doors New Year’s Eve party where you have the option of watching, or playing—and playing is certainly your best bet. Just think–pools, poles, dancing and group play out in the open or in private rooms. There is also an open bar for a low price.
Tags:
Views: 1042
Related articles