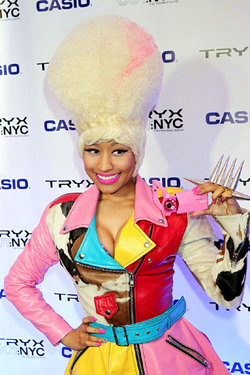 WireImage/Mazur
Nicki Minaj has found a way to push forth a strong feminist agenda, while dressing like a doll that many say encourages women to think that the skinny, plastic, large breast look is what we should all strive for to get male attention.
When Minaj released her Pink Friday album in November 2010, no one was too shocked that she appeared as a Barbie doll on the cover. The singer loves to dress in outfits that have no continuity, show off her different personalities, and embrace her girly side.

The Trinidadian-born, Queens-raised, 27-year-old was in New York on Thursday night for Casio’s TRYX-OUT event, which promoted its newest consumer camera. Minaj pulled up to the event in a double-decker pink bus causing a huge stir in Times Square. She follows in the footsteps of aggressive controversial rapper Kanye West, and reckless party-girl Ke$ha, who have represented the company for the past two years.

While she sings about sexual topics, she doesn’t play a damsel in distress or a girl waiting for her “Ken” doll to come along. She simply enjoys her girly side, while remaining sex-positive and extremely independent.

"I just embrace all people of all lifestyles and I don’t tell them they are bad people. And I say girls are beautiful and girls are sexy and they need to be told that, and if they don’t have anyone to tell them that and mean it, I’m gonna tell them that,” she recently told VIBE.


She’s as eccentric as they come — artistic, raw, open-minded, and feminine — but her personal sexuality remains a mystery. She sings about sexual encounters with both men and women, yet claims to be currently dating neither. To say she doesn’t want to be put under any labels is an understatement — even thought she was named the “New Queen of Hip Hop” by Rolling Stone. She continues to say that she can’t be put into a category because she has so many personalities, which include an uppity British woman and a gay man named “Roman Zolanski.”

Minaj proved on stage that she just doesn’t take herself that seriously. She makes fun of herself, her music and the world she lives in. Bringing her “Barbz” and “Kenz” entourage on stage with her, Nicki was also joined by about a dozen woman who had recently won a look-alike contest that got them tickets to the show. The most ridiculous outfit seemed like an automatic win. Her audience loves and admires her for not speaking poorly about anyone and being casual about her opinions. She’s just like that casual, fun friend who you always want to be around, and causes no drama. Judging by the fans that lined up in New York just to see her, she will be around for a long time.
Tags:
Views: 1293