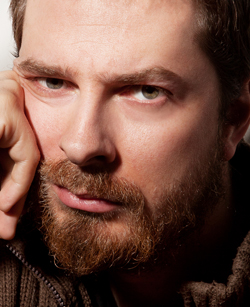 Studies about how the nose weighs in on mating also have the potential to uncover the workings of some of our most primitive mating behaviors. Which can go a long way in explaining how we sometimes we find ourselves in the strange predicament of being aroused by a “Beast”.
Olfaction is one of the oldest biological functions; we were smelling one another long before we used language to woo and copulate, and humans still rely on this scent-uality even when we are unaware of it. If it’s the one we love, there’s a whole lot of stink we can soak up; of course, most of us like our mates smelling clean and inviting and how he smells can do a lot to frisk up our moods for more than a good sniff.

Studies about how the nose weighs in on mating also have the potential to uncover the workings of some of our most primitive mating behaviors. Which can go a long way in explaining how we sometimes we find ourselves in the strange predicament of being aroused by a “Beast”.

First, a bit about what the Nose Knows

Researchers at Duke University determined that males relate differently to females both socially and sexually depending on whether the females in question were given hormonal contraception. Disclaimer: this study was done in ring-tailed lemurs.

In an analyses of hormones, genes, scent chemicals and behavior, it was found that “contraception alters the chemical cues these scent-reliant animals use to determine genetic fitness, relatedness and individuality. And, as a sort of double whammy to birth-control efforts, male lemurs were shown to be less interested in females that were treated with contraceptives,” reported Science Daily last year.

“Hormonal contraception is known to alter the attractiveness of scent cues in humans and the presence of fertility cues in other primates. We wanted to understand all the ways in which contraception changes scent cues and the subsequent way these animals might interact with each other,” explained Dr. Christine Drea, an evolutionary anthropology professor at Duke.

My inner science geek wonders if there’s even more to this story than sniffing hormones. Does this explain why some people are attracted to men with larger than average uh, er, snouts? Maybe men with patrician beaks are better equipped to ferret out the most fertile and genetically viable. Bear with me on this for a second.

What about those other strange (or not so strange) ways that we determine “attractability?” Desire is subjective. Still, some things tickle most people’s sensual bone: good skin and hair, symmetrical face and body, and specific waist-to-hip ratios (depending on gender). Men more often report that they like features associated with a baby face – small button nose, large eyes, and a rounded chin. Women on the other hand seldom go for the ‘cute’ look. We like square jaws, wide brows, and yes, features that signal maturity, strength and dominance – say a prominent, dignified nose.
At the end of the day, we may not be able to explain chemistry, what turns us on or off, or why we picked a particular mate over another. The forces that move us toward one another are varied and nuanced. They also don’t always seem rational which suggests they make “sense.”

Take attraction to “Beasts.” This isn’t just the stuff of fairly tales. We’ve all come across a relationship between partners when one is “Beastly.” Think Bella’s Brute or Charlotte’s Harry; sensual lovers beneath their somewhat unconventional exteriors, or bad boys beyond redemption that spawn imaginations. When this happened to me, I was totally surprised how my radar of lust started bleeping off the screen.

It was during a business trip. I joined some co-workers at dinner and we went to a local Italian joint where the owner-chef visited diners. Stout and jocular, he was decades older than me. A sensuous mouth suggested he’d been decent looking as a lad in his native Italy, but by the time we made eye contact, years as gourmand were stacked around his waist. His apron was smeared, his face stubbly, his fingers stubby Italian sausages and his eyes bulged. He smelled of garlic and fresh herbs and man-sweat.

He was a Beast, and there’s no explaining why I was tempted by his Chianti laced whispers. Because when he stopped at our table, he only looked at me, and he came back several times during the meal with his own version of Beastly questions.
Was I satisfied? Was there anything else he could offer? Would I be staying for more?

Innuendos stacked thicker than his accent. He was a master at the game. This wasn’t flirting, this was Aural sex. Clothes were kept on but somehow sexual energy exchanged, and I was totally turned on and disgusted. When we left, I felt oddly like the sexiest woman on the block, wooed by a funny looking creature with an oregano tongue, and I wanted to go back to the hotel and take a steamy shower.
That’s the power of attraction to the Beast.

Who knows exactly how pheromones amplify our verbal trysts. Appearance can be irrelevant at times, and Beasts can be masters of Aural love. The back alleys of attraction are mysterious, often unexplainable and integral to lust, desire and arousal. As a friend was once said: find someone who can weave a sensual tale in your ear, and you’ll have two people dry-humping in their minds. If the Beast smells good, chances are more than minds will be making love.

Yes, that’s right. We want YOU to write something for SexIs! See this post for details!
Tags:
Views: 1607
Related articles