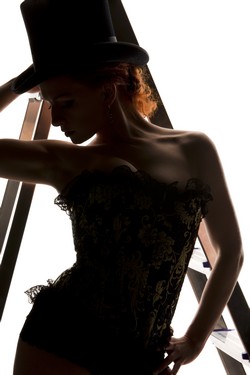 I got this email from a potential client today:

“Do you have lingerie and stuff you could make me wear? butt plugs are good. Forced oral and humiliation is great. Don’t really need the whips and chains. clothespins work well...what ever you want to improvise with.”

So now I need to go buy clothespins. Why do they even bother calling them clothespins anymore? No one around here uses them for that, it’s so outdated. They should call them genital clamps or something. Sheesh.

And now I’m thinking about what kitchen utensils I have that might be put to good use with a sub slave … Hot dog tongs? Egg beater? Cheese grater? Too bad I don’t have one of those mallets for tenderizing meat….

I set up a spontaneous lunch appointment. The guy was white-trash sexy—tan, young, aggressive, rough around the edges, smelled like smoke, called me “Baby.”

He had a tattoo on each bicep. On one shoulder, he had Jesus, on the other, the devil. He pulled off his shirt and had on a gold crucifix. LORD.

He manhandled me, my clothes came off. He was so excited. His cock was really masculine, a pleasure to play with. I had to force myself not to gobble it, to tease him slowly. Finally, I gave him a good sucking and he exploded.

He promised to come back again when he had time for a “good fuckin’, Baby!”

As he got dressed he said loud and laughing, “Y’know when I went to the cash machine, I pulled out 500 just in case you were the feds and I had to post bail!”

But thankfully neither of us was out to cause trouble, so he gave me $300 and had spending money leftover for the weekend. The whole thing lasted 20 minutes.

A guy emailed me asking for my availability and I told him I had lunch and dinner plans, but could see him in the afternoon. He wrote back, “I had no idea you saw so many men in one day. I’m no longer interested.”

Ooh, for some reason I took offense—even though I HAVE been with three clients in a day. Well shit, if they would just learn to play by my rules and let me book five sessions spaced out over a week and quit canceling and calling at the last minute and leaving me hanging... Grrr.

I couldn’t help but write back that my lunch and dinner plans involved eating FOOD not MEN, thank you very much. I mean Jesus, who is this guy to judge? He has to pay someone to fuck him, and what? He wants her to sit on a shelf for six weeks twiddling her thumbs until he gets around to saving up enough money to see her again? Jackass.

That evening, I had dinner with my creepy lawyer friend (the one who gave me all the advice when I entered the business—and which I did the opposite of everything he’d suggested). He told me about how several men in the community criticize him on message boards for bringing books into brothels. They think it’s weird.

He also showed me the room of the homeless whore he took in who ran away to get back on drugs. He showed me the clothes she left, the clothes they bought at a thrift store, and the almost empty tube of toothpaste in her bedside drawer (“She has a cavity she can’t afford to get fixed,” he said, “so she obsessively brushes that one tooth after eating or drinking anything. Now that she left her toothpaste here, I wonder how her tooth is.”). There was also Ben Gay for her leg with the varicose vein, the row of black Frankenstein platform shoes, the “Trouble Finds Me” tee-shirt (never has their been a more appropriate logo tee for a crackhead), and a list of desirable qualities in a boyfriend she’d written on a sheet of notebook paper.

The two items out of a list of about 20 things that were in all caps and underlined with squiggles? “HAS A JOB” and “CAN GET HARD.”
Tags:
Views: 1112
Related articles