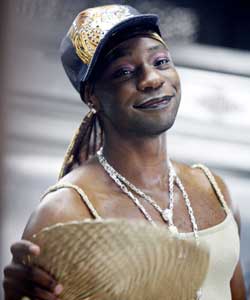 The True Blood characters of Lafayette and Jesus both appear to be extreme examples of gay characters, with Lafayette embracing stereotypes while Jesus rejects them. It’s common knowledge that True Blood’s creator and producer Alan Ball is openly gay, but does his sexual identity give him free license to traffic in stereotypes?
Welcome back for another look at sex and gender issues in HBO’s True Blood. We’re closing in on the end of the show’s fourth season, so if you haven’t yet, make sure to check out our earlier articles on the show, including a look at Tara’s transformation into a cagefighting lesbian, a closer read of the series’ witches and more.

This week saw what we hope is the end of the “evil baby” storyline, which was resolved after Lafayette was possessed by the spirit of a long dead patois-speaking black woman. As a group of Bon Temps residents tried to figure out what the hell was going on and why Lafayette was referring to himself as “Mavis,” the lovably idiotic Jason asked Lafayette’s brujo boyfriend Jesus Velasquez whether Lafayette played the woman when they were together.

In addition to being a welcome bit of comedic relief during a scene and storyline that has taken itself painfully seriously, the throwaway line also brought attention to the very stark differences between Lafayette and Jesus. When it comes to Lafayette, there’s no other way to say it: He’s extremely, flamboyantly gay. In fact, to someone just peeking in on the show, chances are he would appear as nothing more than a clichéd stereotype, given his eccentric clothing choices, sassy mannerisms and tendency to call his female friends “bitch,” “slut” and “hooker.”

Way back in the first season of True Blood, however, there was more to Lafayette than just being Bon Temps’ resident wacky homosexual short-order cook. The character played with audience perceptions by embracing traditionally contradictory roles: He wasn’t just a semi-crossdressing gay man; he was also a big muscley drug dealer, ready, willing and able to throw down when necessary. Since becoming involved with Jesus, however, much of that characterization has been lost.

Some of that can be chalked up to Lafayette’s traumatic experiences with Eric and Pam, but the last vestiges of the characters badassery seemed to dissipate soon after he took up with Jesus. The couple is a study in contrasts, as Lafayette performs homosexuality at every possible opportunity, while Jesus could likely pass undetected by all but the most scrutinizing gaydars.

Portraying any minority character can be a tricky job, as there’s a delicate balance that must be achieved. You can’t embrace all the most stereotypical aspects of a group without ending up with an offensive caricature. But you also can’t ignore stereotypical traits, or you risk whitewashing the character – which can be equally offensive while also losing what makes the character’s identity interesting.

Lafayette and Jesus both appear to be extreme examples of gay characters, with Lafayette embracing stereotypes while Jesus rejects them. It’s common knowledge that True Blood’s creator and producer Alan Ball is openly gay, but does his sexual identity give him free license to traffic in stereotypes? Lafayette and Jesus are both very close to standard straight perceptions of gay men: The flamboyant feminine type, and the “normal” one who acts straight. Are either of these portrayals offensive, or do they fit in appropriately with True Blood’s consistently campy characterizations?

Sound off with your thoughts about Lafayette and Jesus in the comments below, and then make sure to watch True Blood this Sunday at 9pm on HBO, and catch us back here next week.
Tags:
Views: 1128