The Whore Journals, Part 5: A Donation For My Shoe Fund 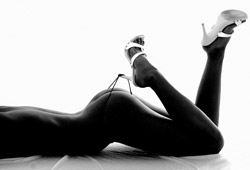 The lawyer, the peach eater and a date for coffee…
April 3

After a few hours sleep, I got up to prepare for my second appointment. He was coming over, and wanted me to have a few pairs of shoes on hand for him to try on me. I’ve discovered that prepping for an escort visit is a lot like managing a bed and breakfast. You have to have clean sheets, a towel by the bed, condoms on hand….

He arrived, a light-skinned African American lawyer with a moustache, and he couldn’t have been a sweeter guy. Extremely polite and respectful, he couldn’t stop talking about all of his odd collections—my kind of guy! He has a porcelain shoe collection, Star Trek stuff, Cuban pantyhose hidden so his wife won’t see them…I immediately felt curious to know what his home life was like—how his house was decorated, how he interacted with his wife.

We went back to the bedroom, and he gave me money, which he called “a donation for your shoe fund.”

He alternated between talking with me about interesting things (race, English grammar, how he likes cats and is a lawyer) and slowly undressing me and marveling at my every feature. He traced my eyebrows with a finger and stared intently at my face, then placed a gentle kiss on my nose ring. He told me my eyes were like the Caribbean Sea, and he traced my back, my arms, kissed the palms of my hands. Then he worked his way down to my legs.

He pulled off my shoes so carefully, peeling down my thigh-highs with the utmost care. He revealed my feet and was so delighted to cradle them in his hands. He pointed out the insteps and rubbed on them, and then he sucked on my toes. You can’t imagine what it’s like to have a man suck your toes as he gazes up at you—it’s like he’s filled with grace. Total foot worship.

I only saw him that one time.

And then later that day, I met my next client.

It’s a very weird sensation to be waiting for a guy sight unseen that you’re going to fuck. This one was a regular professional older overweight married white guy, very sweet, bland, and respectful. He visited with me in the middle of his workday, and before his 3:30 client appointment.

He wore an immaculate grey suit, a crisp white shirt, and gold cufflinks. When he went down on me, I pretended he was an older guy with a young, beautiful woman, as I think the contrast is sexy. Wait, this was real. I didn’t HAVE to imagine anything! He ate me three times to orgasm.

And left money on the dresser.

I Got Picked Up at Starbucks

I got up bright and early to prepare for my 8:30 appointment with a bigwig architect in town. We had spoken on the phone to discuss details, and he got so excited when he found out I was Jewish, as he is as well.

The plan was for us to meet at Starbucks. I was to dress professionally, with my hair pulled back and wearing glasses. We would have coffee and talk there, then at some point I would ask him to continue the meeting back at my place.

I got to Starbucks and ordered coffee. I saw a guy standing in line that I thought might be him (he had shown me his company website with his photo) and I gave him a very knowing sexual look. Oops, it wasn’t him. Jeeze, I wonder what that guy thought! I could tell I sent a shock through him.

My client arrived, and I was supposed to come across as a confident, sexy woman seducing him, but I couldn’t stop blushing and looking down, smiling. It was so sexy and odd! He probably thought I was in over my head. Still, he liked that concept as well.

He followed me home. I felt like I was drunk driving, I was shaky and high over the craziness of the situation.

We went to town on the couch. He’s very meek in real life, so he got Dom with me. He never gets to be dirty, has never fucked a woman’s face; is a very proper guy. So he went wild with talking dirty and calling me his “little Jewish slut.” Hee, hee!

He took his shirt off and he was mega hairy, even his back and upper arms were thickly covered. I thought it was hot—it fit my beast fantasies. Next time he wants me to wear a plaid skirt and ankle socks.

We alone share this secret side of him. I could tell it gave him a huge self-esteem boost.
Tags:
Views: 1254
Related articles