Respect for the Small Soldier 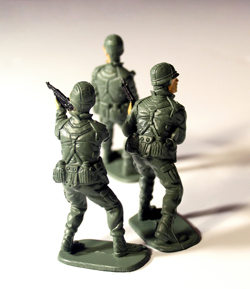 I am asking you today to give a respectful salute to a soldier who has gone on many a mission, sometimes grueling and even dangerous ones, to bring pleasure to couples, threesomes and moresomes in whatever rooms we may choose to rut and copulate. He’s lean and helmeted, often with a functional but flimsy hood over his helmet, but he has a tough job sometimes. Also, he makes mistakes. But let us treat him with dignity, and allow me to help you understand him a bit better.
Yes, I speak of the penis. I come to speak of his greatness and his failings, his potential and his challenges.

Men may be tempted to check out at this point, since they have a pretty thorough knowledge of this territory, but if you’re a young man, stick around because I have some news you need to hear later on, even though you may not want to hear it. Men older than my middle-aged self may want to chime in through the comments to add to the lore that I shall impart upon you now.

But before we get to the sex…

…let me explain a few things about the small soldier when he is on maneuvers in the bathroom.

Ladies, we men do not piss on the toilet – and sometimes the floor – to mark territory, or to irritate you, or because we’re hopeless slobs. OK, that’s sometimes true, but there are bigger issues at play here, and I think you need to understand how the penis works and the expectations of how we should piss with it. Chances are that no man in your life has done this, just as you have probably glossed over many issues with the functioning of your vulva and vagina.

First, women sit on the toilet, and therefore are not as messy simply because the laws of physics are in their favor. You’re closer to the bowl of the toilet, so you don’t spew urine anywhere. However, before you get too proud of yourselves, you also are capable of leaving droplets of fluids. I’ve encountered drops of pee on the toilet seat after my wife has left (on a few occasions) and I’ve seen plenty of red splotches during her period on the bottom of the toilet seat and on the rim of the bowl. Women may not be living in glass houses on this matter, but they live in houses with many windows, so they should resist the urge to cast stones.

So, we men typically stand. By the very virtue of this fact, with the pee coming from above the bowl and traveling a decent distance, there will be splashing. We will not always know if a splash has caused a large drop of urine to fly out and slide down the outside of the bowl. We also shouldn’t be expected (in my opinion) to wipe up all micro-droplets on the rim of the toilet bowl every time. The seat is sufficient to protect you from contact with that or even having to see that.

However, I am a firm believer that we men are obligated to put down the seat when we are done. Not all men share that philosophy, but I think they all should.

Men who pee standing while the toilet seat is down should be flogged. And not in a nice, sexy way. Let’s not be animals now, gents.

Also, be aware that in addition to our soldiers being above the bowl and gravity not always being kind, we piss out of a very small slit. Sometimes, the urethra likes to play jokes on us by sticking together in one or two very small places. This is sufficient to cause our stream of pee to split into two, three or even more streams, most or all of which will not be going in the direction we aimed. By the time we realize this because we don’t hear any splashing or feel a spray of pee against our own leg, one or two seconds will have passed and a lot of mess can happen in that time.

Yes, we should wipe the toilet rim when this happens. And any obvious puddles on the floor. No, I do not think we should be expected to get down on hands and knees and inspect the entire toilet area.

You might ask: “Why don’t you filthy men just sit down to pee?”

Many of us don’t want to, nor do we think we should since we don’t have to. Also, many women would make fun of us if we did, not to mention any other men or boys in the household.

My dad had a near-OCD-level of cleanliness when it came to the bathroom. He always sat down to pee, and I assume he still does. I spent much of my childhood doing the same except in public restrooms. However, when I got involved with the woman who would become my wife, and frequent proximity to each other in bathroom duties caused her to witness me doing this, she was confused and, I think, a little mortified. To her, a man should stand up to pee, and I suspect a lot of women feel that way. She pretty much told me so, and I now stand to pee and have for some 15 years. There’s a lot of social pressure for men to pee standing up. So please learn to deal with it, unless you have a flexible and adaptable man and can resist any urges to emasculate him at some later point for “peeing like a girl.”

For the record, I think most of us men would love it if the women could pee standing up, if for no other reason than it would make camping and emergency urination situations much easier for all involved.

That was a lot of talking about urine with no mention of golden showers. I apologize.

I know the little soldier looks kind of tough and resilient. He’s flexible and stretchy and all that. But he also has some extremely sensitive parts, especially around the head. In addition, he’s out in the open, unlike your parts, and is vulnerable to enemy attack. Also he carts around a pair of sacks that are even more exposed and sensitive to slapping, kicking and biting, so don’t assume too much. There’s a reason we men cringe when we see crotch punches in movies and such, or see a man have his testicle nailed to a chair (rent “The Serpent and the Rainbow” to see what I mean, and cuddle your man after he’s forced to witness the scene in question). In other words, be gentle with the small soldier when it comes to teeth, nails and anything caustic or hot.

In a related note, the underside of the penis head—the rim of the soldier’s helmet, if you will—is extremely sensitive after orgasm. It can be a pleasure, but may also border on (or extend beyond) the line of pain if you continue to stimulate it for too long after a man comes. Just saying you should be aware, and not be insulted if he asks you to stop. I certainly respect my wife when I give her oral and she pulls my head away shortly after she comes because her clit is oversensitized.

Also, don’t make fun of our dicks when they are small. I mean, if they’re really tiny even when fully erect, to the point you cannot feel them, you might not be able to resist—but even then try to have some decorum. The fact is that the penis is often very small. Much smaller than when erect. Size of penis when flaccid often has no bearing at all with regard to erect girth and length. My penis when flaccid can range from shy-looking little nubbin to almost full erection length but soft. This depends on a variety of factors, many of them involving cold. I’m amazed at the number of women who don’t realize how much smaller a penis can be when it’s not erect, even though they’ve been sexually active for years.

Also, sadly, sometimes the penis will not rise to the occasion even in the sexiest situation. When the soldier cannot stand at attention, you will do him no favors by pointing this out or ridiculing him for it. If we don’t get hard, that doesn’t mean we aren’t aroused and willing to have sex. In fact, we often are, and that makes the lack of erection all the more frustrating for us men. It leads to erection-killing stress, and that often leads to performance anxiety later as we fear it might happen again, and sometimes stress ourselves out so much that we do fail once more.

In these situations, saying “it’s OK” often won’t help, because you often don’t mean that and we can sense it. Instead, just move along with other sexual activities and keep things as fun and relaxed as possible in the hopes that whatever is causing the problem will pass. Do not take it personally, unless the guy tells you he can’t get it up because he thinks you’re ugly or something.

I don’t know what’s up with that, but maybe its an evolutionary thing to try to keep older male animals encouraged to just shoot their load quickly so that they can compete sexually against younger, stronger bucks in mating situations. I don’t know; just a theory—in any case, it sucks because I often don’t want to rush.

Finally, even young men typically can’t get erect and come again right after orgasm. That’s simply anatomy and biology at work. Accept it. Play lightly, cuddle, kiss or take a break for at least 15 or 20 minutes, and maybe you can coax the soldier to put in another tour of duty.