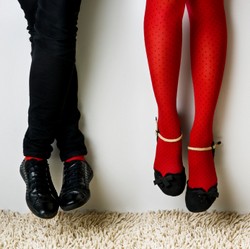 Is that a Couture Bliss Bullet in your pocket, Ma’am, or are you just glad to see me?

Editor’s Note: Hello all. We’re pleased to introduce you to Alan and Michele, a married couple from … an undisclosed location, parents of a grown son, and budding connoisseurs in the sex toy world. Each month, this daring duo will test drive a newfangled sex gadget and share their adventurous on-the-road account in their continuing pursuit of sex toy nirvana. For their debut outing, Alan and Michele journeyed beyond the bedroom—and the house—carrying a concealed weapon of pleasure in Michele’s panties.

Alan: So, it seems like everyone is going “green” these days. People are buying earth-friendly this, recyclable that, and more rechargeable doo-hickies than you can shake a stick at. Now, I’m about the ecology, and I’m no different than anyone else… Who likes forking out the cash for batteries all the time—especially for something you use really often? But even though it’s one of the few rechargeable remote control bullet/egg vibrators on the market today, I’d be lying if I said that was the main appeal of the Couture Bliss Bullet.

Nope, they got me at the remote unit. We clocked its range to about 27 feet, which was pretty damn impressive. Even more remarkable? It works through car doors, floors, and even the two walls and a metal restroom stall at a local restaurant where your wife has retreated to try to get the vibrating egg out of her pants when you won’t stop teasing her with it. Michele would have probably been more irked about that little stunt, but it’s funny how orgasms can buy forgiveness.

Michele: Well, the restaurant thing was partly my fault. I’d tried the bullet out a little on my own, and decided that it was too big and I was too small to be able to walk around comfortably with something the size of a hen’s egg hidden up the old cooch. I figured I could just stick it in my panties and be good to go. It’s certainly strong enough to work that way—but unfortunately, I didn’t think about the noise factor of wearing rather than inserting it.

It’s not really “loud,” per se, but the low hum that it made in our bedroom was a a lot more noticeable in a quiet restaurant—not to mention that it was also vibrating the seat of the booth, and I was afraid I might be giving the guy behind me an interesting sensation to go with his steak!
There was no graceful way to hide the toy in my hand even if I could have managed to sneak it out of my pants, and of course, I had no purse to stash it in (Note to self: Start carrying a purse!), so I did retreat to the restroom.

Alan: What she’s not telling you is that she forgot that there was an “Off” button on top of the egg. That’s okay, she didn’t tell me about it either, until after I’d been sitting with the toy buzzing away in my pants, too. See, I couldn’t hear it in the restaurant, nor had I played with the bullet myself yet, so I let Michele tuck it behind my package before we went grocery shopping one day.

I was doing fine with the first level of vibrations because it wasn’t much more than a gentle massage, but once she started cycling through all patterns, things began “coming to attention,” if you know what I mean, and I could hear my crotch humming.

Let’s just say I was getting a little more pleasure out of it than you want with strangers around, so I excused myself, went to the parking lot and waited in the car. 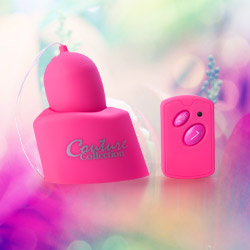 
But, by that point I knew it was a toy that could turn both of us on.

Michele: I can’t wait until we both have time to use it in the bathtub together. It was fun in the shower, but I’m thinking that using it in standing water will spread out the vibrations even more, and we’ve already discovered that the retrieval loop makes it easier to hold onto than some of our other toys.

Alan and Michele: We zeroed in on the Bliss Bullet’s public play potential because that’s the first thing that came to mind when the words “wireless” and “remote” came up, but this is actually a cool couples toy for any situation. (We don’t recommend it for anal though, unless you consider having a doctor go spelunking for a lost toy to be a good thing, but other than that, anything goes.) If you do plan to go public with your pleasure like we did though, take our advice: If you’re going to let this bullet ride shotgun, be sure you’ve got a little extra ambient noise to camouflage the noise.
Tags:
Views: 2632
Related articles

Alan & Michele
A rather adventurous couple who appreciates the simple things in life. Michele is constantly involved in some project or another, and thinks a day without some sort of sexual activity is wasted time. Alan's a quiet sort of guy, but he's got an open mind and a good sense of humor, and is trying his best to keep up with Michele.

We hope that you find our reviews useful, and if you aren't an affiliate and would like to get 15% off all your EdenFantasys orders, feel free to use our discount code "FFR" in the shopping cart.

Other articles by Alan & Michele