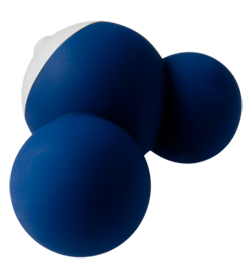 Is it a souvenir from Walt Disney World? A paperweight? Perhaps a deformed Pokemon? If you answered yes to any of the above, I'm afraid you're wrong—but it's easy to be confused if you've never heard about the YOOO, Fun Factory's latest creation. Sexy may not be the first thing that comes to mind when you see it, but once you feel how powerful this guy is, you'll quickly change your mind.
Editor's Note: We'd like to introduce you to Jesibel and Josh, lovers of sex toys and trying new, exciting things. They've agreed to let us send them strange, new and possibly wonderful things...which they will try out and give us a she said/he said perspective on the product. Each month, you'll read what they both think about the toy they've tried and get to see the toy in action in their video review!

Jesibel: I hadn't even heard of the YOOO until I found out one was being shipped to me. Being the 21st century consumer that I am, I immediately googled it- and gaped at the screen when I saw the results. Reminiscent of an upside-down, asymmetrical Mickey Mouse head, the YOOO is unlike anything I'd ever seen before- particularly and sex toy I'd ever seen before. Josh looked over at my monitor, almost dumbfounded, and let out a “What the...?” From that moment, I could tell it would be a great addition to our toy box, considering we couldn't even quite figure out just what to do with it. Boy, was I right!

When we received the YOOO, we didn't waste any time- I grabbed a razor knife and tore into the package, feeling like a giddy child on Christmas morning. When I pulled it out of the box, Josh smirked at me and laughed. “That thing is supposed to get you off?? It looks like something from the Jetson's!” I'll admit, I was a bit skeptical myself. How could something so silly looking and oddly shaped as the YOOO be as amazing as it claims? But once I felt how flexible it was, how easily it fit into the palm of my hand, and of course how deep the vibrations were- the doubts in my mind began to fade away.

I decided to switch things up a bit and test it out on Josh first. He really loves it when I play with his taint while giving him oral or a hand job, so I knew the first place the YOOO would venture would be right under his balls. I've tried using other vibrators there with little luck. Most just aren't shaped properly to get a good grip and stimulate the right areas, but the YOOO's unique design made it incredibly easy to hold it exactly where I wanted it. Even better, the shape of the YOOO made it perfect for stimulating his shaft, too. It formed somewhat of a half circle around his dick, and I was able to twist it around in my hand and tease him with it's multitude of settings. Switching back between his shaft, balls and nipples, I was able to get him really worked up before I finished him off. While I may not have teased him anywhere that I wouldn't have with my fingers or tongue, it was so refreshing to find a vibrator that I can use on him just as much as I use it on myself! And the exploring had just begun...

Josh: Finally, a vibrator with some balls! The YOOO is a favorite of mine because of its powerful, thumpy vibrations that are unique in our collection of vibrating toys. Getting Jes in the mood was no trouble with the YOOO, I simply snuck it out during a massage and took the vibrations south after some gentle kneading of her back using some of the more "tame" settings of the toy. One thing that stood out to me during both of her "massages" was how easy the YOOO was to hold onto. It's extremely ergonomic and easy to grip no matter what position I found myself in. I found the toy to be well suited for fitting snugly along many of the curves on her body, but it performed best in between her legs. Each of the settings programmed into the YOOO are very unique, and will likely suit any mood. The buttons see to it that settings are changed only when deliberate, which is a good thing considering that my favorite feature of this toy is what I have dubbed, "The Orgasm Button". Said "Orgasm Button" results in some seriously turbocharged vibrations which always result in a loud yelp, followed by her desperate attempt to push the vibrator away from her clit just long enough for her take a breath. As far as vibrators go, this thing is serious. Seriously powerful, and seriously easy to use.

I have a tendency not to bring toys in the shower because they turn out to be more of a hassle than anything, and I just get frustrated. With this in mind, I grabbed the YOOO and headed downstairs for some steamy alone time. This time I was looking for a quick fix, so I pressed the YOOO snugly to my body, knees buckling with every thumping vibration. If there's one thing I can say about this toy, it's how perfectly it fits the curves of my lady bits. No matter which way I place it, the YOOO always hits the right spots. It's super flexible, so I was able to cup it in my palm and make an exaggerated come here motion, moving the balls against me for that extra bit of stimulation. I played around with the settings, cycling through the seemingly infinite levels of vibrations. Ultimately, I ended up settling on the first of four programs, and let it tease me with it's back and forth patterns. When I couldn't handle it anymore, I hit “The Orgasm Button,” cradled it firmly against me, and felt the blood pump into my clit as I lost control. Talk about intense! Needless to say, I've found my perfect shower toy- powerful and easy to hold even in the slipperiest situations!

Just when I thought we owned pretty much every type of toy there is, along came the YOOO. I didn't even know what we were missing until we found it- but now that we have the YOOO, I wouldn't want to live without it. Despite it's giggle-inducing appearance, The YOOO has proven it's worth time and time again. After all, looks aren't the only thing that matter!
Tags:
Views: 3290