The “Traditional” Family? Anything but. 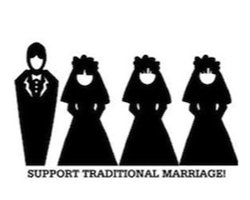 http://www.bilerico.com/
The argument for "One Man. One Woman." Is anything but traditional. Looking back at human history, you'll be surprised that that so-called "traditional" family is the farthest thing from traditional.

"Children are not born programmed thinking only one mom and one dad is they way it’s supposed to be."

Focus on the Family. The National Organization of Marriage. Protect Marriage. You’ve probably heard about these groups that believe that only the “traditional” family, one with a mother, father, and children is the only way to have a productive society with healthy growth and healthy children.

No, this will not be an article promoting gay marriage. It should be a non-issue; marriage is a right everyone should have, so arguing it (here) is pretty much moot. The focus will be on the tenants of these traditional marriage groups. More accurately, with the term “Traditional.” The word traditional denotes being old and given to practice or ceremony. It can also be described as what is orthodox, which has roots to correct and “right” in Greek. Traditional Marriage groups argue that their version for the family is traditional and orthodox.

However, if you look at the course of human history, the nuclear family falls deeply into the minority. It also depends on where you look. Interestingly, history has shown that there are many successful forms of family structures. All you need is a little understanding of history and human nature.

We’re Designed to Be Sluts. Albeit, Smart Sluts

Perhaps the wording is a bit crude, but it is true. From an evolutionary perspective, studies are showing that human beings were not designed to be purely monogamous. There are many indicators of this. For one, humans have the largest penis to body size when compared to other apes and primates. Why does the penis matter (besides the obvious)? Studies have shown that penis size in males is linked to the nature of that species’ sexual dynamics. The principal is: the bigger the penis, the more polygamy and amount of sexual partners the female has.

Penis size and shape is an evolutionary arms race. The male penis is designed as a combatant against fellow males. The head of the penis is bulbous and flares out. When thrusting, this allows the male to remove other sperm from the vagina. A longer penis also means that it can go deeper in the vagina and give sperm a smaller journey to the egg. Larger testicles mean more sperm to compete in the race to the egg. The converse of this theory is true. In more sexually monogamous species, like the gorilla, the male organs are smaller. Females mate with less males at the same time, so there is less need for a competitive edge like humans have.

However, there are different levels of polygamy in the animal kingdom. This is very dependent on how offspring are brought into the world. For example, sea turtles mate and never see each other besides that. The female lays eggs in the sand and baby turtles emerge ready to face the world. Species that have self-sustaining offspring don’t tend to have mate relationships. Animals that have more helpless offspring must invest more energy in their offspring so they survive.

Let’s make an example. Say we have a man named Caveman Jim. Caveman Jim’s goal is to pass his genes on as much as possible. Caveman Jim could have sex with lots of women, and once they’re pregnant, he could move on to the next woman. While this would give Caveman Jim lots of children, they probably won’t last very long in the caves without him. What is the point of making offspring if they won’t survive? The genes won’t pass on. The goal is to have as many surviving children as possible.

So, while Caveman Jim wants to have lots of children, he realizes that living children are needed to carry on his line. Thus he stays with the woman he impregnates. Still, Caveman Jim won’t stay long. He only wants to stick around until he’s confident his offspring will survive without him. Then he’ll move on to the next woman and repeat the cycle. Now, the story may be a little sparse, but studies are showing this is a very plausible dynamic early humans had. A human male's reproductive success is determined by the number of partners he has while a woman's is by the amount of resources she has. This could also be why men are more apt to engage in short term sexual relations than women. We'll go more into that later.

Regardless, we have birth control now, so babies are not always the result of sexual activity, but this pattern is prevalent even today. Even in a western culture that promotes monogamy, the majority of humans are serial monogamists at best. We may move from one relationship to another. Whatever the reason, most people will have more than one partner. If they marry, they are more likely to get divorced than stay married. Interestingly, the average relationship will last approximately four years, not seven (thought of as the “seven-year-itch”). Ever wonder why?

That’s not to say it’s wrong to be monogamous. It’s just to say that human beings were not solely monogamous, and that there is a cardinal rule: culture changes much more quickly than evolution. We still have the biology of our cave ancestors. Our culture may make us want one thing, but it's important to know what our wiring might tell us. It’s okay to be monogamous, but in no way is polygamy wrong. It is technically more natural if you plot the course of human relationships in societies over time. And multiple combinations of polygamy are also more common in human history. This brings us to another popular point traditional marriage folks like to make.

One Man. One Woman.

We’ve already gone over our biological history, but we can look at out cultural one as well. Technically, the traditionalist is somewhat correct. There was at least one male and one female during the caveman days raising children. Granted, that happened in the caveman era and only for spurts of time (and usually early humans formed cooperative groups), but it did happen. Still, if you look at history, you’ll see even that changes as well.

As stated, we have a few principals that are based on studies and core tenants of biology, especially human biology. One is that penis and testicle size, in proportion to body size, is a relatively reliable predictor of sexual dynamics of a species. Another is that adult animals will have differing relationships depending on how much it takes to raise the offspring. In addition to that, environment plays a large role in how offspring are raised.

Human beings are what is called K-selected. This means that we are the type of animal that has few offspring that are very costly to raise, but each has a high chance of surviving to reproduce. The other type are r-selected, like our previously mentioned turtles. Lots of baby turtles are created, they do not take as much energy to make, but only few will survive to adulthood. As humans with few and precious childbearing opportunities, resources are needed so our children survive. Resources such as food and shelter need to be available. Some environments are more forgiving than others. The presence of resources is known to change sexual dynamics and reproduction.

Women have more of a cost when bearing children: they become pregnant, carry the child, and give birth. This cost is much higher than the male at this point; he only gives some sperm. Because of this unequal initial cost, women are allowed to be choosy in selecting mates (to scientists there are many other conditions, but let’s stick with this). A female can only reproduce so many times in life because of the energy and time it takes to raise each child. This is why they look for mates with resources.

Coincidentally, polygamy, where a man has multiple wives, is/was one of the most popular and common dynamics throughout human history. The history of patriarchal societies allowed men to work and acquire resources. This allowed them to take care of multiple wives and have all the wives bear children. The man is able to pass his genes on. Women are able to have children that survive. This set up worked where resources were present and abundant. This leads to men competing with one another for resources in order to reproduce with women. Some men, mostly in royalty, had harems.

But let’s flip it around. What if resources are very limited? In this situation, the dynamics reverse. Yes, multiple men will share a household with one woman and it is then called polyandry. This is a rarer occurrence, but such societies have been documented in nomadic groups, areas in China, and northern India, to name a few places.

Another important thing to note is that the men will almost always be related. The woman will tend to have husbands who are brothers. Why is this? Simply, it’s better to raise your brother’s child than a stranger’s. Your brother is related to you when a stranger is not. You are still passing your genes forward and assuring each child will survive.

Basically, the idea that one man and one woman is traditional is presumptuous at best.

Another thing traditional marriage advocates say is that having homosexual parents creates mal-adjusted children. Or some allege that there are no long-term studies showing how these children will fair. Interestingly enough, these groups are quick to condemn homosexual parents, but look at it this way. What's better? Two or more good parents or one good parent? Single parent households are shown to have more difficulty on average (Note: there are men and women who want children without a spouse. These individuals plan their children and tend to have larger support networks established such as family members. In my referencing to single parents, I refer to couples in which one parent leaves the family situation). One parent means one income, less time the parent has for the child, and more stress on the single parent. Granted, there are amazing single parents out there who are being both parents. Still, where’s the focus on helping some single parent households? As traditional family activists, they don’t seem to be saying much on that situation.

Perhaps the focus shouldn’t be on just “having” a “traditional” family. Studies can be thrown back and forth to infinity, but it boils down to one fact: a good parent, no matter what form they are in, are much more likely to raise happy and productive children. Perhaps these traditional groups should realize that being heterosexual (monogamously) does not transform you into a good parent. There really is no “traditional” if you look at history. There is no right or wrong. Children are not programmed thinking only one mom and one dad is they way it’s supposed to be.

So why the fuss?
Tags:
Views: 2017
Related articles