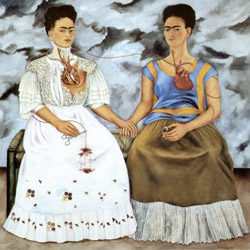 Lustful thoughts, wet dreams, masturbation—these things are just as integral to adolescents as pimples and bad haircuts. Many of us grew up in homes where sex wasn’t discussed, but there was an understanding that our compulsions were not wrong—they simply were.

Being gay is not like that. Being gay is painful. It is the belief that your sexuality must be repressed because acting on it would start a shit storm you’re not sure you’d live through. Being gay is the keen awareness that you are somehow breaking your parents’ hearts by being yourself. Budding sexuality can be embarrassing, but coming out can be downright devastating.

For some reason it took the recent rash of gay teen suicides to really send the point home: Being young and gay is incredibly difficult. Now, what if you had hyper-traditional Mexican parents who clung to their gender roles and embraced Catholicism as if their lives depended on it?

Traditional gender roles are alive and well in homes with immigrant parents and first-generation American children. Mama tends to the house and kids. Papa is macho and quiet—and what he says goes. Girls are raised to be subservient and polite, many having curfews well into their twenties. As long as they contribute, boys come and go as they please. The family attends church on Sundays, and often, adult children live at home, waiting until marriage to move out, despite being college educated and having steady jobs. It’s the typical nuclear family, Mexican style.

During adolescence, Lydia, Iveth, and Felix tried to convince themselves they were straight, but each eventually came to the realization that their homosexuality wasn’t something they could ignore. In high school, Lydia wasn’t aware there was a label for what she was, she just knew she was drawn to girls. Felix can distinctly remember watching Aladdin as an 8-year-old, and how the bronzed, buff cartoon character elicited the most delicious ache “down there.” At night, he’d dream of kissing the strong and handsome men featured on the novelas his mother watched during the day, waking up in the morning to find a sticky mess in his pants. In seventh grade, Iveth couldn’t control her roving eye in the girls’ locker room.

Growing up in an environment that so strongly emphasizes family and the roles each of us play in that family can make coming out feel like a betrayal. Just as these three Mexican American twentysomething’s instinctively knew that they were gay, they also knew in their bones that this would be a part of their life they could never fully share with their loved ones.

Iveth has a church-going mother and a father who routinely “gay bashed,” taking every opportunity to use the term “joto” or fag when he saw fit. Outwardly, Iveth was studious and respectful, but inwardly she was everything a good Mexican girl shouldn’t be: Gay, uninterested in marriage and children, and deeply opinionated. Coming out would likely sever ties to her family, and despite being uncomfortable with the dynamics in her childhood home, she still wanted to be a part of it.

In college, Iveth began going to lesbian clubs like Truck Stop in West Hollywood. Being able to openly dance and kiss other women felt as freeing as being able to fuck one, but still no one in Iveth’s family knew her secret.

A few years ago, the structure of Iveth’s family changed and her brother became the man of the house. Previously the two had gotten along well, but now that he called the shots, Iveth witnessed his personality shift and they clashed often.

During this time, Iveth decided to come out to her sister, who was quick to point out that being an undocumented woman of color was hard enough without also being gay. At 24, Iveth suspects the rest of the family knows her secret. During arguments with her brother he will refer to her as a “pinche lesbiana.”

Even as she struggles to come out, she hates labels like “lesbian.” To her, labels come with too many preconceived notions. As her parents hold on to the hope that she will one day introduce them to a boyfriend, Iveth counts the days until she can move out and then officially come out to her parents.

Felix had numerous girlfriends in high school. He was the prom king and pictures of his crowning still adorn his home. It was a sham of course, but he did his best to play the part of the straight guy. Felix didn’t have the chance to come out; his mom made the discovery after coming across some revealing writing. In retrospect, it was the best thing that could have happened. Through her eventual acceptance of his sexual orientation, Felix was able to begin working on accepting himself—a process he still struggles with.

Growing up in a Catholic household, Felix remembers the whispers surrounding his uncle’s illness. As a child, he witnessed his uncle’s battle with AIDS, and very quickly made a connection that’s still hard for him to shake, despite being an educated adult: If you are gay, you will die of AIDS.

Recently—eight years after his mother confronted him—Felix came out to his father. At 26, he was in his first serious relationship with a man, and felt compelled to share the news. After revealing his secret, Felix was both relieved and shocked to hear his father say, “I love you,” but this acceptance came at a price: Felix was never to bring a boy home to meet his family.

Last Thanksgiving, Felix looked on as his younger sister introduced her new boyfriend to his parents. Growing up, he had countless privileges his sister wouldn’t have dreamed of, but he would have traded it all in to be able to sit next to his boyfriend at the family table.

Like Iveth, Lydia dislikes identifiers like “lesbian.” She’d rather be known for anything other than her sexuality. If pushed, she identifies as gay, and it is this tiny sliver of who she is that’s caused her the most pain.

Three years ago, Lydia began experiencing panic attacks and depression. She knew the source of her anguish, but couldn’t reveal it to her parents. In a moment of desperation, she reached out for help, and shortly after, began therapy.

During this time, her mom went to Mexico and Lydia grew close to her father. As their relationship improved, her secret began to eat away at her until one day she couldn’t take it anymore. She called her dad into her room and though the words “I’m gay” never left her mouth, her revelation that she “liked girls more than guys” was loud and clear. Lydia’s father told her to keep the secret from her mom, and should she ever find out, her father promised to support her and move out with her if it came to that.

Despite her father’s acceptance, things are still not easy. Recently Lydia learned that her mom agreed with singer Paquita La Del Barrio’s sentiments that children would be better off dead than adopted by homosexual parents. During a heated argument Lydia posed a hypothetical about marrying a woman and her shocked mom quickly dismissed the idea. Lydia’s still not sure if that constitutes coming out, but she longs for the day when she isn’t afraid of falling in love and all that entails.

Iveth, Felix, and Lydia all contend that if given the chance, they’d bring their partners around in a respectful way, limiting physical interaction and other signs of intimacy with partners, to make their families feel more at ease. After all, they were raised by good parents and taught to be thoughtful and polite, even when not being treated with the same respect.