A Conversation On Faith, Love & Open Relationships with Rusty Lazer and Corinne Loperfido 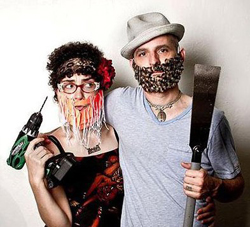 Jerome Gacula
Recently, Loperfido and Lazer took the time to speak to TinaV about their new blog and the specifics of their open relationship.
New Orleans bounce rapper Big Freedia is everywhere these days and chances are if you’ve gone to a show, you’ve encountered Rusty Lazer and Corinne Loperfido. Lazer is Freedia's right hand man, her live DJ at all of her touring shows. Loperfido, who is an artist and graphic designer, also happens to be one of Freedia’s fiercest dancers. The pair met in Austin in 2009 and despite a 16-year age difference, they decided to give a non-traditional relationship a go. So, for almost two years, the pair has enjoyed the many perks of working together, living together, and fucking their friends. After fielding a number of questions about the specifics of how their open relationship works, they decided to start a blog about this very topic. Open Relationships aims to provide a global platform for people of all races, genders, sexual orientations, and relationship setups to come together and imagine a world with less sexual oppression.
How did you come up with the idea for the new relationship blog?

Corinne Loperfido: Ever since the beginning of our relationship our friends have been asking us how we deal with the different aspects of our openness. We are both very patient listeners and we started the blog because we wanted there to be an open forum for all kinds of people to come together and share their experiences with each other, because everyone has a different voice and no one person can know the right answer to every problem. And obviously, we want our friends to be the best communicators they can be so we can keep having sex with them.

What do you think are the biggest misconceptions surrounding open relationships?

[bold|CL: That we’re all a bunch of dirty sluts trying to sleep with everyone and steal your boyfriends. If you're too complicated and don't want to be with someone who doesn't have plans to marry you, we don't want you either- or your boyfriend. In general, people understand why someone would be in an open relationship; the issue is that they don't think they are capable of dealing with their jealousy. Honestly, I don't think a lot of people are aware and honest enough about their needs and emotions to be able to articulate them to another person in a way that would allow for a good open situation. Another misconception is that we just fuck whoever we want all the time without saying anything or caring what our partner thinks. It is actually quite the opposite: we care very much about all parties involved and want to make sure everyone is feeling good.

Rusty Lazer: The number one misconception is that open relationships never work. That's about as ridiculous as saying that monogamous relationships work every time. I’ve learned that sharing your life with others is about living in a constant state of change. Success and failure are irrelevant. Flexibility is supremely important. Soft things bend, hard things break. Openness says, "I value you enough to trust you as you grow." From my vantage point, starting from this point makes the idea of "failure" less terminal.


The concept of an open relationship is different for every couple. How would you describe your relationship, what are the ground rules, what’s the set up?

CL: Number one: we trust each other 100 percent to be respectful and always tell each other the truth. Without that, you have nothing. We do not always "check in" before we hook up with a different person, but just by virtue of being together most of the time, we usually know before it happens. When I was away for a month living in a different city, I was seeing someone else on the regular. Rusty knew and he was totally cool with it. I did not have to ask him every time I hung out with this other lover. We trust each other to be safe, respectful to each other and to our partners, and try our best not to do anything that would unnecessarily complicate anyone's life. We also have a veto policy for special circumstances. If there is someone who one of us feels will be a problem, we can veto that person and there would be limitations on that relationship for the emotional and sexual well-being of our primary relationship.

Do ever see yourselves changing the status of your relationship to something more “conventional”?

CL: I would never want to limit my experiences to something that involved constantly double-checking to make sure my partner was okay with my actions. Neither of us want to have babies, a traditional job or career, to settle down in one place, to own pets, or to be married, so why would we want a traditional relationship either?

RL: I've already tried a bunch of "conventional" and "unconventional" relationships. They've all failed. Now I don't think of my relationships in those terms and I expect them to change and evolve. If it's conventional not to communicate your true desires to your partner, then I have no choice but to remain unconventional.

You’re both sexy as hell and often perform in clubs and bars, which I’m sure leads to plenty of opportunities for ass. This would be taxing on any relationship. How does it affect yours?

CL: Not as much as you'd think. Neither of us really drink or smoke and we're also not into fucking drunk people, so working in clubs where everyone is wasted is not really our ideal hook up spot. After a show, 95 percent of the time we are sweaty and tired and just want to get out of there. People definitely think we're both gay more often than they think we're a couple, so there are just too many factors working against us.

RL: The only time I end up hooking up with people at shows is if they are very direct or if they've been coming to shows for a while and we've had some time to get to know each other. As to it being taxing, Corinne and I are both really invested in each other's happiness and we encourage each other to take advantage of opportunities for new experiences.

You live together, but have separate rooms. What happens if your partner comes home when you have someone over? How do you handle these situations?

CL: We never have anyone over to the house without double checking. I have hooked up with people when he was at a long DJ night, but he knew someone would be over and our agreement is to text before showing up. There is at least one person Rusty hooks up with on a semi-regular basis and we are all totally chill, so I don't care if they are getting down in the other room while I work or go to bed.

RL: The main rules that apply are based on simple consideration. I don’t let my lover use my partner’s towel, bed, or anything else personal. I try to minimize any evidence of the other person in our shared space. When living in the same room, you should make the bed- basics. In separate rooms we're not so rigid, but I think as long as we're both in agreement that the house is sort of a sacred zone where the needs of residents trump any outsiders' wishes, then we tend to find strategies that work.

What strategies have you developed to deal with any relationship issues when they arise?

CL: We have a trial and error policy that allows us to take big risks and then talk about it after to see how we can improve in the future. One time early on in our relationship I wanted to have someone over to the house when Rusty was home, but he wasn’t certain how he felt about it. Because he agreed that we could try it out, it was up to him to deal with his jealousy and ultimately, he left the house. We later decided that it was not a good idea to have new lovers over when the other partner was home. There are other lovers who have been around for much longer and it’s totally fine if we all hang out together and make dinner.

Some assume that those in open relationships lack love or respect for each other because they’re not “faithful.” How do you respond to this?