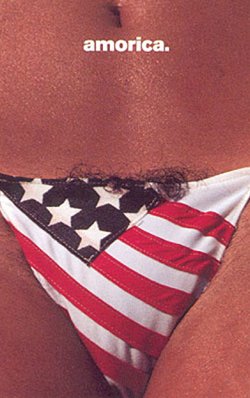 Black Crows "Amorica"
Every November, men allow their facial hair to run wild for cancer. So why exactly is the idea of women doing the same "just gross"?

"Mustaches are quirky and fun—women’s pubic hair is just gross."

I often read Slate because I think a lot of their articles are short but informative and remain interesting throughout. I happened to click a link that took me to a section called the "XX Factor" that was labeled with 'what women really think.' It was an article that discussed a funny video in which women proposed Decembeaver, in which they stopped shaving their pubic hair for a month for cancer. The men in their lives were all "A whole month!?" and the audience laughs. Because, ya know, pubes are yucky. And then at the bottom of the article, the author Torie Bosch actually said that exact sentiment. But it was not that body hair or pubic hair is gross, it's that WOMEN'S pubic hair is gross. Which leads me to something that is by no means a new issue, but is one that is continued to be accepted: why are there such different grooming standards for men and women?

For the most part, why is it okay for men to have their faces scruffy and bearded but women can’t let their vaginas do the same? For men, their faces are seen by everyone. When they show up to work, you can see their beard. Oftentimes, in America, this look is viewed as unprofessional. Nobody could say that having a hairy vagina is unprofessional.

"But, it’s so gross to get a face full of pubes when you are going down." That's the general consensus for why women shave. It is simply to clean up the task of oral sex. And we're supposed to accept that because, hey, they're performing oral sex on us. That's equality! Except, I'm pretty sure that men go down in November, which means that there is still a lot of hair involved in the situation. Except, not only is it limited to oral sex, but it included all kissing and even hugging! Why is it okay for there to be hair on a man’s face when he's performing oral sex, but not a women's vagina? It's surely just as messy.

This just irks me like nothing else. Personal grooming is a personal decision, and I don't understand why there is some sort of expectation on women to behave in a certain way that doesn't also exist for men. Personally, I shave. Not because society tells me to (because, honestly, not that many people are seeing my vagina!) but because I personally like the way it looks and feels. The anger at this is somewhat stalled by women like me. People who are offended by expectations to shave and yet not willing to stop shaving (I like being shaven; I shouldn't have to STOP because of other people. I shouldn't have my grooming affected at all by other people).

I'm not quite sure what I'm going to do to try and fix this issue. But I do know that I won't be happy until the issue of grooming is equal. After all, it's called personal for a reason.
Tags:
Views: 1788
Related articles