Female or Male ? That is the question. 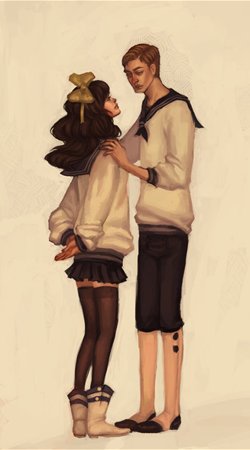 http://browse.deviantart.com/?order=9&q=girl+and+boy&offset=144#/d50l49i
Haven't you ever wondered how it would be if you was in your spouse’s shoes, and you changed sex? Well I'm Jaylin and I was born a female but ever since I was younger, I always wondered how it would be if I was a male instead of a female. Don't get me wrong I love being a female but I just think men got it easier than females.
Being a Female is great; we get an advantage to things. Like if we are at the store, we can flirt with the cashier and maybe get something for a lower price or even free. We can get into the club free, we have men opening the doors for us, and helping us with our bags. It’s easy for us to wear certain things, like heels, thongs, dresses, and lingerie. We also have a downside.

We get periods every month, bloated, all the pregnancy symptoms for 9 months, migraines, our feet hurt after a night of dancing in our 6 inch heels, some of us get into arguments or we end up fighting. When we need to use the bathroom, but there isn’t one around, so we have to squat and do all this work just to use it. We have to make sure our areas are correctly clean or else we end up getting an infection; no female wants that! We take pain when it comes to having sex, and pushing a baby out.

As a male, I think life is a little bit easier, no one really pushes them around, guys can’t get pregnant, and they don’t get periods. They don’t put up with half of the shit we go through. Then there is double standard. Like for example: a male can sleep with as many females as he pleases and he’s "The man" but when a females sleeps with how ever many males she wants, we get called names. Also, when a female comes out and say she’s lesbian it’s sexy, but if a male say he's gay then he gets picked on.

I don’t think that’s right, we should be able to do whatever we want without anyone judging us. Same way how, in some countries, the females have to stay home and take care of the household and the kids, while the men go to work and do whatever they want. I want it be equal, that way we both can take care of the household and work.
Females have power when it comes to the bedroom; we have the power to hold off sex, and the power to get it whenever we want. It’s funny to me, how young guys go to the club thinking they are going to bring home a female and when they do, they think they’re the shit, but in reality, the girl is the one taking him home, because if you don’t know how to talk to the female you aren't getting her. It’s not easy to get a girl, we do play hard to get, we aren’t easy, we aren’t a prize that you can just win, and you have to work hard to get us.
As for a male, some males also play hard to get, so the one you want isn’t always available and he wants you to chase him. I can play that game too. I think it’s better to chase someone then just to be able to get that person with just a blink of an eye, it’s no fun. I think it would be a bit fun if I was a male for a day and my fiancée was the female for a day.

So yesterday, my fiancé and I did a couple of things that the opposite sex would do. He had to take care of the kids, clean the house, do laundry, and cook dinner. He said he disliked it. He loves the kids, but he couldn’t watch them and do all the other stuff at the same time, He thinks its ruff. He would clean and ten minutes later the room was a mess once again. The laundry he did a great job with, but as for dinner, I had to help him; he’s not a kitchen person.

Me on the other hand, all I had to do was work, eat, watch the TV, hang out with the "guys", made sure the kids listened to my fiancé, and that was it. I thought this was going to be easy, but boy I was wrong. I had to clean the pool, cut the grass, and help fix the car. I rarely do those types of things. I was exhausted, I took a shower, help hubby with the dinner and hung out with the kids, ate and watched re runs, (I dislike re runs), I didn’t even want to go out with my friends, so I stood home and spend time with hubby and the little ones, and tried to get as much rest as I can so I could make love to my fiancé, but he was a little tipsy from drinking and he was horny, so he did some of the work.

Overall, now I know as much pain and all the shit us women go through, men go through the same thing. So we are equal in a way, it may seem like the men got it easy or the women got it easy but it just showed me we both are strong and it’s not so fun being a guy after all. I want everyone that reads this to switch with their partner just for one day and see how you feel after that and let me know you’re thought on this.
Tags:
Views: 1292

ChuChii
Hello my fellow Kinky Friends,
Im Chuchii , im 27 , I love to try new things at least once and if i fall in love with it i stick with it.
Im always up so you can always ask me questions.
im very friendly,& outgoing. I love to write different types of stories :)