Past, Present and Future: The Shifting Legality of Abortion 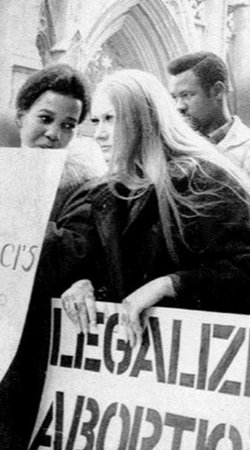 Copyright- New York World Journal Tribune, 12 March 1967.
What do we learn from our past and how do we implement those lessons in the future? America needs to take a look at statistics from our shared past before voting.

"Those who cannot remember the past are condemned to repeat it."

Current laws regarding women’s reproductive health, do not explicitly name women the property of their husbands, however; decisions concerning women’s access to abortion, sterilization and birth control are often placed in the hands of males. Attitudes towards legal abortion are shifting radically towards the negative end of the spectrum. According to New York Times, “in the first three months of 2012 alone, legislators around the country introduced 944 reproductive health-related bills, half of which were designed to restrict abortion access (New York Times).” Measures that restrict women’s choice threaten to overturn the forty years of progress made since Roe vs. Wade.

Law’s restricting access to family planning, or cutting funding to places such as Planned Parenthood; endanger the health of America’s women. Soon, politicians will be asking the American people to make informed decisions on the morality of abortion. Rather than debate morality, let’s look back to the laws of the 1960’s in order to understand the current shifting legality of abortion. The limitations placed on women’s choice in the 1960’s were far more restrictive than current 2012 legislature and may provide a picture of America’s future.

As a result of strict attitudes towards abortion, women in the 1960’s were forced to choose illegal and unsafe procedures in order to terminate unwanted pregnancies, “a million or so illegal abortions a year were performed on American women, with between 5,000 and 10,000 women dying as a result. Such abortions accounted for 40% of maternal death” (Coontz 11). These statistics highlight how few options women were given, abortion was illegal and in many states even married women faced difficulty receiving birth control. Even when abortions were illegal women still found ways to rid themselves of an unwanted pregnancy. The law simply prevented these women from having access to a safe, nonjudgmental facility and doctor. In 1965, the Supreme Court declared the United States’ refusal to provide married women with birth control unconstitutional. However, unmarried women seeking birth control and all women seeking abortions were still faced with laws barring their rights towards their own reproductive systems (Coontz 11).

After the 1960’s women’s rights became increasingly stable and women’s access to reproductive procedures and materials increased drastically. Women have always needed birth control and abortions and Planned Parenthood provides them a safe and affordable option. In order to seem fiscally conservative, politicians have attacked the budget of Planned Parenthood. The non-profit organization has provides low income citizens with STI testing, birth control, cancer screening, counseling, general health care, vaccines, and abortions. In 2008 Planned Parenthood’s entire budget was 105 million dollars, which is much less than the 150 million dollar a year budget that “Abstinence Only” programs received under George Bush’s presidency. Cutting costs to Planned Parenthood does not save money; rather, it makes it harder for the American people to receive affordable health care in a safe facility.

Statistics from the past are important in the understanding of the current political climate. Abortion has been recorded as an aspect of society since humankind began leaving behind documentation. In Pat Fox’s article she writes, “Abortion was recorded in 1550 B.C.E. in Egypt, recorded in what is called the Ebers Papyrus and in ancient China about 500 B.C.E. as well. In China, folklore dates the use of mercury to induce abortions to about 5,000 years ago. Of course, mercury is extremely toxic” (Fox). Women throughout history have used toxic drugs and measures, even knowing that they could be harmed or even killed. Just as in the past, Women today will resort to extreme measures unless safe procedures and drugs are available. According to the World Health Organization, abortions in the United States are now one of the most commonly performed legal procedures with the rate of maternal death at only .6% per 10,000. In the United States receiving an abortion is eleven times safer than carrying a pregnancy to full term; whereas, in countries where abortions are illegal, unsafe terminations are the leading cause of maternal death (World Health Organization).

When laws regarding abortions become more restrictive, maternal death rate correspondingly rises. Around the world an estimated 68,000 women die from unsafe abortions. Laws prevent women from receiving safe or sterile abortions but do not necessarily prevent abortions altogether. During unsafe procedures such problems can arise as the puncturing of the uterine wall, septic shock, hemorrhage, bowel trauma, genital trauma, infertility, pelvic pain, and death. The legalization of abortion in the United States has prevented maternal death; which, in the case of unsafe termination, is caused by a lack of medical knowledge and skill.

Today, abortion; as a legal medical procedure, is under attack. A New York Times poll found that 23% of the 1,300 people questioned preferred that abortions not be permitted at all, while 41% believed in the importance of “more stringent limits”. The poll also found that men were more likely than women to prefer limitations placed on abortion. This statistic is worrying, because only 23.3% of positions in state legislature are held by women (Congressional Research Service). If men are found to be more likely to support the illegalization of abortion and men hold 76.7% of state legislative seats, it seems that the current state of legal abortion may start to collapse. The legality of abortion may begin to revert to its 1960’s state and the maternal death will rise drastically, due to limitations placed on women’s choice.

If the current legality of reproductive health changes, women today, just like the women of the 1960’s, may be forced to seek unsafe drugs and procedures. Retrograde attitudes towards women’s rights may plummet us back into a country where unsafe illegal procedures become commonplace. The 54 million abortions that have occurred in the years since abortions have been legal in America have been performed in safe, clean environments. Let’s keep it that way.
Tags:
Views: 1468
Related articles