Sex & Religion: The Beautiful and the Damned 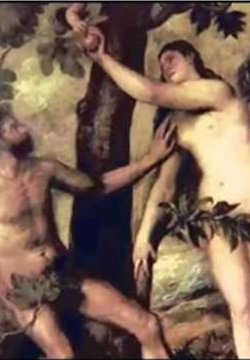 Titian, Adam and Eve, c. 1550. Madrid, Prado
People have touched upon Sex & Religion in a variety of ways. However, I think there is more talk about "don't feel guilty" and less about why people feel guilty despite all "logic." This article is partly personal in nature, but for those who still feel guilty despite all the sermons and debunking, perhaps the answer is that most of us cannot quite put our finger on where the guilt is coming from – and it might be a whole lot more than just religion in the water.

"Religion is probably, after sex, the second oldest resource which human beings have available to them for blowing their minds"

I grew up with God in my home. He was awake with my father at five in the morning when the rooster crowed, and His light filled the sky, causing me to roll over. He was with me at bed time, “look upon this little child,” and on Sunday afternoons. He was on billboards in my country and even on the radio that played regular music in the afternoon. He followed me on the plane to the US, but took a back seat somewhere along the way. I was still dragged to church on Sunday, but was never quite sure what I was doing there and I became interested in sex and somewhere along the way, I felt guilty about it. The last I heard about sex, I heard my mother call my sister a “slut,” and I later found out, my mother’s mother said the same thing to my mother when she was young.

The Bible tells me so...(New International Version) -Not my opinions

Exodus 22:19 “Anyone who has sexual relations with an animal must be put to death.”

Leviticus 18:1-29 This section says a lot about unlawful sexual relations. Most of it starts out with sexual relations that are incestuous in nature, but becomes questionable when in verse 19 it says, “Do not approach a woman to have sexual relations during the uncleanness of her monthly period,” and verse 22 says “Do not lie with a man as one lies with a woman; that is detestable.” Verse 29 goes on to say, “Everyone who does any of these detestable things—such persons must be cut off from their people.”

Matthew 15:19 & Acts 15:20 There is mention of “sexual immorality” being wrong, but no specification of what is immoral.

1 Corinthians 5:1, 9 It is Paul writing about sexual misconduct in the church (a man taking his father’s wife) and that the church won’t deal with it. He also says, “With such a man (one who is sexually immoral) do not eat.” Then in 6:9 he writes “Do you not know that the wicked will not inherit the kingdom of God? Do not be deceived: Neither the sexually immoral nor idolaters no adulterers nor male prostitutes nor homosexual offenders nor thieves nor the greedy nor drunkards nor slanderers nor swindlers will inherit the kingdom of God. And that is what some of you were. But you were washed, you were sanctified, you were justified in the name of the Lord Jesus Christ and by the Spirit of our God.” In 6:13 food is for the body, but “the body is not meant for sexual immorality, but for the Lord,” and 6:18-20 is a command to “flee from sexual immorality” and because our bodies belong to the Lord we are defiling our bodies by being sexual immoral.

Paul has a ton to say about marriage, but that is another article entirely. Paul does come back for one more go, calling out “sexual sin” in 2 Corinthians 12:21.

1 Thessalonians 4:3-6 “It Is God’s will that you should be sanctified: that you should avoid sexual immorality; that each of you should learn to control his own body in a way that is holy and honorable, not in passionate lust like the heathen, who do not know God; and that in this matter no one should wrong his brother or take advantage of him. The Lord will punish men for all such sins…”
Hebrews 13:4 “Marriage should be honored by all, and the marriage bed kept pure, for God will judge the adulterer and all the sexually immoral.”

Revelation: 21:8 AND if you are any of these things, including sexually immoral your “place will be in the fiery lake of burning sulfur. This is the second death.”

After reading all of these sections, taken out of the Bible about sex, people often ask, “Well how can you believe in God, if this is all he believes about you?” My common response to a question like this is two-fold and maybe even a little dodgy. “A man wrote the book, and as it concerns Paul’s section, a man who I feel had a huge chip on his shoulder, because look how little sex is discussed in the Old Testament. Also, telling me to abandon God is like trying to make you believe in God.”

Usually people respond to the first half of what I say mentioning the Song of Songs, however, Solomon is writing of an engagement. The bride longing for the groom, love sickness, the wedding, the brides fears and longings, the groom expressing his love, the marriage, the beauty of the bride and love. There is an article in itself I could write about Song of Songs, but my point is that this particular section of the Old Testament is pertaining to engagement and marriage and not necessarily sex.

But still, the question is, “Why then believe?” I believe because it has become clear to me that many things have been twisted into what people believed was good for their children or community, but later creeps up to haunt their sex lives and concept of self-morality. The reason why I say that the guilt is a bit beyond religion is that the guilt, in my own experience and those of others I have spoken to, becomes attached to other things. Things that happened when you were growing up especially, and because those things are harder to remember, if you are a religious person, it is easiest to use religion to try to make sense out of what is going on. But there are so many holes and clouds that you end up in a vicious cycle, never making sense of it.

So to someone who says, “It is so horrible that you feel so guilty,” I would say, “Yes, that is true.” However, remedying the guilt isn’t easy. People are victims of needing to have ways to make sense of things, and until there is another way to make sense of something, for the religious person and anyone who falls into one of Paul’s “categories,” feeling bad becomes a way of life.

But in order to end on a positive note, it does become easier. Self-reflection and exploration are important. Being a part of the Eden Community has been a wonderful way to get those things and I think more people should take advantage of what Eden has to offer.
Tags:
Views: 2090
Related articles

Ayumi
Regrets, I’ve had a few.
Most of them to do with you.
I should have shagged you on the floor.
In the kitchen; against a door.
I could have pressed you to a mirror,
And seen your sweat marks shine and shimmer.

P.S. If you are looking for a great mentor, check out PropertyOfPotter!

Other articles by Ayumi