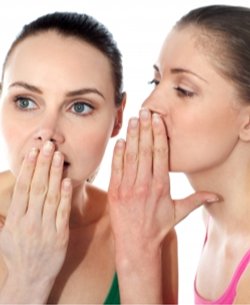 freedigitalphotos.net
You talk to your friends about a lot of things, is sex one of the topics? And how much of your sex life do you discuss with them? I'm still trying to figure out how much to talk about with my friends, but I want to figure it out.
Here at SexIs Social, the monthly theme is sexual freedom and whether social interactions influence your sex life. I think social interactions have some effect on our sex lives, and today I want to talk about the interaction with friends. You have good friends, I am sure. You have those people that you feel comfortable sharing, just about everything, with. I know that I do. I’ve known my two best friends for 24 and 22 years, respectively. We’ve been in each other’s weddings; I’ve been there when they've needed help, with no questions asked. There should be nothing we can’t talk about with each other. But sex is something that we don’t discuss very much.

We used to talk about sex all of the time, before we were actually having it. You know those nerdy high school boys who were obsessed with what was on Cinemax on the weekend? Yeah, that was us. So it’s not like we haven’t discussed sex in great detail before. But now that we are older and two of the three of us are now married and have children, sex is something we don’t talk about a lot. We talk sports, politics, religion, all the stuff you shouldn’t talk about, without fighting, but each time one of us mentions sex (usually me) we clam up. Maybe it’s because we’ve been friends for so long, or maybe we do so many things with all of the families that my best friends don’t want to look my wife in the eye - and think about that time I was talking about tying her up to the bed. I’m not sure, but it’s something I would like to discuss more. Because sex is important to me, I’m pretty much thinking about it all of the time. I write about sex, do reviews, and a good couple of hours of my day are devoted to sex-related things.

It’s almost the opposite case with my wife. She has two girlfriends that she met and started hanging out with a few years ago. She’s the only one with a child and it seems like every time they go out she comes home talking about sex, what they’re doing, what we should be doing, and then wants to jump my bones. I never have a problem with it. But I have found it very interesting that there is such a dichotomy between the two sexes. Are women more likely to talk about this than men? I never thought that would be the case, before I noticed this trend.

And it’s not like my wife and her friends just mention sex, here and there. It seems like they spend a good portion of their time together talking about sex and what books they’re reading. (1 out of 3 liked “50 Shades” but they all have now experimented with BDSM because of it.) What their partners like, what they like. My wife usually has a fresh idea for the bedroom, when she comes home from these outings, because of something one of her girlfriends has tried and liked. I’m grateful that they are so open with each other; it has helped my wife loosen up sexually. In the last year she’s made a big change in her comfort level with sexuality and I definitely contribute some of that with their discussions.

Sex plays a large role in people’s lives and I find it strange that people don’t talk about it, at least occasionally. When I'm one on one with my friends, sex is a little more of an open topic, especially with my married friend. But usually he’s complaining about the lack of sex that he’s having, and I always feel somewhat guilty about my sex life and tell a white lie - and agree with about it being so infrequent. I shouldn’t feel guilty that my wife and I have an incredible sex life. I should be able to share my thoughts and feelings more freely. Perhaps it’s because we’ve been friends for so long.

In an ideal friendship, you should be able to talk about sex freely. What you’re enjoying, what you’re hoping to explore; all of these things and more, are important to you. I don’t think you should have a play-by-play about last night’s activities, that might cross the line with some people, but having another outlet for your thoughts is a great thing. I’ve watched it with my wife. We have become more open with each other about sex and what we enjoy. She’s shared a lot with her friends and it has helped her discover new things that she wanted to try, but also made her feel more normal. I say this because she wanted to try certain things and when her friends admit that they’re trying new things in the bedroom that she’s been interested in, she doesn’t feel like she’s doing something way out there. Ideally she shouldn’t feel this way anyway, but society’s norms still weigh on her.

I remain hopeful that my buddies and I will one day be able to talk sex a little more openly. Until then, I’m going to keep prodding them slowly and listening to my wife when she returns from her outings, with her girlfriends, enjoying the side benefits that come with it. In fact, maybe they need to schedule another girl’s night out soon.
Tags:
Views: 1377
Related articles